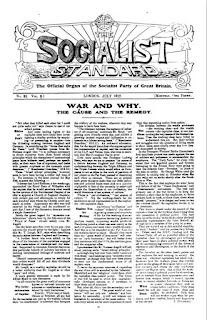 From the July 1912 issue of the Socialist Standard

The report of the I.L.P. Conference of 1912 is introduced with a triumphant leading article, in which we are informed that “not once was there wrangling or discussion. ” The reason, of course, is not far to seek. Those who would have raised dissension had taken themselves elsewhere. The successful “ Labour ” M.P.’s have, for the time, got rid of their discontented rivals, who have a long road to travel for Parliamentary jobs, in their new party, the B.S P. The Conference was free, as Mr. Keir Hardie put it, to “guide the wavering steps of the working class movement along the pathway that leads to freedom.” The stirring speeches, intense enthusiasm, fervid pleas for freedom, scorching denunciations of diplomats and financiers,” were vented ad lib.

Such things things tickle the ears of the idealists.

The message of the I.L.P. to the workers in 1912 was a re-hash of the old confusion. Mr. P. Snowden contributed his share. “He re-emphasised the revolutionary movement, though he ridiculed the fear of the wealthy classes.” “A revolution,” he explained, “ is a very common and ordinary thing. Every time a wheel turns round we have a revolution.” It would be interesting to know haw many I.L.P. revolutions will be necessary before we get Socialism.

Indignant protests were levelled at the Government over the Tom Mann and Malatesta affairs, while the Malecka business was deemed of sufficient importance to necessitate the “threat to break off diplomatic relations between Russia and Great Britain.”

Having passed a resolution to that effect, they followed it with another against “militarism in all its forms.” Sufficiently pugnacious to “ loose the dogs of war” because one woman had been imprisoned. they wore at the same time “ the strongest advocates of peace the world over.”

In the Socialist Standard evidence has been adduced lime and again of the compromising tactics of the I.L.P. Time and again have they themselves admitted that their members' subscriptions would not suffice to contest more than two constituencies. Suffragette capitalist gold and ''wise arrangements with the Liberals" we have always said, secures them seats in Parliament. It is well to remind the reader of our attitude toward them, and their own admission that “those who pay the piper call the tune.” Their discussion and vote on the Bradford resolution confirms all we have said of their sham independence.

That resolution is itself the strongest, possible indictment of the Party. It resuscitates the burning question of the “fourth clause," which by their votes they again repudiated. That they should ever discuss the advisability of “ignoring consequences and voting steadfastly on the merits of every question” is an admission that they have been afraid to do so. Their speeches show what they fear.

Lansbury said : “Every question that comes up for discussion in the House has to be discussed with its probable effect upon the fortune of the Government in mind.” Snowden’s “fighting instinct inclined him to support the resolution, but his common sense, judgment, and experience would induce him to vote for the amendment. . . . Politics meant compromise.” Keir Hardie tried to reconcile their oft asserted independence with the stern necessity of rejecting the resolution, and wound up with this transparent bluff: “The great test of a party's independence was not in the vote on some trumpery measure before the House, but in the amendments moved to the King’s Speech. On every occasion the Labour Party had pressed a Right to Work amendment to a division.”

Really, their audacity almost takes one’s breath away. This is the great test of their independence: moving amendments to the King’s Speech which have no chance of success and would not be moved if they had, and moreover would not improve the lot of the working class if they were successful.

The reforms that have done service so long were brought out once more, shown to be fallacies, and then seriously recommended to the Government, and adopted as planks in their platform. A minimum wage resolution, for instance, was passed, although it was clearly shown that its effect would be keener competition, the selection of the most efficient, the introduction of new machinery and increase of unemployed.

Bearing in mind the number of converts the I.L.P. gather from the professional and well-to-do “classes,” one naturally looks for resolutions on nationalisation, because it extends the Civil Service and finds jobs for would-be aristocrats of Labour and Fabian experts. Mr. Lloyd George quite recently declared nationalisation of mines to be a business proposal. He has the opportunity of “killing two birds with one stone”; giving satisfaction to his I.L.P. allies and at the same time doing a good stroke of business for the class he represents, by nationalising land, mines, and railways

Similar absurdities and contradictions could be traced in almost every paragraph of this report. It requires no deep or profound knowledge. The average man with an average supply of common sense and an inclination to think, could not be led into the Liberal left wing with such palpable rubbish. Any man with common sense would realise that none of the problems of life are to be solved with sentiment; that in the study of Socialism, as with all studies, we only accept what is self evident. The mesmeric influence exercised by I.L.P. leaders merely inflames and excites the minds of their followers. The way to lean Socialism is not by studying capitalist politics and trying to adapt them to working-class needs. To learn Socialism we study Socialism, not something else. Members of the working class have to commence with the elementary lessons the basic principles of Socialism, before they can understand capitalism and how to get rid of it. These basic principles the I.L.P. use their very utmost endeavours to obscure and hide from the working class. The reason and the moral are equally obvious.