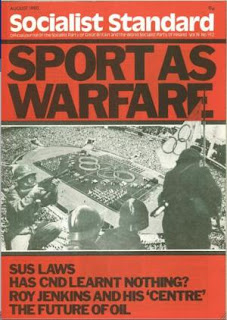 Humbug & Heffer
In our May issue, we had a piece referring to the murky Stalinist past of the Labour MP Eric Heffer, who has now announced his intention of entering the race for the leadership of his pseudo-socialist party. As late as 1953, after the death of Stalin, he was extolling the virtues of the monster who had done to death millions of Russian workers in the process of building up the power of the state-capitalist regime. In the Guardian of June 28 there was a long interview with Heffer by John Torode, complete with the usual description of his fondness for smart clothes, good food and fine wine. (It is beginning to seem as though a would-be leader of these pseuds has first got to prove that he has all the worst attributes of a capitalist Pig.)

In the course of the article, Heffer is quoted as reviling the Fabians (who are of course members of his own party) as being “the other side of the Stalinist coin” and went on to remind readers of the way the Webbs had swallowed Stalin. No readers of this journal will have any illusions about the Webbs or any of their ilk; we have on many occasions publicised their appalling views, which fitted so ill with their claims for the Labour Party as a guardian of democracy.

There was never, at any time, the slightest excuse for the Webbs to eulogise Stalinism in the teeth of all the evidence of its atrocities. But by the time Heffer did his grovel, even those who had fallen into the Stalinist trap had, in the main, realised what a murderous dictator he had been. But not Heffer he was still kissing the dead tyrant’s feet. And yet here he is, a quarter of a century later, having the gall to criticise his fellow Stalin-lovers.


Workshy myth
This too is a headline taken from an article in the press (Guardian June 28). It is not bad enough that workers are made redundant (apart from those referred to in the previous note who cannot be thrown onto the scrap-heap because they simply live there and know- no other home). They have to be insulted as well. Workshy, lazy, do better on the dole than working. And the insults are not hurled merely by the capitalist class. All socialist propagandists will be familiar with members of our own class who are all too ready to heap insults on fellow members even less fortunate than they are. (They forget they are always liable to join them!)

Of course it is true that some jobs are so badly paid that workers can actually do better on social security. A fine advert for capitalism that is, to be sure. But the report in the Guardian made it clear that “the vast majority of the unemployed experience serious financial difficulty . . . on average their benefits total only 44 per cent of their former earnings”. We are further told that the “mean benefit” (le mot juste!) for men is the vast sum of £26.34 per week. Also that only 19 per cent get redundancy pay from all sources totalling more than £200. Riches indeed.


Bitter price for youth to pay
The above heading is not our own, but appeared over an article by Shirley Williams, the former Labour Minister of Education, in the Observer (June 29). The article was on the subject of youth unemployment, the fearful prospect facing thousands of school-leavers of never having the privilege of becoming an employed wage-slave. One of the gems offered by Williams was that the government should pay special benefits to young people engaged in training or further education at least on a means-tested basis.

The very term “means test” was always calculated to make a Labourite foam at the mouth, and yet here is one of their own leaders advocating it — and not a single twitch in the paper’s letter columns. In all of its 700 words, there was not room for one single mention of the word socialism. How can someone like Mrs Williams pretend to be a socialist and yet manage to deal with ways of solving capitalism’s problems without even mentioning the word? Let alone understanding what it means.


Make sense of this
In Portugal there is a Conservative government acting under a recently enacted constitution whose second clause provides for the “transition to socialism”. (Taken from an article in the Times Literary Supplement of July 4 which points out that nowhere in the constitution is the term socialism defined!)

“What Mosley so valiantly tried for, could have saved his country from the Hungry Thirties and the second world war.” Michael Foot.
“Mosley is a superb political thinker, the best of our age.” A. J. P. Taylor.

Now it is well-known that Mosley is the hate-figure supreme of the Left. It is equally well-known that Foot has been a leading Leftie since time began and is now deputy leader of the Labour Party; and that Professor Taylor, that great historian, has also claimed to be a socialist. So it is possible that you might think the above quotes are figments of an overheated imagination. They may be incredible but they are still true. They are taken from the same edition of the TLS of the previous note and are part of the blurb to an advert of Mosley’s memoirs. Further comment would be superfluous.
L. E. Weidberg
Posted by Imposs1904 at 2:31 PM

I believe Weidberg did Heffer a disservice in this column. Though Heffer as a young man had been a member of the CPGB, I'm not sure he could be characterised as a Stalinist in the 50s. I believe he worked politically with Harry McShane during this period, and McShane had broken from the CPGB in the early 50s because of his increasing disquiet about the CPGB and the Soviet Union.