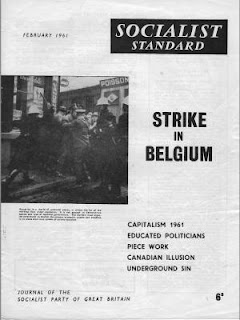 From the February 1961 issue of the Socialist Standard

So an Army commanding officer banned his troops from viewing the television programme, “The Army Game”, on the grounds that it “appears to portray little that bears any relation to the present-day Army.”

But would Major Bill Cook really approve a true depiction of the Army—whether of today or of earlier days of the present order? Would he like to see revealed, for instance, the purpose of armies in current society? If so, he can well be accommodated by socialists.

The workers, on the other hand, have no such means and implements of production, and to secure food, clothing and shelter and provision for their families. must offer for sale to the owning class their mental and physical energies. The price (or wages) paid for these energies are at a level that will roughly purchase the necessities of life. But those very energies (or labour power) are bought for working spells more than sufficient to produce the value of the wages paid for them. In a five-day working week this value may be produced by the end of the third day; the value produced on the fourth and fifth day. therefore, is a value in excess of the workers' labour-power value and thus the wages that represent that value in monetary terms of the food, clothing etc., required for the restoration of expended energies. This excess is thus a surplus value congealed, as it were, in the products (or commodities) the workers have produced for their masters. Surplus value, with the sale of the commodities incorporating it, is realised as profit; which, by continually flowing to the capitalist class enables them to further capitalise their businesses and live without the necessity of working.

Thus one sees the capitalist class as a relatively tiny section of the community, but a section which enjoys benefits denied to that much larger section, the working class. And added to the economic advantage of ownership of the productive means goes the political advantage of a State apparatus, the machinery of government, which since the birth of capitalism has carried out its appointed function of preserving the social set-up, and of conserving the masters' monopoly of the wealth produced by the working class. Included in this State apparatus are the coercive and armed forces which, possibly when all other official influences have failed, will be called upon to protect or restore “law and order” against any development likely to interrupt capitalism's normal productive and distributive processes or to subvert in any way the privileged position of the capitalists over the workers. And among the armed coercive forces, of course, is the Army.

As a force intended to be the last resort “persuaders” of large numbers of people—hungry and desperate strikers and unemployed demonstrators as in some cases—the Army is provided with weapons and taught how to use them. The result is that, in cases of threatened subversion etc., the Army is an efficient repressive force through its trained ability to maim or kill. Whether or not years elapse without such measures being applied, this remains one of the purposes behind the Army's existence.

There, then, lies the capitalist need for armies in the country of their being. But each national capitalist grouping also needs an armed force to defend or further its interests outside its homeland. Behind each of these national groupings, whatever the nation encompassing it, lies the pressure of competition. American capitalism contends with Russian, British with German, French with Japanese—indeed, each nation contends with all others in a quest for markets by which to sell its commodities, which have been produced by the workers of each competing country.

Hence between the national capitalist factions, there exists a struggle for markets, but for each competitive needs as cheaper fields of exploitation, economical trading routes, and all the other advantages that will enable their possessors to offer their commodities at competitive prices. Often the acquirement of these advantages can be effected only by filching them from rivals. From the diplomatic moves, the changing strategies, there come the international crises, the tensions, the cold wars—too often to end in a hot war.

If is then that the Army of each country concerned is ordered, with the other armed services, to carry out its function as the protector of the foreign interests of its native capitalist class. Not that the protection of capitalist interests will be the reason given for hurling masses of young men, mostly members of the working class, into bloody conflict against other masses of young men, similarly mainly workers. The various propaganda machines will manufacture high-sounding excuses. The war is a fight for “democracy over autocracy”, for “breathing-space”, to defend “the rights of small nations”. Augmented now by hosts of wartime conscripts the task for each army is to wreak what havoc, destruction and death it can upon the armies of the “enemy” countries. For no other reason than that they have been ordered to do so by their respective governments, man kills man so that his masters' trading interests are furthered or at least protected from damage.

One can scarcely expect a socially progressive and enlightened development among men trained to carry out the anti-social act of war. Certain it is that many of those whose military job is to make “good soldiers” are of necessity tyrannous and not far different to “The Army Game’s” Sergeant-Major Bullimore.

But perhaps this portrayal is too realistic for Major Cook. However, the Major need have no fear that “The Army Game” will in any way harm the Army. The Government, as the virtual executive committee of British capitalism, will see to that.