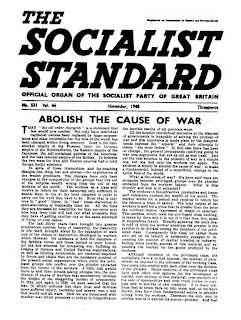 From the November 1948 issue of the Socialist Standard

For months past much space has been taken up in the daily press to condemn the “unofficial” striker. The Editorials vie with each other in vilifying the “Reds” who are behind all these movements. The Daily Mirror, whose contribution to the culture and art for the people, consists of Jane, Ruggles, and Buck Ryan, is among the latest to join up in this tirade. Though their daily slogan is “forward with the people," their sympathies seem to lie more with our masters in their drive for more and harder work for the worker. Accordingly, their Editorial (17/9/48) welcomed “the sign of deep responsibility in the Trade Union movement as a whole that the proposal for a token strike among the engineers as a protest against the recent wage award should have been turned down." It went on to mention how the “respectable” leaders have influenced the majority to proceed in the constitutional manner, and keep on working hard while negotiations are carried on. “Unfortunately there are places where the reasonable view did not prevail”— it goes on—“and despite the ban by the A.E.U. on unofficial strikes, certain men in Glasgow have called token stoppages for Monday.”

“Now what is behind this minority movement? ” asks the Daily Mirror. “ Possibly’’—they think— “some of the men are unaware that the 'rebel policy' within the Trade Union movement is inspired all the time not by industrial but by political motives.” Considering that all the wealth of the world is produced by the application of the workers’ energies, physical and mental, to the nature-given materials, through the use of machinery which he has in the past produced, there is nothing “unreasonable” or ”unofficial” about the use of his only weapon (the strike) for demanding a larger share of what is produced by his energies. Even more so, when one considers that from the total of wealth produced he receives on the average just sufficient to keep him in that physical state to keep on producing more and more wealth with a view to sale and profit. His share, one might say, is just the grease to keep the “machine” going. The Daily Mirror mentions political influence. Well, it is possibly correct that “Communists” wish to gain control in the Unions to further their political line, but to assert that their influence is so much that they can be all over the country at the same time is more likely to flatter them and give them much undeserved publicity. Strange that no one ever mentions a Tory minority in the Union movement out to embarrass the Labour Government! The charge would, of course, be equally ludicrous. With the slow progress of negotiating machinery, and the meanwhile rising costs of living, the worker "feels” the reduction in his standard of living. No "minority" has to tell him that. He organises and discusses strike action, according to the degree of his class-consciousness and militancy. One notices that the deploring of these so-called unofficial strikes always comes from those who are secure in their four square meals a day and in their home, and servants to attend them. Of course the press is always full of the harm to the “public” or the “community,” as if the worker had never known anything but "comfort” and “security” all his life !! What they never mention is that profits are threatened and as they (the press) are supporters of the capitalist system they must needs protect that system and invent all kinds of phoney phrases to keep up that support. As socialists we say that while there is capitalism there will always be strikes, ”unofficial” or otherwise, but at the same time we say the greatest need of the moment is to organise for socialism, a system vastly different from capitalism, and one in which all the means for producing and distributing the wealth of the world will be the common property of all mankind irrespective of race, colour or sex. Then there will be no more need for unions, or strikes, or disputes. Everyone will have free access to what is socially produced. There will be no need then for a “minority" to “rock the boat” (as the Mirror puts it). The "majority” will have sunk the “rotten boat” of capitalism, and settled on the ”new liner” of Socialism.