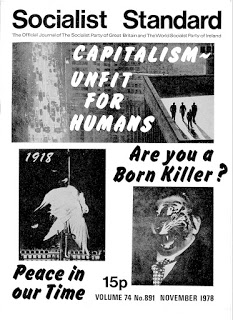 From the November 1978 issue of the Socialist Standard

Urban crises; Dockland rehabilitation; Housing problems; Educational choice; Urban renewal; Transport co-ordination. These phrases drip from the lips of pompous politicians and the pens of ‘specialist’ journalists to the point of sheer boredom.

They speak and write about the world in which we live, or at least those features of it they think are problems needing solution. Without always knowing it, they are referring to aspects of the capitalist set-up. Its hallmark of class ownership of the means of production; its wages system; competition, profit motive; market economy. This system has been operating for a long time — far too long for us Socialists. Over decades it has developed on a world scale, more intensely in some areas than others. We have seen the growth of large cities to the point where they encompass all the frustrations of modern life: slums; traffic jams; pollution and an ever increasing housing problem.

We are talking about LIFE for the working class. Not just from when we get a job, but from the moment of birth to the moment of death. Let us look at some aspects more fully, bearing in mind that they are part of the social fabric. They cannot be dealt with in isolation; one relates to the other. Even if you have a roof over your head you cannot escape the housing problem. But it is a social problem affecting hundreds of thousands, concentrated mainly in the large cities. As the Daily Express said (July 24 1978), “After 33 years of post-war development, housing is still the great British disaster story . . . the statistics of human distress are grimmer than ever”. Efforts by political parties to deal with this problem have failed. What they have done in many cases has foundered on the rocks of ‘an economic figure for building’.

Houses built in the 1950s in the New Town of Corby, Northants, recently handed over to the local council for administration, need replacement of all windows and repairs to brickwork, chimneys, roofs etc. Nine thousand houses in all need an urgent repair programme costing £4 million. “The condition of New Town houses is regularly being found to stem from bad basic design” (Guardian 27.7.78.). In short, working class housing is built as cheaply as possible. A more recent case concerns nearly five hundred council homes at Ashford, Kent, built in the late 60s. Total repairs are in the region of £2 millions, but the council are debating whether demolition would be cheaper. At the other end of the scale, a house in Cadogan Square, London is on the market for £1¼ million; it has of course been renovated.

Liverpool, with a housing problem second to none, has long been the football of feuding councils. Flats and houses by the thousand are being offered for sale. Not at £1¼ millions each, but at 10p and 5p. In fact, any offer will be considered. Most have been vandalised, but as the report of Liverpool Housing Committee said last year, “Because of their reputation, location and design, they will now never make any positive contribution to meeting the housing needs of the city”.

The Royal Borough of Kensington and Chelsea, which numbers among its residents none other than Princess Margaret and the Soviet and other Embassies, has a waiting list of nearly eight thousand families for rehousing. (Her Royal Highness and their Excellencies, the various ambassadors are not on the list). The Borough posess some of the worst and most overcrowded housing in London. Housing Charities such as Shelter are constantly bemoaning the fact that the Council will not take its finger out. Isn’t it time they realised, Councils are not there to solve this problem, despite what various Acts might say.

The Inner London Docks have been a headache for years. With a revolution in the handling of cargo (containers, unit loading etc) the demand for traditional facilities has fallen away. 8½ square miles of dockland is to be redeveloped, and with the latest overtures from the Port of London Authority to close further docks, the area available may be much larger This development plan has long been a pipe dream. The overall cost is £233 millions to include 9,000 houses, industrial sectors, better transport etc. Industry is to be encouraged to come to the area after years of Government policy to get industry to move out of London into new development zones. The nine thousand houses are estimated to cost £98 millions. About £11,000 a house — a ‘reasonable’ figure for a working class residence.

Training for life
If you’ve got a house, what about a job. Jobs in the big cities are becoming harder to find. Unemployment is knocking around 1.6 millions and there is an even chance of this increasing by another ¼ million over the next year or so. This is no passing phase. Unemployment is part and parcel of this system and many commentators and politicians now refer to it as a structural part of society. But they keep trying new ways to lessen the impact. The Government, among other schemes, have recently announced a new £1 million training programme in ‘life and social skills’ for about five hundred youngsters in the Liverpool/Manchester areas. Called Training for Life, it will give these people a chance to study banking, finance and social and legal rights. Plus courses on sex and coping with freedom. The scheme is aimed at the hardcore of young unemployed people, who have few or no academic qualifications and who may only expect to get low paid manual work. Anything to take them off the labour-market. They should be told of the many young people, with University degrees, who have little hope of a job involving the subject in which they have qualified. Was our Prime Minister being a little more honest than usual when, as Foreign Secretary after a Brussels Conference, he said that the Commissions analysis “will show how a serious structural unemployment situation is developing”. The Commission had formed a committee to look at the problem of unemployment, and honest Jim stated . . . “None of us has any answers, and I do not suppose they have either (Guardian 14.12.76).

You’ve got a house and a job. Your next worry is getting to and from work. As men shoot to the moon at unbelievable speeds, the journey from Hackney to Piccadilly or Willesden to Victoria becomes increasingly difficult. And if you live in the country, a car is almost essential to get and keep a job. Roads in the cities are cluttered with private cars, a large proportion of which are company owned. Hundreds of travellers and reps chasing around for business. And as the juggernauts thunder their way across the country, the British Road Federation claims that cutting back the road programme is costing British industry millions every year and endangering road safety. Their claim that lowering design standards on trunk roads threatens more accidents is possibly true, but accentuated by the need of profit.

To get from one place to another in the shortest possible lime is assessed in monetary values. If capitalism is to continue, with its constant need for trade, we can envisage this island as a criss cross of concrete runways. But for a brief moment think of more leisurely ways of transport — the slow moving canal and its low slung barges. The Government are to reconstruct a section of the Sheffield and S. Yorks canal, enabling barges of 400 tons capacity to reach Rotherham. The waterway is already there and could eventually link up with the Port of Hull for large barge consignments. But the dockers, seeing their jobs threatened by a revolution in barge traffic (akin to the development of contained traffic), look askance at the scheme. Canal transport obviously has a role to play in any society and a less pernicious one when it comes to pollution safety etc, but here is a classic example of the conflict among workers on the industrial field, when capitalism dominates their ideas and the way they live.

Cost effectiveness
The house, job and transport are fixed up. Now there’s the kids schooling. Discussion still runs riot on the effectiveness of comprehensive versus grammar schools. But what about those in the villages, with the old Victorian buildings and, in many cases, sanitary accommodation that leaves much to be desired. In many ways the school is part of a village community. But says capitalism, Big is Beautiful and certainly Big is more economic according to the experts. Over the past ten years, it is estimated that more than 2,000 primary schools with fewer than a hundred pupils have been closed down and the properties put up for sale. The closing of such a school is not just the end of education for kids on their ‘home ground’. The premises are often used for a range of community activities. Capitalism has little thought for people. Can we afford it; does it pay, is its constant theme.

So a couple of weeks holiday. There are some nice beaches in Brittany and East Anglia, but both have been the scene of devastating pollution by oil spillage from crippled tankers. A problem that could be tackled using all the resources at our disposal. But the Department of Trade, Marine Division says, “To be always prepared for the worst would cost too much when it comes to oil pollution disasters”. But the Department is not letting the matter rest. Every effort, they say, should be made to prevent accidents which cause pollution. You will be pleased to know another committee is looking into this.

So, as old age silently creeps up on you, don’t think you can opt out. An independent body, Personal Social Services Council, set up by the Government to advise them, claims that the pace of developments in services for the elderly, mentally ill etc. is far too slow to meet increasing demand. And that it will take 14 years to reach Government guidelines of 200 meals-on-wheels per week, per 1,000 elderly people. So try and hang on until 1992 if you are over 65.

The world is rich and underdeveloped in many ways. The greater part of Japan consists of unused forest-clad mountains, while vast areas in Australia consist of unused deserts and semi-desert. As Arnold Toynbee in his book Cities on the Move says . . .“The proximate reason why, in both countries these tracts are unused is that the cost of transforming them into economically productive areas would not bring adequate returns”. And this world is owned by a few. Why not consider the possibility of us, the producers in this world, taking it over and running it in the interest of all, with human needs the dominant factor.
Cyril May