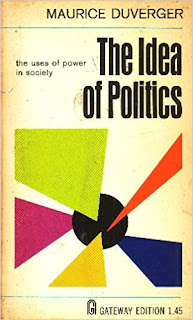 Book Review from the July 1966 issue of the Socialist Standard

The Idea of Politics by Maurice Duverger. Methuen and Co. 16s.

The French political scientist Maurice Duverger examines in this textbook such questions as What is politics? What causes political conflict? What form does political conflict take ? In two hundred or so pages is given a clear and concise account of the various answers given to these questions by the conservative, the liberal and the socialist. Regular readers of the Socialist Standard will straightaway be able to sec the word Marxist is used in a way we find unacceptable, to refer to the distorted version officially sponsored in Russia. ,

Duverger claims to be a socialist. However by Socialism he understands public ownership or control of industry, overall planning and the like, i.e.. the watered down state capitalism our Labourites (now increasingly only in private) call Socialism. He advances the theory that “East and West are developing along convergent lines towards democratic Socialism”. The East through liberalization and the West through the growth of planning and through the owners becoming mere figureheads on the economic field, as kings have become on the political. True there is a trend towards political democracy in the East and towards more state control in the West but the end won’t be Socialism. Socialism will only come when workers throughout the world take conscious, political action to get it.

Duverger recognises that the state itself is based on violence: "ultimately it rests upon police, army, prisons, and hangmen”. The state doesn’t suppress violence; it concentrates it in its own hands. “Physical violence is replaced by legal, constitutional violence, violence perpetrated with clean hands". This centralization of the means of coercion makes certain forms of political conflict which were popular in the past, like the street battle and the coup d'état, outmoded. (Even in countries now at the stage Europe was in the 19th century protracted guerrilla warfare has replaced the coup.) The Socialist Party has long realised that the growth of the power of the state has meant that the only practicable way for the working class to get political power in the developed capitalist countries is through the vote backed of course by understanding.
Adam Buick
Posted by Imposs1904 at 11:21 AM