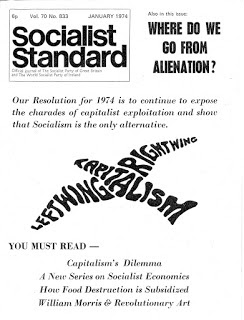 From the January 1974 issue of the Socialist Standard

From the time of his first arrival in England Marx was surrounded by what was then the most advanced section of capitalist society in the world, and the one showing the greatest contrast between affluence and abject poverty. There were available to him numerous works on economics and government reports, all of which Marx made use of and acknowledged in his book Capital. The following quotation from Vol. I demonstrates this:


Once for all may I here state, that by classical political economy, I understand that economy which since the time of William Petty has investigated the real relations of production in bourgeois society, in contradiction to vulgar economy, which deals with appearances only, ruminates without ceasing on the materials long provided by scientific economy, and there seeks plausible explanations of the most obtrusive phenomena for bourgeois daily use, but for the rest, confines itself to systematizing in a pedantic way, and proclaiming for everlasting truths, the trite ideas held by the self complacent bourgeois with regard to their own world, to them the best of all worlds.

To Marx capitalism is a system of commodity production, and commodities are the unit of capitalist wealth. The Marxian analysis of capitalist production commences with the analysis of the commodity. A commodity is a useful article, a use-value, produced not for its usefulness to its producer but for exchange. Masses of commodities are put on the market where they exchange for one another. The equation of commodities with diverse use-values in exchange implies the possession of some common quality, otherwise equation would be impossible. All commodities, whatever their differences of use or appearance, are the products of labour: all of them embody a certain amount of human labour and so can be equated with one another.

There are many different kinds of labour, such as the labour of the tailor and that of the miner; they are but different ways of expending the mental and physical energy needed for the production of social wealth. Commodities not only exchange, but exchange in definite quantity—two tons of coal may exchange for one suit of clothes, and not two suits for one ton of coal. This quantitive exchange relationship of commodities is determined by the relative values of the commodities exchanged. A commodity has value to the extent that it contains social labour. In the illustration just used, a suit of clothes is twice as valuable as a ton of coal because there is contained in the suit twice as much social labour as in the ton of coal.

It must not be imagined that Marx argued that the time taken by an individual to produce a commodity determines its value: that would mean otherwise identical commodities produced in different times having different values.

Capitalists do not buy Labour
The capitalist system of production is a system of profit-making. The capitalist expects to, and usually does, receive a greater amount of money at the end of the productive process than he originally put into it. If, as has been stated, commodities are exchanged at their value, the commodities produced for and sold by the capitalist must have a greater value than those purchased by him (raw material, machines, labour-power, etc.). Moreover, the increase in value must take place during the process of manufacture, in which process the commodities he purchases are turned into the finished product he sells. The increase in value implies the addition of labour. But does not the capitalist buy labour along with the raw material, machinery and other means of production, as a commodity at its value?

The capitalist does not buy labour; the commodity he buys from the worker is labour-power. The distinction between labour and labour-power is not a quibble but a fundamental distinction. The power to work or labour is what the worker sells, not the actual work he performs for his employer. Labour-power is a peculiar commodity because it has the power to produce a greater value than its own. The value of labour-power is determined by the value of the necessities for its own production. For example, a worker who consumes commodities containing four hours of labour can work for eight hours, and by so doing creates twice the value of his own labour-power. Because the capitalists have monopolized the ownership of the means of production, the workers are forced to sell their labour-power to them in order to live. In other words they are able to exploit the peculiarity of labour-power described above, and to take from the worker the surplus value created in production.

The existence of a free working class is a necessary condition for capitalist production. Before the workers could be turned into wage-slaves they had to be “freed” from the land and the instruments of labour: they had to be property-less in the means of production. In England this was accomplished by ejecting peasants from the land, and the seizure of common lands. There was thus created a class with no other means of existence than the sale of labour-power to the capitalist employers.

Once there exists the relationship of wage-earner and capitalist, it tends to perpetuate itself. By spending his wages as he must, the worker is forced continuously to sell his labour-power. The capitalists, because of their monopoly of the means of production, are able continuously to buy it and appropriate the surplus-value it creates. This surplus-value is divided into rent paid for land and buildings, interest paid for loans of money, taxes paid to the State for services performed on behalf of capitalism as a whole, and profit. Part of the profit is consumed by the capitalists, and part is reinvested in production.

The rate of reinvestment of profit is determined not by the whims of individual capitalists but by social forces over which they have no control. Competition and market conditions tend to reduce the prices of commodities. To meet this threat without reducing profits, capitalists endeavour to enlarge their businesses so that the costs of production can be reduced; this means the introduction of more efficient machinery, the speeding-up of the work process, and the effecting of economies made possible by large-scale production. Those capitalists who fail to do this will be in danger of being forced out of business.

The growth in size of businesses makes competition even more severe. Small concerns are always in danger of failure; only the largest and best-equipped are able to survive the struggle. Competition, by killing-off the small and less efficient concerns, concentrates control in the hands of relatively few large capitalist monopolies and also causes a continuous improvement in technique and an increase of productive capacity.

However, the same growth creates many problems. At first it requires an increase in the numbers of workers employed, but with advancing technical improvements the rate of employment falls whereas the rate of increase in the numbers of the working class tends to rise. Though these tendencies are offset by others, they are always at least potential pressures against the perpetual need of the working class to be employed. At all times the market for labour-power is subject to the factors which cause market conditions for all commodities to fluctuate. The capitalists have to look for fresh markets in non-capitalist (i.e. undeveloped) countries; and finally the whole world is brought into the stream of capitalist economic life.

Constant and Variable Capital
Technical improvements change the composition of capitals. A larger share is invested in means of production (machines, raw materials, etc.) called by Marx constant capital, and a smaller share in the purchase of labour-power or variable capital. This changed composition produces very important results. The capitalists reckon their profits on the whole of their capital, and any increase of capital that does not result in a corresponding increase of labour-power employed (since that is the only commodity which can produce surplus- value) results in a fall in the rate of profit.

A capital of £100, of which £80 represents constant and £20 variable capital, produces a surplus of—say— £20 and a rate of profit of 20 per cent. A capital of £200, of which £180 represents the constant capital and £20 is the variable capital, with the same exploitation of the workers, will still only produce surplus-value of £20: which means a lower rate of profit, that is 10 per cent.

As more and more capital is assuming the shape of machines (constant capital) and in proportion less is being invested in the purchase of labour-power (variable capital), it follows that the rate of profit is a falling one. In the highly industrialized countries, despite the intensification of exploitation by speeding-up and other methods, there is a continuing long-term tendency for the rate of profit to fall. To help overcome it, capitalists export capital to less advanced countries where the proportion of labour-power required in relation to the total capital is high and, as a result, the rate of profit is high also.

As the capitalist industrial system spreads over the world, the problems become wider in extent and more severe in their effects. To protect their interests the capitalists are compelled to form trusts, combines and mergers, and endeavour to restrict or eliminate competition and to restrict production to the requirements of the market.

Though the main purpose of these moves is the abolition of competition, it is never accomplished. Trusts and combines are usually national or semi-international in scope, though we are now witnessing the growth and power of multi-national concerns. Though all the producers supplying home markets might be organized in trusts, the capitalist market is the world market, and there the national and semi-international trusts struggle against one another. The effects of such international competition are far more harmful than those of competition between numerous small concerns. Thus, the contradiction between the order and efficiency of production, and the anarchy of the market, becomes and is irreconcilable: the economic crisis becomes a feature of capitalism. The contrast between the relatively increasing poverty of the working class and society’s increasing power for producing wealth becomes greater, as does the contrast between the social character of production and its private or class ownership and control.

In order to resolve this contradiction, the class—that is, the working class which is at present exploited and will continue to be exploited so long as wealth is produced as commodities—this class must take control of political power. This is the power which at the moment makes it perfectly legal for the capitalist class to appropriate the surplus-value produced by the combined efforts of the working class. It must be used now to convert the property relationship in the means of production from the present private or class ownership to one of common ownership: so that wealth—that is, useful things— may be produced because they are useful and necessary. And so society can go forward to its next goal, Socialism.
Robert Ambridge
Posted by Imposs1904 at 3:35 AM