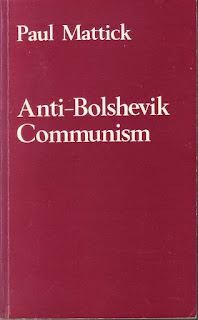 Book Review from the February 1979 issue of the Socialist Standard

This is a collection of articles written by Mattick over the past thirty or so years. Despite his sometimes convoluted style Mattick is always worth reading as on a number of important points his views are very close to ours (though on others, such as using parliament in the establishment of socialism, there arc fundamental differences). He did in fact write occasionally for the Western Socialist in the 1950s though none of these articles arc reproduced here.

Particularly good is his 1947 article on "Bolshevism and Stalinism" in which he shows how Lenin and Trotsky had laid the foundations for Stalin's dictatorship and that Trotsky’s basic complaint against Stalin was simply that it was Stalin rather than Trotsky who had succeeded Lenin. And we can only but agree with the view expressed in the Introduction that "the revolutions which succeeded, first of all, in Russia and China, were not proletarian revolutions in the Marxist sense leading to the ‘association of free and equal producers'. but state-capitalist revolutions, which were objectively unable to issue into socialism. Marxism served here as a mere ideology to justify the rise of modified capitalist systems, which were no longer determined by market competition but controlled by way of the authoritarian state".