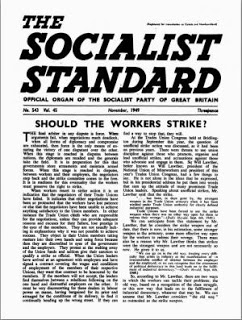 A hundred years ago, when capitalism seemed to be a divinely-ordained system, destined to last for ever, the “upper classes” made no bones about admitting that all the work was done by the “labouring classes.” The capitalist economists used to reflect on the happy arrangement of society by which landowners, shareholders and the rest were free from the painful necessity to work.

Here are three quotations made by Marx within the space of two pages of “Capital.” First, from Sismondi’s “De la Richesse Commerciale”: “Thanks to the advance of industry and science, every labourer can produce every day much more than his consumption requires. But at the same time, while his labour produces wealth, that wealth would, were he called on to consume it himself, make him less fit for labour.. . . Exertion to-day is separated from its recompense; it is not the same man that first works, and then reposes; but it is because the one works that the other rests. . . . The indefinite multiplication of the productive powers of labour can then only have for result the increase of luxury and enjoyment of the idle rich.”

Second, from Storch’s “Cours d’Economic Politique”: “The progress of social wealth begets this useful class of society . . . which performs the most wearisome, the vilest, the most disgusting functions, which takes, in a word, on its shoulders all that is disagreeable and servile in life, and procures thus for other classes leisure, serenity of mind and conventional dignity of character.”

And third, from Townsend’s “Dissertation on the Poor Laws": “It seems to be a law of nature that the poor should be to a certain degree improvident, that there may always be some to fulfil the most servile, the most sordid, and the most ignoble offices in the. community. The stock of human happiness is thereby much increased, whilst the more delicate are not only relieved from drudgery . . . but are left at liberty without interruption to pursue those callings which are suited to their various dispositions.”

But now, condition's are changing. As the upper class begins to realise that only lack of knowledge prevents the workers of the world putting an end to the present system, and with it the consumption of surplus value by a favoured few, so they begin to change their tune. One by one, like so many Uriah Heaps, they try to persuade the workers that they are all only humble working men. Brigadier Ralph Rayner, Conservative M.P. for Totnes, recently wrote to the Dartmouth Chronicle, detailing all the arduous duties he has to perform, in support of his claim to be a worker. The Sunday Express (31/7/49) announced that the Earl of Harewood’s fiancee is only “a working girl she met her future husband at a music festival, in the same way that any working-class girl might meet an earl at a music festival. But perhaps one of the most notable of recent claimants to working-class status is Sir Bernard Docker. Sir Bernard’s aspirations were revealed in an article in the Sunday Express (17/7/49) about Lady Docker, who not long ago had jewellery worth £50,000 stolen from her. One statement made by the author of this article is especially interesting: “When I met Lady Docker the jewellery she wore seemed insignificant to me—a small sapphire and diamond bracelet, two wedding rings, and an engagement ring fashioned from stones which once belonged to her husband’s mother. She said, ‘These and a Royal Thames Yacht Club badge in sapphires and diamonds are usually all I wear.’” Lady Docker confessed that she had “always been attracted by the solid man of achievement, not the playboy.” Lady Docker is to be congratulated on her taste in husbands. Her first was Mr. Clement Callingham, “a fine, hard-working business man,” one of whose presents to her was a diamond brooch valued at £7,000. Her second was Sir William Collins, who died in 1947, leaving nearly a million pounds. And her third is Sir Bernard Docker, who thinks that “every ordinary working man—and I class myself as a working man—wants to have the opportunity to save money and spend it how he likes.”

When Socialism is established, these eleventh-hour recruits to the working-class will have a chance of substantiating their claims.