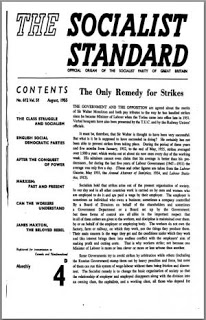 From the August 1955 issue of the Socialist Standard

We have been asked to give an interpretation of Clause 6 of our Declaration of Principles on the ground that a part of it has been taken to imply an authoritarian suppression of all opposition, actual or potential, including freedom of expression, by armed force—after the fashion of the Bolsheviks and Fascists.

This clause has already been gone into at length in our Pamphlet “The Socialist Party: Its Principals and Policy.” However, we will give a brief interpretation of it in relation to the point raised.

The State is the governmental power that makes and enforces the laws and regulations of society. Since it developed it has always represented the social class that is dominating. The armed forces of this State were organised for the purpose of defending the interests and the social arrangements that suited the dominating social class.

Every rising social class has had to struggle for control of, or influence in, this State power in order to abolish or modify the existing political arrangements that hindered the further development of the rising class.

In present society this holds true of the working class movement which seeks to overthrow the domination of the Capitalist class; a domination that keeps the working class in a subject position. The fact that most of the workers do not yet recognise the source of their subjection, or only vaguely do so, does not effect the question. Thus, before the workers can throw off this domination they must obtain control of the State power in order to take out of the hands of the dominating class the power that defends this domination.

Parliament is the centre of state power in modern “democracies” and the workers, who comprise the great majority of each nation, vote the representatives to these parliaments. Therefore, when the workers understand the source of their subject position and the action they must take to abolish it, they can do so by sending representatives to Parliament to take control of the State power for this purpose. By doing so they will take out of the hands of the Capitalist class the control of the powers of government, including the armed forces.

Once the workers have obtained control of the governmental power what then? They will proceed to reorganise society on a Socialist basis. Now we come into the region of conjecture. While we hold the view that the overwhelming mass of the people will participate, or fall in line with, the process of re-organisation (in other words that, while the workers will participate in the movement, and probably individual Capitalists, the Capitalists as a whole will realize that the game is up, as they have lost the power of effective resistance) we make allowance for a theoretically possible attempt in some form of violent sabotage during the revolutionary re-organisation. The control of the armed forces during this period will be an effective deterrent to any such violent attempt without these forces having necessarily to be used. Should a violent minority attempt to destroy Socialism they would have to be forcibly dealt with. While at full liberty to advocate a return to Capitalism, no violent minority could be allowed to obstruct the will of the majority. Hence the phrase in the 6th clause “in order that this machinery including these forces, may be converted from an instrument of oppression into the agent of emancipation.” There will be no suppression of speech, opinion, or peaceful organisation.
Executive Committee