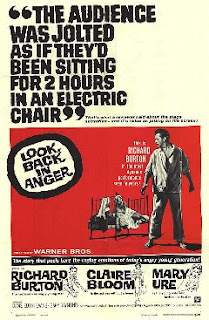 Film Review from the August 1959 issue of the Socialist Standard

Since the War a type of young man has appeared on the social scene whom the Press have been pleased to call The Angry Young Man. They are disillusioned individuals, who, out of a posh education and great expectations, have developed certain resentments about the post-war world. We know that all kinds of people can become angry about all kinds of things. What makes these particular young men so special?

For one thing they are fortunate in having the background that has enabled them to vent their anger through the medium of books, plays, and films. By focussing considerable attention on aspects of society they dislike, they have gained the admiration of some who see their own dissatisfactions reflected, and the hostility of others who see them as ungrateful to the system that gave them the opportunity to do so. They are fortunate, too, for anger has proved to be a successful commercial proposition.

Disillusionment
It appears that they have been the victims of one of Capitalism's confidence tricks. Educated, often at Universities, during the period immediately after the war, they had high hopes for the future. They knew all about the bad old days of depression and unemployment, but with the war itself behind them, things were going to be different. For a Labour Government was in power and the foundation for the Welfare State well laid. And then there was the United Nations Organisation to look after the international situation; everything was shaping-up nicely. War, unemployment, hard times, class distinction, these were things of the past. At that time you even heard talk of a social revolution having taken place! Surely, with their liberal education and social consciences they would count for something in the “new society.”

Disillusionment came quickly. Labour was soon on the way out, the big powers were re-arming again, UNO turned out to be ineffective. The class system was still there and it all seemed very familiar. They looked in vain for the new society. In fact, an increasingly technological society hadn't much use for them. They looked back and wondered; what went wrong?

“Look Rack in Anger"
The play Look Back in Anger by John Osborne was first performed on the stage in 1956 and is now a film. Its main character, the embittered Jimmy Porter, has reacted by resorting to a sweet-stall in a local market place for his living. The tone of the film is set by his frequent attacks on the snobbery, selfishness, and hypocrisy of “middle class” values, He is married to the daughter of a retired Indian Army Officer and this gives him ample opportunity to do so. The author presents the victim here as an individual thwarted by the values of a class-ridden society.

And where do we go from there? This film doesn't go anywhere. This is the blind alley that teems with rebels with no causes, disenchanted political reformers, and left-wing intellectuals. All this anger may be a change from the all-too-prevalent general apathy, but it should not blind anyone to the failure to offer a logical criticism of present society, or to even imply that any other is possible. Whether or not this is the job of a playwright, films and plays like this are seen by millions of people, and if discontent about the shortcomings of society can be canalised into anger that leads to nowhere, it is ineffective. The work then appears as a series of eloquent pot-shots, But merely to decry them will not make targets disappear.

Socialists are concerned with people, but we realise that to achieve a truly humanitarian society, its most important function—the production and distribution of wealth—must be put on a social basis. Of course Capitalism is ridden with anti-social ideas, but those who think that you can have a system based upon exploitation for private gain without them—and these idealists believe just that—will have to think again.

This principal motive of the system contaminates everything it touches— which is most things. The attitudes and actions of people reflect the social system under which they live: human behaviour is determined by social conditions. Look after the system and the values will look after themselves.

Reason for Anger
That is why we are concerned with a new society. Only thereby can worthwhile human relationships arise. The irony of the position of the Angry Young Men is that they subscribe to the very system whose essential institutions give rise to the attitudes they dislike. They will look everywhere for the causes of social problems except the place that really matters.

But what will happen to the young rebels? In the play—this and other observations were eliminated from the film—the religious attitude is described as having “. . . moved into a cosy little cottage of the soul, cut right off from the ugly problems of the twentieth century altogether.” It is worth remembering that the “angries” of one generation have a habit of becoming the cynical and detached of the next. They usually look back wistfully, “I was a bit of a rebel in my youth, you know.”