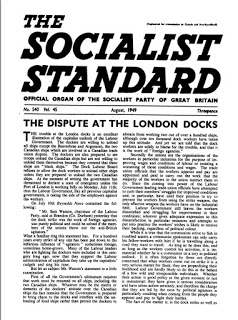 From the August 1949 issue of the Socialist Standard

Preparations for next year’s general election are under way. Unless some unforeseen incident precipitates the event, it can be expected before or during next summer. The two main protagonists, the Labour Party and the Conservative Party, have been having some preliminary slaps at one another for a few months past. The Labour Party tells us that it is planning for the future and is going to contest the election on the programme contained in its pamphlet, “Labour Believes in Britain.” The Conservatives have plastered the hoardings with posters telling us that with wise “national housekeeping” they will reduce the cost of living and that Nationalisation has cost “Us" £75,000,000, a drain on “OUR” income that they will stop. They have also completed their series of “Charters,” which will, no doubt, form their main election platform. Both parties are now adepts in the game of vote catching, although they will find it an increasingly difficult proposition in the future.

For members of the Socialist Party of Great Britain this forthcoming election has especial interest. We have, in previous elections, put one candidate in the field, but at the next election we shall contest two constituencies, Paddington North and East Ham South. That may not seem to be a matter for enthusiasm to some of our readers, but it is to us, and particularly to those of us who reside in the constituencies selected.

When we enter an arena with our candidate, it is not just a matter of another party muscling in on the time honoured game of fooling the workers. We do not treat the business as a sport, wishing our opponents good luck and congratulating the one who succeeds in collecting the most votes and a £1,000 a year job. We do not indulge in hypocritical handshaking with our opponents or in the “good-luck-old-man, the-best-man-has-won” bunkum. We are in deadly earnest. Our opponents represent our class enemies and there can be no truce in the class struggle. We do not even canvass votes as do our opponents. In fact we urge workers to refrain from voting for us unless they understand our object and are prepared to work with us for its achievement. An election campaign, for us, is a means of propagating our ideas amongst the workers at a time when political interest is rife and it is a means of gauging the development of Socialist ideas in the constituency contested. Further to that, of course, is the fact that, in contesting every possible election we are working towards the achievement of our object. Election campaigns that are successful in bringing more and more workers to an understanding and a desire for Socialism are preparing the ground for an increasing number of campaigns in the future.

It is not our object to look too far ahead at the moment. We are not focussing our attention beyond the forthcoming general election and our two campaigns. We arc getting ready. Our election agents are appointed and our candidates selected. Most of the work that is to be done at the moment will be done by our Parliamentary Committee and appointed members from the Paddington and West Ham branches. As the election date becomes nearer there will be loads of work for every comrade and sympathiser who has an hour or two to spare. The main task of the moment is to find the funds to pay the preliminary expenses. We must find suitable campaign premises in the constituencies NOW. We must consider and prepare certain printing matter NOW. We must have the necessary deposit NOW. Especially as the election date may be sprung on us earlier than we anticipate. We have estimated that the two contests will cost us about £900 and we need to get our hands on the major portion of that sum, right NOW.

The issue, whether we contest these two constituencies or not, does not depend on the amount of donations that we receive, but the success that attends our efforts most certainly does. Those readers of the Socialist Standard, whether they be members, sympathisers or just mildly interested, who want to help in the struggle to achieve Socialism should do so without delay. Those who would like to do a job of some sort, but have not the time or opportunity, can render us most timely assistance if they send along a few shillings. Our coffers are shallow, our need is deep.

In the struggle for Socialism we are emerging from the pioneer phase. Days of enthusiasm are ahead. Join with us in the only war worth fighting, in the only struggle worthy of working class effort, the struggle to end the system that deprives the workers of the fruits of their labour, the struggle so that poverty may give place to comfort, privilege to equality, and slavery to freedom. Don’t wait until the election date is announced and then roll up your sleeves and stride in to help. Roll up your sleeves and help by all means, but do not leave it too late, or the necessary preliminary work may not have been done through lack of funds. Even if it means going without a pint or packet of fags, dip into your packet and send a donation NOW. Emphasis on the NOW. Nothing you send will be too little and certainly nothing you can send will be too much. Cross your postal orders and make them payable to the S.P.G.B., then address your letter to E. Lake, S.P.G.B., Rugby Chambers, 2 Rugby Street, London, W. C. 1. And don't forget. DO IT NOW.