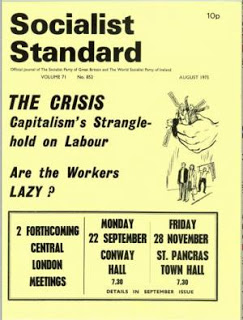 From the August 1975 issue of the Socialist Standard

For some unexplained reason we are constantly being told that capitalism is so different from previous societies that it is not subject to the law of social growth which governed the development and decay of these previous societies. The point is, can capitalism make history stand still and do its bidding? Can it, in effect, ensure that it will continue to exist simply by the power of property which most men worship but very few enjoy? Presumably, if capitalism can make its own historical rules there could be no prospect of its abolition.

Looking at the evidence around us, the working class show no signs of challenging capitalism’s rule. There is plenty of social discontent, but this is largely concerned with social reforms or Trade Union issues, and cannot be regarded as revolutionary activity. What are we left with? First, a solidly entrenched social system, second, an apparently disinterested working class, and third, a relatively small revolutionary party. Little wonder we are dubbed as dreamers, Utopian preachers and sectarian cranks by our opponents. Yet we persist. An organization which takes on the task of making workers Socialists in face of tremendous difficulties is considered to be either unrealistic or motivated by spiritual rather than material influences. We are neither.

We do not accept the permanence of capitalism any more than we accept the fact that the workers’ ideas of society cannot be changed. History shows that social systems change, and that these changes are accomplished by thinking men, and that mens’ ideas change with them. This includes ideas on all subjects — religion, politics, morality, science, law and art. Ideas have changed considerably over the centuries and dramatically in the last 100 years. The spread of opinion, or social consciousness, as with man’s social life generally, develops in accordance with the development of his productive forces. Today, the artificial organs of man, his greater control over nature, play a decisive role in his social existence. These artificial organs are not individual but social in character.

If social man’s intellect, his opinions and culture, are dominated by the circumstances of his economic conditions, at what point can we expect a change in men’s ideas which will result in a political decision to establish Socialism? The body of opinion today, or the prevailing ideology, is overwhelmingly capitalist, because capitalist ideas are socially sponsored, propagated and broadcast at all levels. Socialist ideas, which arise from the same economic conditions, are ignored or misrepresented as State capitalist, or distorted in other ways. Yet the battle of ideas can be fought against such overwhelming odds. In the first instance, we are not merely dealing with men’s opinions but the social factors which give rise to those opinions. The old French materialists were nearly right when they said opinion governs the world. We know that throughout the ages men’s ideas of politics in particular have changed. For example, the political domination by the Catholic Church as in Feudal society is no longer feasible or tolerated, yet the Catholic Church was the political centre of Feudalism for over a thousand years. Further back in early society it was moral to have incestuous sexual relationships, group marriages, infanticide and cannibalism. These were the product of well defined social conditions. The absence of these today has nothing to do with moral enlightenment or higher idealistic standards, but to the changed social conditions. Capitalism produces its own sophisticated form of barbaric cruelty and inhumanity on a far greater scale than these seemingly outrageous practices of yesteryear.

Idealists, and this includes religionists, moralists, humanists, etc., constantly refer to the innate goodness of man, and what the world ought to be — the world of the true and just. This conception of the world as it ought to be bears no relation or connection with the world as it is, but also with the historical development which has occurred. The idealists’ conception of history, which claims men’s development to be purely intellectual, based on some timeless ethical cause, is the happy hunting ground for the ostensibly reasonable apologists of capitalism — reason will solve everything, they claim. Pure reason, like abstract truth, does not exist. Every thought process must be related to social man’s material needs. This is what society is all about, the organization of a system of production to meet men’s material needs. The question which obviously arises is does capitalism satisfy or can it be made to satisfy men’s needs? The answer is obviously — no. The contradictions within the system of poverty in the midst of plenty, its dependance on the market economy, its unpredictability and general anarchy, disqualify it as a social system rendering social service in the real sense of the term.

The capitalists’ monopoly of propaganda undoubtedly influences the millions of workers who give their support to it generally. But the performance never matches the promise. You cannot indefinitely persuade people that the temperature at the North Pole is 80° Fah. The greatest ally of the Socialist is the temperature of the economic conditions. We apply our materialism, our factual analysis, continually to the economic background. Socialist propaganda is not aimed at man’s ‘innate goodness’ or higher nature, but at man’s practical material needs. It will be this factor alone which seen as an alternative will create revolutionary consciousness, and the subsequent political action based on that consciousness.

Opponents of Socialism can be divided into two main groups. One, the out-and-out supporters of capitalism, and the other the false friends of Socialism; Labour, Communist, I.S. etc. — supporters of State capitalism. Of the two groups, the latter, these knights of confusion, are the most pernicious, rendering lip-service to Socialism they attack our case on the ground that workers want something now — not Socialism, which according to them the workers will never understand anyhow. Incidentally, the workers have got neither. Mr. Clive Jenkins, Mr. Jack Jones, Mr. Hugh Scanlon, Mr. Len Murray, and all the other “Lairds of Cockpen” are steeped in capitalist mythology. They really believe it can be made to work. To listen to the nauseating ignorance coming from these people on the subject of Socialism makes us wonder what has happened to elementary working class education, even at Socialist Sunday school level. Then we have the ‘instant men’, the featherbrains of IS, IMG, Trotskyists, who want to grow an oak tree in a plant pot in seven days. These groups always want something for themselves, and want it now, and to Hell with the future. These phoney militants are not equipped to carry on the class struggle for Socialism. For a start, they have no staying power, little knowledge of political economy, and no principles whatever. They can only be described as the Fifth column of the Labour Party.

Most of the people who tell the SPGB the workers cannot understand Socialism do not understand it themselves. Socialism cannot be established without working class's understanding, and this we accept. There is no alternative other than to work for that mass understanding. Workers are not fools. If a proposition is presented to them in a reasonable way they will consider it. At the moment information about Socialism is rare in most working class circles because of the present size and influence of the Socialist Party. There is a vast difference in having a splendid case to propagate and the opportunity to get yourself heard. This is the real reason why the workers do not understand Socialism. It is purely a technical problem of communication and not, as our critics would claim, a flaw in our case. The responsibility for the extension of Socialist propaganda is the workers at large. The speed in acceptance of Socialist ideas by the working class depends on that. There are no innate principles in men’s existence. Man, with all his views and feelings, is what nature and society has made him. The establishment of Socialism is a task well within the capacity of the modern working class. The alternative is to watch civilization degenerate and deteriorate under an obsolete social system.
Jim D'Arcy
Posted by Imposs1904 at 10:07 AM