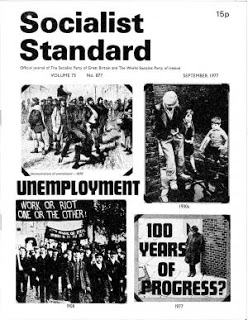 From the September 1977 issue of the Socialist Standard

Many people seem to think that strikes and similar disturbances are caused by laziness, intransigence, stupidity, a willingness to be led, greed, resentment, a want of foresight—in short, for moral failings on the part of employers and their employees, chiefly the latter.

This is odd—because all sorts of people have been involved under different circumstances and at different times—miners, civil servants, policemen, bank clerks, doctors, school teachers, shop assistants. Have they all suffered from lack of fibre? It is even more odd that the pattern does not change, repeated again and again since the early days of capitalism, and well recorded. Recently Elizabeth Gaskell’s North and South has been reprinted (Penguin 1976). Much of the central part of this book is concerned with the strike in a northern manufacturing town in the mid-1850s. Although it is not the main theme of the novel, and though Mrs. Gaskell was sympathetic to the workers both in her narrative and in real life, religious and individual issues were more important to her—as they usually were in nineteenth-century novels. Her account, though fictional, is clearly based on her own experience and closely observed.

She describes the—by now—familiar features — workers goaded to strike, the struggle to maintain a standard of living, union leaders trying to keep the issues clear and to hold the reins, some strikers —against their union’s advice — trying to force the issue by direct confrontation, collision with the police, broken heads, the threat of prison, attempts to make the closure total, employment of foreign labour (in this case, Irish).

When scientists find in circumstances which are varying a constant pattern they assume an underlying cause. In this case we do not have to carry out research to discover what it is. Discord is at the base of capitalism. A worker will try to sell his labour-power for the best price and in the best possible market. His standard of living depends on it, and with his standards his way of life itself. He cannot live out of society. There are always blandishments to induce him to spend his money—even, in fact to owe it. The capitalist, on the other hand, his employer, seeks to buy labour-power as cheaply as possible—profits depend on it. These are the seeds of struggle. There is bound to be contention. When it leads to strikes or other conflict then—since capitalism hasn’t changed—they are likely to run to type. It has nothing to do with moral dereliction. It has everything to do with the economic and unavoidable nature of capitalism.