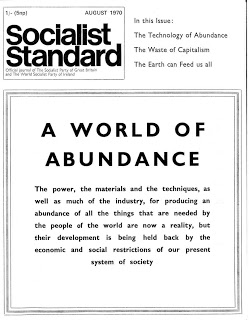 From the August 1970 issue of the Socialist Standard

A majority of those who comment on the future prospects for mankind stress the problems associated with rapid population growth. With unrelieved gloom book follows book upon the prospects of a starving world as a consequence of the rising birth rate and the only solution usually offered is birth control.

The theory that the restriction of population is the only cure to present-day hunger and future outright starvation goes back to a book by Thomas Malthus first published in 1789. His theory can be stated fairly simply; there are too many people on the earth and they are increasing too fast. Enough is not provided by nature for them all, therefore, poverty, vices, misery, the splitting of society into haves and have-nots leading to violence and wars. Most of these calamities could be avoided by stopping the growth of population. Malthus recommended the workers to practise birth control in order to remedy the social evils which they faced.

What was new in his theories was that he explained social problems like unemployment and poverty not from economics as was the case with Ricardo, Adam Smith and many of their followers, but from biology — from sexual life. The basic idea convinced many when it was first put before the public and it seems to be convincing to a substantial number of people today.

Malthus claimed that population grows faster than the production of food (not to mention clothing and shelter). According to him population grows in geometric progression (1, 2, 4, 8, 16, 32, 64 . . .), while the production of food increases only in arithmetic series (1, 2, 3, 4, 5, 6, 7 . . .). He was convinced that the only way to restore the balance between population growth and the production of food was through moral restraint (sexual abstinence i.e. copulation control through postponement or cancellation of marriage), limitation of births, pestilence and war. Because the world is always overpopulated there is inevitable poverty and misery. From this Malthus drew the conclusion that practical steps have to be taken to decrease the surplus population.

During the second half of the nineteenth century and the beginning of the twentieth century Malthus’s theories were not widely accepted but what is seen as the menace of overpopulation in the so-called underdeveloped parts of the world has given birth to a whole new generation of neo-Malthusians who are determined to save the world through producing infertility in bedrooms rather than fertility in fields.

In most of the books and articles produced by the modern neo-Malthusians the basic ideas of Malthus remain unchanged. Biological solutions are suggested for social problems, biological laws explain social facts and biological causes replace economic, social and political ones. People starve because they breed too rapidly not because the world’s wealth is monopolised and used by a minority to increase this wealth still further in response to uncontrolled economic forces. People will stop starving when they stop breeding and not when they reorganise the world’s resources in the interest of the world’s population.

The fact is that Malthus and his followers are not concerned with explaining poverty and misery, they are concerned with justifying it. They see scarcity as something natural and eternal to which we must adjust. In the face of their critique technology must retreat from the fields and the factories and into the bedroom.

But the point they seem to miss is that surplus population is not something natural and absolute. It is at all times relative to production, distribution and social organisation. There are definite socio-economic reasons why there was a “surplus” population in the Rhondda in 1931 and in Delhi in 1961. They were only relatively surplus and superfluous because they have been made so by the way the world’s population is organised (or disorganised) in relation to the means of production and world markets. Workers do not suffer the pangs of hunger and destitution because there are too many of them but because they cannot gain access to the things which would enable them to produce what they need. Poverty is not the result of overpopulation, on the contrary, overpopulation is the result of poverty. This is true in two senses: (i) poverty in the sense of propertylessness which afflicts all workers generally and which can lead to relative overpopulation when this propertylessness leads to workers being cut off from the means of production during periods of unemployment and (ii) poverty in the sense of destitution which can lead to apathy over questions of family limitation, which, in turn, can lead to an increasing birth-rate. This is partly the reason for the lack of success of birth control in areas like India. Modern methods of birth control require a degree of self discipline which is often absent in populations with predominantly pre-industrial ideas and values, especially when they are thrown together in squalid primitive shanty towns with little hope for the future. Contraception is difficult enough on an individual level in such conditions but when it is attempted on a mass scale, as in some areas of India, it becomes ludicrous.

When we look at the problem on a world scale it becomes apparent that it is not merely a question of people failing to gain access to what is produced but also what is produced cannot find its way to those that need them. Because the world is organised along national and class lines the means of subsistence are sometimes withheld from those who most urgently need them.

The cornerstone of the Malthusian argument is that the produce of the soil can never keep up with the increase in population. It is based on an extremely simple model of soil and population. It disregards entirely a third factor—the human ability to use rational means to attain certain ends i.e. science and technology. The history of Western Europe and America over the last 150 years has contradicted Malthus on every point. Despite the fact that wealth was and is owned by a minority the standard of living of Europeans has improved even though the population increased from around 180,000,000 in 1800 to around 676,000,000 in 1965. It could be argued, of course, that this was achieved at the expense of the rest of the world. But this cannot be the case since the per/capita income of the entire world has been growing over this period and not only that of the advanced industrial countries. At the present time the indications are that, viewing the world as a whole, food production is more than keeping pace with population. [1]

The trouble with Malthus and especially neo-Malthusians is that they take the social system as something given and unalterable. The only thing that can be changed to solve problems of poverty is individual sexual behaviour. We must regard the fact that the world spends more on armaments than the entire national incomes of Southeast Asia (including India and Pakistan), the Middle East and Latin America [2] as something given and somehow ‘natural’. But we must regard an Indian couple with six or seven children as something unnatural and horrible. Heavily armed with sheaths, coils and pills they set out to change the latter condition but the former condition must be left well alone.