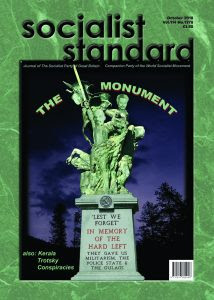 From the October 2018 issue of the Socialist Standard

Politics
A month or so on from the horrific floods and consequent devastation in the state of Kerala, south western India, it is interesting to look back at the commentary being put out by Indian writers at the time. There is blaming and shaming of different varieties, of different parties, with different emphasis depending on the main points raised by each individual commentator. This particular incident though, however serious and shocking, cannot be isolated from the many other such weather catastrophes occurring globally with greater frequency. One has to wonder just how seriously unaffected individuals view such disasters and how long the incidents remain in their minds. Are such disasters even perceived as something that any individual can do anything to change? Political commentary in one country relating to events in that country can have only limited effects. When talking of climate catastrophe the political discourse must be global. The necessary action must be global. All events need to be seen, not separately, but as parts of the whole.

Differences in emphasis between the government of the State of India supporters, (the nationalist BJP,) and those of Kerala State government supporters, (so-called Communist ie allegedly ‘Marxist’) was, as to be expected, widely different and the blame game could be clearly seen as political. For instance the local state government called very early on to the central government for assistance with troops, equipment, vehicles, helicopters, etc., but were dismissed for ten days before the floods were recognised nationally as ‘a severe calamity’, at which time limited help was given, gaining praise from BJP supporters and derision from local government backers. Central government also refused offers of assistance and donations from outside the country whilst within Kerala State itself local organisations quickly rallied thousands of volunteers from among their ranks of students, youth, trade unions, etc., both members and supporters, with volunteers in control rooms at fourteen district administration headquarters, while 12 thousands of fishermen with more than 600 boats evacuated the bulk of those rescued. It should be noted that the BJP has scant political representation in the whole of south India, so stands on the sidelines in Kerala.

South India has approximately 20 percent of India’s population and contributes about 30 percent of total taxes. Its share in total GDP is 25 percent but receives only 18 percent in return. Kerala State, a part of S India, is recognised by international organisations as having the best human development indicators in India.

Monsoon, Water, Statistics
In recent years the monsoon season has become more and more unpredictable resulting in years of drought and crop failure followed by sudden inundation causing loss of top soil and consequent problems. This most recent flood happened during the expected monsoon season but was much greater than the previous ‘biggie’ a century earlier. Hundreds of thousands of people were evacuated safely from below many of the dams in the few days before the flood happened.

According to the publication Nature, ‘there has been a 3-fold increase in widespread extreme rain events over central India during 1950-2015, increasing the events of flooding which is linked to rapid surface warming on the northern Arabian Sea which borders Pakistan and NW India.’ The former advisor and founder of the Climate Change Research International says that expected increases in extreme weather events due to climate change reveal India to be more vulnerable (than many other countries) because of its wide geographical and demographic variations.

Expert after expert confirms on a regular basis that what is happening globally, that is increasing extreme weather events, is not a surprise but just what was expected and warned about.

In 2016 Kerala suffered its worst drought in 115 years requiring severe water rationing. This was soon followed in 2017 by 440 wild fires that destroyed 2,100 hectares of forest. Then came the 2018 flooding when 80 dams in the state had to be opened (of which 42 are major dams) causing 44 rivers to overflow. Kerala’s annual average rainfall, the highest among all ‘big’ Indian states, is close to 3,000mm  – more than double that of the UK, and most of it will fall during the three months of the monsoon season. This year, from June 1 to August 21, 41 percent more than normal rain fell, and in the latter 19 days, 164 percent more than normal, causing massive flooding and landslips affecting all districts of the state. Including the huge numbers of evacuees, current figures state that some 5.4 million people have been directly affected.

India’s population is 15 percent of the global total with just 4 percent of global water resources.

65 percent of farm land depends entirely on rain. A comparison is revealing:


Regarding the water table, information taken from a European Commission report reveals that currently there are more than 20 million boreholes, up from tens of thousands in the 1960s. The water table is falling on average by 0.3m – 4m annually meaning that wells dug in the ’60s to a depth of 15m are now having to go to a depth of 91m to find water. In some areas wells at depths of 500m have gone dry.

It’s All About Politics
To return to the political agenda, and being aware of the dire water situation, currently the national government is now encouraging the growing of sugar cane, rice and other ‘water heavy’ crops in areas of traditionally low rainfall, dancing to the tune of multinational corporations eager to gain access to more farmland. In 40 years Kerala has lost nearly half its natural forest, some to monocrops and some as urban areas continue to expand. Both of these factors cause problems for sudden flows of water, less being absorbed naturally and thus causing rivers to overflow. ‘How quickly rivers change and how quickly we respond with urban drainage and flood mitigation measures will play a significant role in our evolving flood risk. Further to this will be how rapidly societies and their governments begin to adopt more resilient ways of living with water.’ (LINK).

The biggest handicap to implementing any of the above measures is the current global political system’s lack of interest.

Take for instance the current tense situation between the neighbouring states of Kerala and Tamil Nadu. The struggle is between dam safety (Kerala) and water availability (Tamil Nadu). This one particular dam and all its catchment area is in Kerala but operated by Tamil Nadu through a very interesting colonial history. The dam, 123 years old, diverts some of the water east into Tamil Nadu’s Vaigai river – dating from an 1886 agreement between the British Madras Presidency and the Kingdom of Travancore. Why is this relevant now? Because the case had to be referred to the Supreme Court for judgement to have the level reduced 3 feet against Tamil Nadu’s wishes.

As of 2 September 483 deaths have been recorded as a result of this latest flooding in Kerala; more than 1.5 million people are in relief camps; thousands of homes have been either inundated or swept away and roads and a major airport have been seriously damaged. According to ecologist Dr S. Faizi:

‘This was a man-made calamity predicted by the Intergovernmental Panel on Climate Change in 2007.’ The calamity was fewer rainy days but a greater volume of precipitation. The IPCC prediction was that 100-year flood cycles will change to 4-5 year cycles – and soon. The victims of this particular climate catastrophe are amongst the smallest emitters of greenhouse gases globally.

Kerala in context: just one small snapshot from a huge collection of global disaster scenarios caused by a world political system forging ahead to achieve its main objective – profit – whatever the consequences.
Janet Surman
Posted by Imposs1904 at 11:37 PM