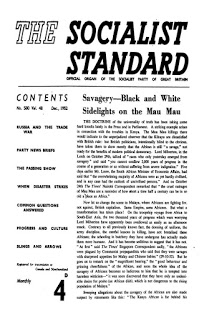 Vote for Tallulah
Mr. Joseph Harsch, writing in an American paper during the election campaign, said that "the object in politics is the attraction of the maximum number of potential voters from the opponent's camp." This is saying what Socialists have often said about the big political parties' approach to politics. The Americans seem to be franker about the whole business. If one spoke of the rival shows put on by the opposing parties, one would in Britain be speaking metaphorically; but in America, the phrase becomes literally exact. The Democrats and the Republicans both put on shows on the stage and on television in order to appeal to the taste for entertainment of the public—no doubt because there isn't sufficient difference in the programmes of the two parties for them to be able to appeal to the voters' reason. Governor Stevenson was fortunate enough to get Messrs. Rodgers and Hammerstein to organise a show for him, including such eminent political figures as Miss Tallulah Bankhead and Miss Lauren Bacall.


Climbing on the Bandwaggon
Now that the American public, after having duly considered the inducements offered them, have decided that General Eisenhower is the man to run American Capitalism for the next four years, the other Western allies have been falling over themselves to ingratiate themselves with him. Mr. Churchill wired that he was looking forward to "a renewal of our comradeship and of our work together for the same causes of peace and freedom as in the past." Mr. Menzies, the Australian Prime Minister, sent a message that he was confident "that under your leadership the splendid friendship and co-operation which exists between our respective nations will be maintained and strengthened." No doubt it will—but it will be the co-operation of the sergeant and the recruit. The sergeant gives the order and the recruit co-operates by carrying it out. And it is too bad for the recruit if his interests happen to clash with those of the sergeant. Mr. Churchill put the position with rare and surprising frankness when he said at the Alamein Reunion last October 24th, referring to General Ridgway, that "as far as Britain is concerned, we stand under his orders and at his right hand."


One up for Mr. Gulbenkian
If you read in the “Politics” that Aristotle approved of private property because, among other things, it allowed the exercise of the virtue of generosity, you might heave a sigh of relief and think “At least nobody uses that excuse any longer." For it seems much like saying that it is a good thing for Jones to hit Smith over the head, because it allows him then to display his kindness of heart by picking his victim out of the gutter. One is glad to hear that Mr. Calouste Gulbenkian, the oil-king, has given a Velasquez to Lisbon Museum, but it seems hard that the thousands of oil-workers in Mr. Gulbenkian’s concerns should be exploited merely so that Mr. Gulbenkian can do himself a bit of good in the hereafter by such acts of generosity.


Very Suitable
But if you think that Aristotle was out of date, you would be wrong. For when on October 30th an M.P. asked the Minister of Health if he would "incorporate into the national medical scheme the cost of fully financing all cancer research in order to make this necessary work independent of public subscriptions," he got this reply from the Minister's Parliamentary Private Secretary, Miss Homsby-Smith: "No. Cancer research is a very, suitable field for private generosity which the Minister would not wish to discourage."

But why leave it there, Miss Smith? Why not make armaments buying, now done by the State, a field for "private generosity”?—so that those who wanted armaments could buy them. In this reply is summed up succinctly the capitalist order of priority. Anything which directly safeguards profits, such as arms to fight off foreign capitalist states, or subsidies and allowances which keep workers passive, and ward off strikes which destroy profits, is attended to by the State with its compulsory powers. Anything the influence of which on profits is too remote is left to “private generosity." This reply gives the lie once for all to the contention that our free or cheap doctoring is a "Health Service." It isn't; it is a Fit-for-Work Service. It is designed to keep the workers fit enough to produce and reproduce. If it were really a health service, there could be no object more suitable for its attention than research into a disease like cancer. But since the bearing of such research on the central cause of profits is not obvious to the present Government, it is cast out into the wintry wastes of private generosity, where, if those individuals with money to spare deign to hand any over, research will be done; otherwise it will be severely restricted.


The feminine touch
This incident should also be considered by those who maintain that "men" as such do most of the harm in the world, and that if more women were in Parliament and the Government society would somehow become more humane. This reply in Parliament was given by a woman; and a more brutal statement could not have been made by any man in her position. In politics the division is not between man and woman, but between those who want a Capitalist and those who want a Socialist society.