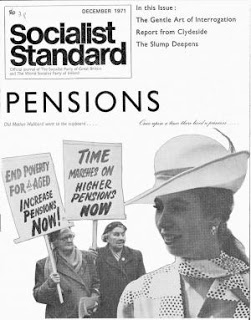 From the December 1971 issue of the Socialist Standard

Nobody knows how deep the present depression will go, how far it will spread and how long it will last, but there are plenty of ominous signs. At first, some two years ago, the British Press had its eyes on growing trade and unemployment difficulties in America, then it became apparent that conditions were rapidly worsening in Britain. Now we read reports of troubles in Japan and the countries in the Common Market. The Observer (7 November) under the heading “Fear and Depression hits Europe” reported:


Western Europe has been seized by recession jitters. The economics of the main industrial returns are still far from a crisis situation, but bankers and industrialists in France, West Germany and Italy are intensely alarmed by the outlook for 1972.

The government here tries to stimulate optimism by declaring that we are on the verge of big expansion, but, as the Times recalls in its issue of 5 November, the Chancellor of the Exchequer was making the same kind of hopeful forecast exactly a year earlier. This is the common pattern of all the recessions capitalism has ever had. Nixon’s government was also a case in point. First the promise that there would be no recession, then the denial that it had begun, then the late admission that it was a little one and would soon be over and finally the complete reversal of policy by his government in August last—a clear confession that the policy that was to have solved the problem had in fact not worked.

The First National City Bank of New York, in their monthly Economic Letter, were caught napping by this. They were so impressed by an article written by Paul W. McCracken, Chairman of the Council of Economic Advisers, in which he explained “clearly and persuasively” why the Nixon government would not adopt the Galbraith policy of imposing controls on prices and wages that they re-published the article in their August issue; only to find that by the time it was in print the Nixon government had imposed a 90 day freeze on prices and wages, to be followed by a policy of “guide lines”.

This policy of controls was reported to have been well received, apart from a certain amount of trade union mistrust, just as the Heath promise to curb price rises helped him to win the Election in June 1970.

Most people believe that things would be better and life would be easier if only prices were stabilised or reduced. This is a complete illusion, a failure to understand how capitalism works. To start with nobody actually wants all prices to be reduced: what they all want is that the prices of the things they buy should be reduced and the prices of the things they sell kept as they are or increased. This includes the workers, none of whom want to see a reduction of their wages —which also are prices, the prices at which they sell their mental and physical energies (their labour power) to the employers. The workers also want “full employment”.

Here they come up against the cruel truth about capitalism. The employers have paid off hundreds of thousands of workers because at present selling prices and costs of production (including wages) they cannot make a profit. If they saw the prospect of a profit they would re-engage them to-morrow. From the employers’ point of view the solution lies in raising their selling prices, or reducing costs, including wages, or cutting their total costs by getting the same amount of work out of fewer workers. All of this is subject to the overriding condition that the goods produced can be sold, and at the present time world markets are shrinking and competitors abroad are also trying to cut their costs.

Though it had not attracted much general attention some prices have been falling, notably the metals copper, aluminium, antimony, silver. The price of copper has fallen from about £700 a ton early in 1970 to about £400—due to overproduction. It is being met by agreement to curtail production, with a consequent increase in unemployment. If the depression deepens and extends generally to other countries all prices could be stabilised or actually fall. Capitalism is behaving normally, going through its phases of expansion, boom, crisis and stagnation just as Marx depicted it a century ago. What has obscured the effect of these phases is that governments have superimposed on the normal workings of capitalism a steady depreciation of money itself.

This has led monetary economists such as Milton Friedman to offer as a remedy a curtailment of the increase of the money supply and a consequent restriction on the general rise of prices. It would not solve the problem of capitalism’s alternating expansion and contraction. Capitalism works like this at any price level, high or low. In the years 1920-1924 prices fell by a third and wages by rather more, with unemployment reaching peaks of over 2½ million in 1921 and 1933 and never falling below a million.

Would any of the various forms of controls of prices and wages avoid depressions? The answer is that every possible variety has been tried and failed. What is happening now is that the governments are shopping around, as is Nixon’s trying the cast-off methods which have been used elsewhere. All the short lived “miracle” countries are in the same situation. No longer do we hear about the Japanese miracle, the French miracle, the German miracle and so on.

The latest to start moving into depression is Sweden, just when John Davies, Secretary for Trade and Industry gave an interview in the Director (November) saying that he rather liked the Swedish version of incomes policy even though it wouldn’t be practicable in this country at present.

In this country some form of incomes policy has been tried half a dozen times by Labour and Tory governments since the war and all have failed and been abandoned.

The last was the Labour government’s imposition of a “standstill” for six months in 1966, followed by six months “severe restraint”. (This policy was imposed only four months after the General Election of March 1966 without any mention in the Labour Election Manifesto that it was intended). It completely failed to prevent prices and unemployment rising, and the Heath government have been even less successful.

It may be hard to accept but is nevertheless true that there are no ways, with or without an ‘incomes’ policy, to prevent capitalism from behaving in accordance with its own economic laws.
Edgar Hardcastle
Posted by Imposs1904 at 9:15 AM