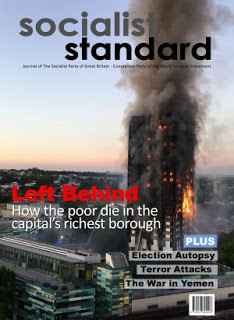 From the July 2017 issue of the Socialist Standard


Capture parliaments by electing majority socialist MPs (actually Socialist delegates) mandated to pronounce: Annulment of all property and territorial rights whereby all that is on and in the Earth becomes the common heritage of the whole humanity.


World socialism can be established only in a peaceful and democratic way, by means of collective understanding, numbers and organization of the working class. However, if any minority group obstructs initiation of socialism, socialists will be entitled to use force to counter it. But force does not necessarily mean violence. Working class force, or power, is born out of the union of knowledge based on the materialist conception of history and an independent organization of the working class. It is numbers, understanding and solidarity that constitute its real force. The working class is the majority – 95 percent of the population. It is only the working class who perform all work in capitalism. Therefore its power is not violent.

Winning elections does not weaken the argument for using this power, applying force, in the event of obstruction; rather it strengthens it. On the other hand,  applying force against an elected government, without taking the first step of declaring the legal defeat of capitalism through its own constitution, is not only futile, but also undermines the fact that it is the class-conscious working class that is the majority.

To win the battle of democracy, after understanding what we are going to do, where the danger lies, what and why socialism, has a double advantage: (a) we can show that there is a majority for socialism by sending a majority of delegates (not merely representatives) to the parliament, and (b) in case there be any attempt from any corner to block this mandate, the socialist majority has the legitimacy to use other means. This tactic of social change via democratic means is free from violence and certain.

Arriving at the majority and, with it, instead of reforming capitalism and running its administration socialists will get set about its abolition; they will not accept any administrative posts of capitalist society before arriving at the position of its abolition. The task of socialist delegates is not to help run the capitalist governing process, but to incapacitate the process itself, to facilitate the abolition of capitalism by the immense majority of socialists. Because, socialists neither support nor oppose the reforms of capitalism. Their only and immediate aim is to establish socialism.

Without informed majority participation in order to reach at a democratic decision in the interest of all the conception of vote and democracy is meaningless. We need participatory democracy.

Socialists do not place any trust political leaders, since the existence of leaders means the existence of followers and both remaining drowned in political ignorance. Leader/follower relation is anti-democratic. Organization and leadership are not the same thing; there can be organization without leadership. Leadership is not necessary when an organization is democratic. The immense majority of people of society can create socialism consciously in their own interest and with their own initiative.

A socialist party does not require a leader, socialists are all equals.

In Marxian conception ‘socialism’ and ‘communism’ are synonymous. Marx and Engels  used the two terms alternatively to mean the same thing –  post-revolutionary participatory democratic socialist administration of things – affairs of life – in lieu of the   capitalist administration of men. In Marx’s view the principle of communism or socialism is: From each according to their ability, to each according to their needs.