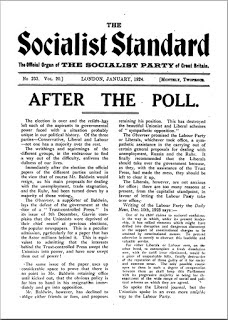 Another of our wise rulers has been giving us the benefit of his profound intellect ; speaking at Bradford, Sir Eric Geddes said (Daily News, 7/7/23) :


“Trade cycles are very undesirable . . . they are probably due to the natural and to some extent commendable tendency of sales departments to overestimate future demand.”

Which means of course, that trade cycles are due to—eh ! trade cycles. No doubt Eric, they are undesirable, for they interrupt the smooth working of the profit producing process, and play havoc among the smaller capitalists, but they are not the only undesirable things in a world of trade and profit. War, poverty, prostitution, and disease, are also noxious conditions generated in that world. But what happens that demand should suddenly cease? Have the masses a plentitude of the things they require? Let us see if there is an explanation. Lancashire produces cotton goods, and at one time had practically the monopoly of the world trade; for years her products represented more than a quarter of the total British exports. But other countries, including France, China and Japan, entered into competition, becoming to us lost customers and new competitors. Furthermore, we now export up-to-date textile machinery to these very countries. In 1913 the total exports of this class of machinery were valued at a little over eight million pounds. In 1922 they had risen to .£25,000,000 (quoted from News of the World, 23/9/23). What does this mean? It means relatively shrinking markets, with fiercer competition in those markets, not only for cotton goods, but for nearly every other industry, industries in which these countries now engage. An enormous quantity of products produced in an ever shortening period of time, which neither the unlimited luxury of our masters and their hangers-on can consume, nor the meagre wages of the workers buy; wages representing in value but a small part of the wealth they have produced—not for their use, but for sale or exchange to realise the capitalists' profit. Failure to effect this sale, which to-day comes between production and the use of wealth, brings about a stoppage in production, known as an industrial crisis, with its consequent anarchy and chaos. Only then, when they cannot sell their goods, and the crisis is upon them, do the manufacturers become aware of their overestimated demand. Under Socialism, with production for use, sale would be abolished, thus allowing the uninterrupted and full satisfaction of social needs through cooperative organisation, instead of our present chaotic scramble. It is a striking confirmation of the Socialist exposition of trade cycles, that the gradually increasing competition for markets, dating from the first crisis of 1825, has been accompanied by shortening periods of years between the recurring crises, until to-day, international competition, accompanied by monopoly and deliberately restricted output, has resulted in one prolonged depression, that after three years shows no signs of abatement. The fiercer the competition grows, the greater the need for sections of the capitalists to secure and retain markets. Hence the cause of modern war.


"There is surely a middle course between sanctioning monopoly and tolerating anarchy.”

Alas! a barren hope, for there is but one course, and it is for the workers to take it. It is to end capitalism, with its absurd contradiction, super abundance, and want, coexistent, and to establish a community of interests—Socialism.