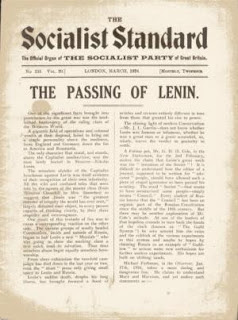 From the March 1924 issue of the Socialist Standard

In January, 1924, the Manchester Guardian quoted an Exchange Washington message as saying, “Following a Conference with oil owners, President Coolidge has ordered two battleships to proceed to Mexico.”

It has been stated that the United States of America came into the great war to fight for, besides other things, the rights of small nations. The knowledge obtained in the great war about such rights, as can be seen from the above telegram, has now been put to practical use by President Coolidge. That the U.S.A. President has consulted American owners of oil wells in Mexico, instead of representatives of the Mexican people, is probably not an oversight on the President’s part, A person so high up as the U.S.A. President, cannot be expected to consult a low down greaser as to what is good for him. Other messages from the same source as the above telegram, state:

“A squadron of the U.S.A. Navy has been sent to scare the rebels from blockading the oil port of Tampico,” and again, “ It is understood that American troops are destined for the Gulf and oilfields, where extensive foreign interests were recently invaded by Huertaists.”

That these foreign interests happen to coincide with the interests of the American Standard Oil Co. is probably a happy accident. One more phase in the struggle between the Standard Oil Co. of America and the. Royal Dutch Shell is being fought out in this struggle for the exploitation rights of the Mexican oil wells.

Further Exchange Washington messages state: “That the U.S.A. have allowed armaments to be sold to Gen. Obregon’s troops, and have placed an embargo on the supply of munitions to the enemy,” who is in this case Gen. de la Huerta. “Gen. Obregon’s troops have been allowed to march on American soil in order to outmanoeuvre the enemy.” The violation of American soil by foreign troops does not seem to Have scared America’s patriots. Patriotism and the large dividends which the American Standard Oil Co. have given to its investors, evidently in this case, go hand in hand. This, however, is in the U.S.A., where, as every Englishman knows, graft, big business and Government go together. In England there has been a change of Government. The late Tory Government persistently refused to recognise Soviet Russia. The first plank in the new Labour Government’s programme, and which they have already carried out, was the recognition of Soviet Russia. That Russia has possession of oilfields, which, if concessions could be obtained for their exploitation, would be the means of obtaining a monopoly in the future, as well as huge profits which follow; that Russia is a possible huge market for British textile goods; that Russia has an abundance of raw materials which could be manufactured in Great Britain is only incidental to the fact that though leading members of the present Government have denounced Soviet rule in the past, they have now condescended to shake hands with murder, as the Daily Mail once had it.

The Manchester Guardian, the organ of the British textile industrialists, has for months past advocated the full recognition of Russia. It advised the Liberal and Labour Parties to come together for this end. This has come about. Leslie Urquhart, Chairman of the Russian Asiatic Corporation, has, as was pointed out in the Leader, of our November issue, largely blamed the late Tory Government for his failure to obtain favourable concessions from Russia, for his Company. England has beaten other countries in the diplomatic recognition of Russia, in its haste to obtain first chance in the Russian market.

The prospect of a large market for British goods and the possibility of concessions to exploit the Russian workers and mineral wealth of Russia has been too much for the cupidity of the Capitalist class.

Can it be that big business does influence Government policy in England?

The scramble for markets is becoming ever keener. For the markets that now exist are becoming less able to swallow the gigantic output of modern industrial production. More, and more, countries are becoming competitors for the markets that at present exist. In the East, India and China are gradually becoming sufficiently industrialised to produce enough goods for their own needs. Japan, having a superabundance of goods, which it desires to get rid of has long since begun a policy of annexing suitable territories in which it can dump its goods. In the Chinese market Japan has come up against other countries on the same game, namely America and England. A consortium of powers had to be formed in order to prevent war, and if possible, to divide the spoils equally.


Force will soon be the only method by which these countries can dominate markets.

To use force means war; on the other hand, unless markets are found under the present system, it means greater unemployment and poverty for you English fellow worker. Out of the two evils which are you to choose? Choose neither of them, fellow worker; instead, study the principles of the Socialist Party on the back page. If you understand and approve of them join the Party and help us to eliminate war, unemployment and other evils which are the result of the Capitalist system in which we live.
H. A.
Posted by Imposs1904 at 3:38 PM

"A person so high up as the U.S.A. President, cannot be expected to consult a low down greaser as to what is good for him. "

I can see what they did there, but I'm not a fan.