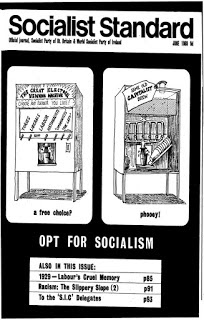 Editorial from the June 1969 issue of the Socialist Standard

May Day this year saw what the press claimed was "Britain’s largest and most sporadic political strike since 1926". The Communist Party congratulated "the hundreds of thousands of workers" who were downing tools and Socialist Worker (IS) was so confident that "this May Day’s political strike confirms a willingness to struggle" that they wanted it to "mark the start of the fight for workers’ power”. But the Revolutionary Socialist Students’ Federation didn’t think it was as simple as that; first we had to decide whether we were witnessing merely "a massive rise of Trade Union consciousness" or was there instead "some glimmer of systematic revolutionary politics emerging from the militancy”?

Reading this sort of comment you could have been forgiven for not noticing that, at a time when trade unions and the right to strike are being openly threatened by the Labour government, less than one per cent of the labour force was prepared to stop work for a single day. Even in those areas where a relatively high proportion of workers turned out (Sheffield, for example, with 10,000 or 4 per cent of the work force on strike) the marches and demonstrations were poorly attended. In Sheffield 500 men and women gathered at the City Hall to listen to Labour MP Norman Atkinson calling for different policies from the government; in Manchester perhaps a similar number marched to the Labour Party’s headquarters; in Hull (with 3,000 dockers out) about 20 made the effort to demonstrate.

The facts, then, argue quite plainly that—such is the lack of even trade union consciousness among the vast majority of workers—they will accept some form of Industrial Relations BiU. In fact, Labour and Tories both recognise anti-strike legislation as a vote winner with the working class and vie with each other in portraying strikers as bloody-minded wreckers intent on sabotaging industrial output.

No delusions
Faced with this situation socialists do not take refuge in the sort of romantic delusion which the Left comforts itself with (“. . . the working class begins to move decisively onto the political scene .. .’’ writes the May Day edition of the Newsletter (SLL)). Members of the Socialist Party of Great Britain in the industries involved were, of course, on strike on May Day. This is because, as workers ourselves, we support efforts by groups of working men and women to defend their wages and working conditions. We also support actions such as that taken by the employees at the Broadheath industrial estate near Manchester who passed a resolution at their May Day meeting calling on the AEF executive to conduct a ballot on the withdrawal of financial support from the Labour Party. Socialists have always refused to pay the political levy and have consistently advised other workers to do the same. And at our union branch meetings socialists put forward the sort of arguments which expose the government’s lies. So when Barbara Castle’s white paper In Place of Strife suggests that the class struggle can be eliminated from capitalism we show that the measures she proposes are futile. In America, for example, where the president can impose much longer ’cooling- off periods’ than Castle's 28 days, the average worker loses over four times as many days through strikes as in Britain; while in Australia, where strikes are virtually illegal, there are still many more stoppages per worker than in Britain.

But what distinguishes the Socialist Party from all other organisations is that our members constantly pose the socialist alternative to capitalism at their workplaces, at their trade union meetings, in bus queues—in fact, whenever and wherever we come in contact with other workers. We point out that far more than trade union activity or political reforms are needed to achieve a decent world; one without money or a wages system where the means of production will be owned by society and can therefore be used to satisfy people’s needs instead of being cramped by the dictates of the market.

Majority needed
Now the new call is for a work stoppage when the TUC meets on June 5. Groups like the Socialist Labour League are calling on the TUC at that meeting to organise a general strike in order to "halt Wilson". They write:

But our cowardly critics will ask — ‘would a general strike be successful?’
This is not the question (!). The task of revolutionary leadership is to provide the type of political leadership which is necessary in order to prepare the working class for what lies ahead. Since only a general strike would halt Wilson the task of all trade unionists and Marxists is to fight for it.

The Socialist Party of Great Britain argues that what is needed is not merely to "halt Wilson" but to "halt capitalism". This will not be achieved by any amount of loud-mouthed adventurism or super-revolutionary leadership. What is needed for such a social revolution is a majority of working men and women understanding what Socialism entails and determined to establish such a system. This understanding will grow (is growing) out of the collective experience of workers under capitalism —a process which socialists attempt to encourage by their propaganda activities. So even while socialists are engaged in the struggle over wages and working conditions, they never cease putting forward Socialism as an immediate demand. Far from standing back from the day-to-day struggles of the working class, socialists are involved in these efforts —and complement them with a socialist perspective. On the other hand, it is the Left which opts out of the basic task confronting the working class —by failing ever to put forward socialist ideas. We opt for Socialism.