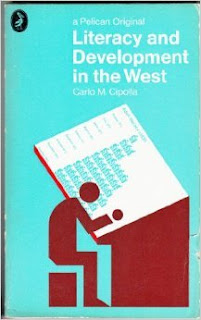 Book Review from the August 1969 issue of the Socialist Standard

Literacy and Development in the West by Carlo M. Cipolla Pelican Original, 1969

In this short book the author traces the development of literacy from a state of affairs in which it was “the sacred monopoly of small elites” to that in which it is thought of as being an essential skill of industrial society. He points out that “by 1750 at the dawn of the Industrial Revolution, almost 5,000 years had elapsed since the first rudimentary appearance of the art of writing, yet more than 90 per cent of the world’s population had no access to the art” and that “historically it appears that the art of writing is strictly and almost inevitably connected with the condition of urbanisation and commercial intercourse. It is not surprising that by AD 1750 the West was vastly more literate than any other part of the world. In the following 150 years the gap grew larger”. In fact industrial capitalism requires workers able to read, write, and calculate. As industrial processes and social organisation become more complex, so the working class have to be trained to think logically and tackle problems scientifically. This led to a situation where spending on education has grown to match that spent on armaments.

More emphasis is placed on statistics than on social theory relating to literacy and the many tables in the book are a goldmine of information for anyone wanting figures for “Illiteracy by age group; in selected European Countries” or “Illiterate brides per 100 illiterate bridegrooms in selected countries between 1880 and 1900” and so on. It comes down to a study in the growth of literacy with the advance of industrialisation. The author ends on a note of concern about the use to which knowledge is put. “Wherever we teach techniques we ought to teach also the ethical implications of their possible alternative uses and misuses.”

What the author and his fellow workers have yet to learn is that capitalism, which developed modern industry, has a set of priorities that allows no discussion, ethical or otherwise, of alternative uses or misuses of techniques. They will only be used if they are profitable to the minority who own the means of production. So that at present life becomes more and more subject to the anarchy of the profit motive. If it is to become more and more a function of human understanding, then a knowledge of how society organises its affairs is more important than techniques. It would be seen that those techniques that are beneficial to mankind would be used and there could be no misuse.
Joe Carter
Posted by Imposs1904 at 6:26 PM