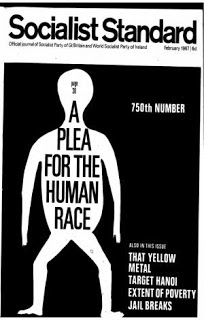 Target Hanoi
The start of this year was considerably dampened by the flood of crocodile tears provoked by the admitted bombing of civilians in Hanoi.

The tears flowed strongly as the eye witness accounts came in, especially those from Harrison Salisbury, assistant managing editor of the New York Times. Harrison’s reports also provoked a slight, but distinct, surprise that an American newspaper man should actually tell the truth about the results of his countrymen’s military exploits.

It is difficult to imagine anyone really believing the Pentagon’s assurances that only military targets were being bombed. This is a well worn fiction of modern war; even the RAF tried it in the last war. until the evidence to the contrary became overwhelming.

In any case, why the indignation about civilian deaths in wartime? The “advance” of capitalism's war-making machine has brought everyone into the front line.

War is now very much a social business, with many civilians playing a more important part in the war effort than many men in uniform. It is also important for a side to break the morale of the other’s civilians—usually by bombing or blockade.

The people of Hanoi, then—its children, its old people, its hospital patients—are all legitimate targets.

Does this sound callous? War is never an agreeable business and those who complain about its effects while they support the system which produces it, or those who demonstrate about the military activities of only one side, they are the callous ones.

As long as capitalism lasts there will be no end to war and we may expect it to become more and more fearsome.

The solution is not to wave banners about one incident or one aspect of war. It is to build a new society in which the cause of war no longer exists.


The Sinking Press
The once proud ships of the British newspaper industry are in dire trouble.

Almost certainly, the Sun (1,250,000) will be scuttled by the International Publishing Corporation when its obligation to keep it afloat runs out in 1968.

The Guardian (283,000) is fighting desperately but is badly holed—they are thinking about paying off a lot of the crew and one of their most distinguished officers— Gerard Fay—has actually jumped overboard to leave more room for everyone else.

Even the Times (273,000) is floundering, its only chance of salvation apparently being the sort of emergency repairs promised in the take over by Admiral of the Fleet Lord Thompson.

A lot of people—even the Prime Minister—profess to be unhappy about this situation.

But why are the papers sinking? Circulation is no longer of itself enough to pay a paper’s way. In the face of competition from other media like television, the newspapers have to fight harder for advertisers’ custom — and this, of course, goes in the main only to the papers with the really big readership.

What this means is that the advertisers say whether a paper makes a profit—sinks or floats—and that a paper must do everything it can to attract advertisements.

Now all the papers have always devoted a lot of their space to applauding the capitalist principle that profit is a glorious thing and that if something cannot be sold at a profit it has no business being made.

This principle is now being applied to the newspaper industry. And the press does not like it. But, as they have so often told other industries, there is nothing they can do about it.


Treatment at a Price
Last December a New York hospital was in trouble; $16,000 in arrears with the rent. Their bank foreclosed the mortgage and only the action of the doctors and nurses, who barricaded the entrances, prevented the patients being turned out onto the streets.

Last month in Houston, Texas, a father took his six month old baby to hospital for treatment. But he did not have enough cash on him to pay for it and the insurance policy he offered was not of a great enough value. The hospital turned him away and the baby died.

This is capitalism in the raw, where even medical attention is openly carried on on a ready cash basis.

In this country, as we all know, they organise things rather differently. A long time ago the British capitalist class appreciated the economy of spreading over the cost of a medical service, and of making the employers pay for some of it, so that all workers are kept pretty well in a constant state of fitness to work.

It seems inevitable that this will also come to America, although there is powerful opposition to it from the doctors, who think they can do better under the present hit and miss system.

If state medicine does come to America, no hospital will close over owing the rent and no parent will have to slap down ready cash before his children can be treated. The priorities of capitalism will still be working, but in a different way.

Everything will be nicely organised by the government —the drugs, the pills, the stimulants. Propped up by this, the American worker will stagger back to the factory. He may even think it is a good idea.

But in reality he will have exchanged one symptom of his poverty, ghastly though it is, for another.


Jailbreaks Galore
One thing which can be said in favour of the glut of escaping prisoners and that is that it gave the press a lot of entertaining stories at a time when news was distinctly short.

As the escape stories went on day after day. many people almost became convinced that Home Secretary Roy Jenkins was personally going around unlocking the prison gates. Time, and the fact that Jenkins is as determined as any other capitalist administrator that those who break capitalism’s laws shall suffer for it, may teach them differently.

What was forgotten was that in 1964 there were more escapes under “strict” Home Secretary Henry Brooke than in 1966 under “liberal” Roy Jenkins.

Indignation ran riot. Nobody seemed to have time to think that escapes are an unavoidable result of imprisonment. and that the prisoner and his helpers have the advantage of a lot of time and chance for observation and planning.

It was not the time to remind anyone that, as the celebrated Frank Mitchell has proved, imprisonment and violent punishment are not the answers to crime.

That was the tragedy—and the scandal, if you like.

Workers who are in their own little prison of wage slavery, of subservience to their employer, of mortgaged living, were loudly demanding harsher methods of restriction for other members of their class who had chosen to lake a chance on another sort of prison.

At no time did anyone ask about the cause of it all. and why human beings are satisfied with a social system which so defiles them and which, in one way or another, makes prisoner or gaoler of them all.