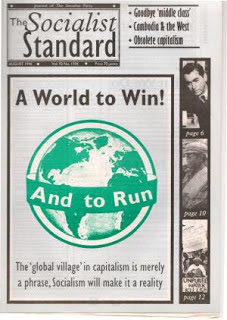 Capital corrupts democracy
Opposition supporters in Tirana, who claim that at least two of their number have been killed by government forces, held the first of a series of nationwide rallies yesterday to press President Sali Berisha to annul Sunday’s poll... The European Commission said yesterday it had received “disturbing reports” about the conduct of the election [in Albania] . . . Diplomats maintain that in spite of his increasingly embarrassing autocratic streak, Mr Berisha is also seen as the man best placed to forge ahead with unpopular market reforms. “What may be best for the region is not necessarily best for the democratic process in this country,” one Western official lamented.


Capital controls countries
The United States is confident that the G7 summit in Lyons will give its approval to a proposal to reduce the debt owed by the world’s poorest countries to the International Monetary Fund and the World Bank . . . Earlier this year, the IMF granted Moscow a huge $10.2 billion credit to support the reforms pioneered by President Yeltsin and will clearly want to review these arrangements in the light of the outcome of the poll . . . Under the debt reduction plan for the poorest countries . . . the World Bank and the IMF could eventually provide more than $10 billion of debt forgiveness to poor countries like Uganda and Bolivia, which have approved programmes of reform in place.


Capital games
Trebor . . . says the FA sent a solicitor’s letter threatening to sue for infringement of a trade mark over Trebor’s use of pictures of players in England strips [on cards in Candy Stick packets). The FA says that the appearance of its crest on players’ shirts means the shirts cannot be pictured or displayed without its permission nor, possibly, without payment for the use of the trademark.


Capital coerces
Britain has jumped ahead of its key European partners in the latest league table of competitiveness . . . British bosses . . . find it easier than all but two of their EU partners to hire and fire staff, “restructure” the labour force and avoid the social costs of employment.


Capital copper cock-up
World copper prices fell sharply when Yasuo Hamanaka, a trader for the Sumitomo Corporation of Japan, was discovered to have built up a $1.8 billion loss. Copper is heavily used in the telecommunication, electrical and automotive industries. The price reached $2,710 per tonne in May and fell to $1,855 in mid-June. Sumitomo owns 24 percent of the London Metal Exchange’s worldwide copper stockpile. The LME started investigating prices after complaints last November by major consumers.


Capital hauls in the Internet
The new buzzwords are “branding", “infrastructure” and “gateways” as big business tries to bring about a cultural transplant for the Internet—from a global mutual help society in which hardly anything is paid for into a source of corporate profits for the next generation . . . This week BT and its US partner, MCI, announced their plans to take control of the Internet.