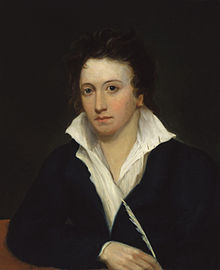 From the October 1992 issue of the Socialist Standard

I became acquainted with Shelley in 1944. At the time I was eighteen years of age and a Republican remand prisoner in Belfast jail. I liked poetry and, searching for something readable in the prison library—a cupboard which they opened twice weekly to the accompaniment of bawling screws, who could see no justification for delay in lifting one of the books—I found a treasure: The Complete Works of Percy Bysshe Shelley.

Eventually I got my own copy of Shelley and, over many, many years, I have prized it as the first real socialist literature I ever read. It is, I think, fitting that, on the 200th anniversary of his birth, an appreciation of his life’s work should appear in a socialist journal.

Poets, with their abstract notions of freedom and justice, can momentarily help a prisoner transcend the ignominy and degradation that the prison system imposes. But Shelley’s ideas of freedom and justice were no way abstract; his was no mere solace for the soul. Yes, there were the odes To The West Wind, To A Skylark, To A Cloud; beautiful word music in the classical tradition of English metrical composition.

But, more importantly, there was the wisdom that stripped to its essential ugliness a system of society that dissipates, wastes and destroys wealth in order to make its rich richer while mentally and physically impoverishing the producers of that wealth. There was the vision of a new world, a world of dignity and equality where cash would not be the measure of human need. And there was the indignation, the anguish, even the pain—sometimes written in a spontaneity of anger that defied the discipline of well-marshalled prosody. Here was a text-book of revolutionary thought that showed the futility of the cause for which I was imprisoned and extended my vision beyond the empty rhetoric of nationalism.

During his lifetime Shelley had come to Ireland to protest at the misery of the peasantry. Some Irish nationalists have equated this with sympathy for Irish nationalism but Shelley, whose constituency was the toiling masses everywhere, did not subscribe to the myth that the English working class were the beneficiaries of English imperialism. Thus, after hearing of the Peterloo Massacre at Manchester in 1819, Shelley wrote the Masque of Anarchy in which he describes the contemporary condition of the working class in England:


Asses, swine have litter spread
And with fitting food are fed;
All things have a home but one—
Thou, Oh Englishman, hast none!

This is Slavery —savage men,
Or wild beasts within a den
Would endure not as ye do—
But such ills they never knew.

This poem, consisting of some ninety-one short stanzas of varying lengths was written at Leghorn in Italy. According to his wife, Mary, when Shelley heard how the military murderers had waded into a peaceful reform protest “it . . . aroused in him violent emotions of indignation and compassion”. According to some purists, that anger adversely affected the quality of the poem.

Whatever its poetic qualities, Shelley’s Masque of Anarchy must rank, from a working-class standpoint, as the most didactic of English poetical works. His verse castigates every rotten facet of capitalism: its law, its judiciary, its priests, its parasite class and the foulness of its oppression. His words bear the reader along the path of anger and frustration seeking, it would seem, retribution, revenge.

But Shelley, in an age when violence was the tool of revolution, was too deeply perceptive of the need for democratic action if the revolution which he craved was to realise his vision. True, he makes us angry, makes us loathe this evil that murders people for profit but, on the crest of our anger, he stops us:


Then it is to feel revenge
Fiercely thirsting to exchange
Blood for blood—and wrong for wrong—
Do not thus when ye are strong.

What then? What should we do when “we are strong”? Shelley, the democratic socialist says we should use the unassailable power of our numbers. Poetically, he says we should think . . . decide:


Stand ye calm and resolute,
Like a forest, close and mute,
With folded arms and looks which are
Weapons of unvanquished war.
(…)
Rise like Lions after slumber
In unvanquishable number—
Shake your chains to earth like dew
Which in sleep had fallen on you—
Ye are many—they are few.

In 1888 Marx’s daughter, Eleanor, and her partner, Edward Aveling published an appreciation of Shelley under the title Shelley’s Socialism. The justification for their assumption is abundant throughout Shelley’s poems and prose writings.

In one of his notes to Queen Mab, Shelley quotes Godwin with approval: “there is no real wealth but the labour of man”. Prometheus Unbound, The Masque of Anarchy, Queen Mab, The Ode to Liberty, these, with his prose writings, his prologues, his sonnets and his songs chronicle the misery of the peasant and the wage slave but always, there is the optimism of the true revolutionary; the clarity of vision, as here in Prometheus Unbound, of a future where:


The Loathsome mask has fallen the man remains
Sceptreless, free, uncircumscribed, but man
Equal, unclassed, tribeless and nationless,
Exempt from awe, worship, degree, the king,
Over himself, just, gentle, wise.

In this passage from Queen Mab he criticises the way money contaminates all human relationships:


All things are sold: the very light of Heaven
Is venal; Earth’s unsparing gifts of love,
The smallest and most despicable things
That lurk in the abysses of the deep,
All objects of our life, even life itself,
And the poor pittance which the laws allow
Of liberty, the fellowship of man,
Those duties which his heart of human love
Should urge him to perform instinctively,
Are bought and sold as in a public mart
Of undisguising selfishness, that sets
On each its price, the stamp-mark of her reign.

He saw money, “paper coin—that forgery of the title deeds”, as capitalism’s instrument of theft; he saw slavery as a natural result of property society; he saw the poverty and alienation of the masses and, especially, did he decry the intellectual poverty and deception which capitalism inflicted on its wage slaves.