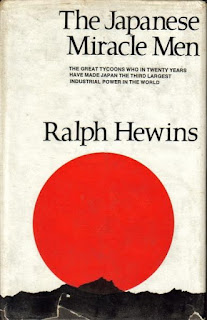 Book Review from the June 1968 issue of the Socialist Standard

In this book Ralph Hewins gives the “great man” version of Japanese industrial recovery since the Second World War. The majority of his heroes are over seventy years of age. Their careers generally reflect the successes and failures of Japan in the commercial brawls of capitalism.

During the period covered by this book Japan has been dominated by America. At first America set about dismantling war industries and trying to limit the power of the ruling class by introducing American-style trade unionism and democracy. This tended to play into the hands of the pro-Russia “communists”. These measures were relaxed during the Korean War when Japanese industry became an important supplier of war materials to the American forces. From then on Japanese industry prospered and soon surpassed its pre-war outputs. High quality and technical innovation has now replaced cheapness and imitations, which were previously the hallmarks of its industries. They have gradually dominated Far Eastern trade so that an industrial nation such as Australia has become a satellite supplying raw materials.

Japan is noted for industrial relations based on paternalism, where the worker is expected to stick with his firm for life and the employer to hold on to his workers through thick and thin. Promotion is based on seniority which may explain the great age of Japan’s industrial elite. This is gradually giving way to the western pattern of management with promotion supposedly based on merit and the work-force kept in line with the demand of the market. Hewins’ “wonder-men" show the universal nature of capitalism when talking of wages and trade unions:

Which typifies the philistine outlook of capitalists everywhere—and of Hewins, who eulogises them.
Joe Carter
Posted by Imposs1904 at 8:13 PM