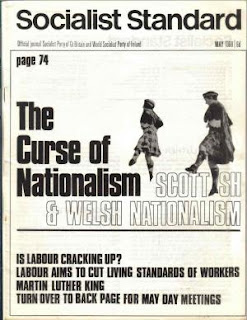 From the May 1968 issue of the Socialist Standard

The Labour government’s betrayal of its own policies has caused increasing disillusionment amongst its supporters. We recount here the effect this has had on a Labour Group in the North London borough of Haringey. Haringey council covers three parliamentary constituencies (Tottenham, Wood Green and Hornsey) and is Labour controlled.

For the 1966 Conference of the Labour Party in Brighton, Hornsey CLP chose M. Caffoor, from their youth section, as delegate. He intervened in the debate on economic policy to say that the Labour government seemed little different from a Tory one:

Then in February last year the council decided to cut its spending on buying houses (to rehouse people from the slums) by £472,000. Three councillors opposed this. One (Page) had the Whip withdrawn; another (Mrs. Dines) resigned it. The third (Norris) wrote in Labour Worker:


Only a ridiculously small number of councillors opposed the cut, pointing out that if the Labour party fails to get satisfactory results on housing, which is the main social problem in Haringey, how long will the working class carry on supporting them at the polls? . . .  If socialists cannot achieve even small reforms and progress on vital issues through working on local councils, then they will turn their efforts to more rewarding political activities. This frustration, and from a relatively progressive borough shows just how bad the situation is (April 1967).


We have always opposed the Labour Government's incomes policy and wage freeze. As long as the Labour Government intends to hold back wage increases such rent increases can only lead to a cut in the living standards of working-class people in the borough—just at a time when many families are facing redundancies and changes of job (Hornsey Journal, 21 April 1967).

Some of these later helped organise the Haringey Federation of Tenants and Residents Associations to resist the Labour-imposed rent increases. In a local by-election the HFTRA distributed leaflets which happened to bear the name of E. Wheeler. For this the Wood Green Labour Party expelled him.

In October two councillors (Page and Parker) resigned. In November another (Wigley) joined them:


I entered politics to play my part in helping society to progress towards a life of security for all. However, subsequent events have shown me that our Labour Council does not share my enthusiasm (Hornsey Journal, 10 November 1967).

Wigley stood as a “People’s Candidate", with tenants backing, in one of the subsequent by-elections. Page was his election agent. He polled 498 votes against 831 for the Labour winner and 399 for the Tory.


The last straw really was the recent economy measures, particularly the prescription charges which seemed to be the final proof of non-socialism in the Government (Hornsey Journal, 16 February 1968).

Meanwhile, those still left in the Hornsey party were considering a suggestion, pushed by the chairman (Caffoor) and secretary (Hinchliff) of their youth section, to break with the national party. Caffoor and Hinchliff wrote:


The time has come when Labour Party members must stand and fight for democracy inside the Labour movement. This will not be done by passing anaemic resolutions, but only by the constituency Labour parties organising collectively against the repeated betrayal by the Labour Government of specific electoral policies of the Labour Party, and fighting for the implementation of these policies. This is why we shall be moving a motion at the Hornsey party meeting next month which calls for disaffiliation by all the constituency parties from the national organisation in the event of the National Executive Committee refusing to dissociate the Labour Party from those Government policies which contravene the declared policies of the Labour Party (Hampstead and Highgate Express, 23 February 1968).

But the night this was to be discussed another morale-shattering blow fell—Labour’s colour bar Commonwealth Immigrants Act. The meeting adjourned to lobby the Tory MP for Hornsey. To no avail. The racist measure went through. As a result two more councillors (Mrs. Dines and D. J. Ding) resigned both from the Council and the Labour party. Mrs. Dines pointed out:


The Immigration Bill introduces two classes of citizens, one white and one coloured, and for this country that is the most foolish thing the Government could have done. Lots of people think the immigrants are inferior to start with, and this Bill is endorsing their views (Hornsey Journal 8 March 1968).

One of Labour's local council candidates, Ulric Thompson, an immigrant from Guyana, also withdrew in protest. Finally, at the end of March Councillor Norris gave up:


I felt I could no longer support a party introducing measures which hit the working classes and which were not being resisted by the local party. As regards the two main parties, it's now a choice between Tweedledum and Tweedledee—they are both the same (Tottenham Herald, 22 March 1968).

And what did boring-from-within achieve? And don't let us forget that those who are now getting out of the Labour Party, in telling workers to vote for that party, must share some of the blame for its actions.