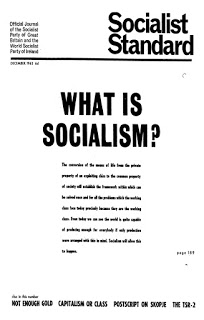 From the December 1963 issue of the Socialist Standard

We are being asked to concern ourselves with another crisis, caused this time by the decline in the American gold reserve and by the steps the American Government proposes to take to stop the loss.

The alarm was sounded in an article in the Economist of July 27 of this year, and the problem has since been discussed at conferences attended by financial authorities of ten leading industrial countries at Washington in October, followed by meetings in Paris last month.

A natural reaction of those who are unfamiliar with the intricacies of the problem is to leave it to the experts to tell us what to do. Unfortunately for that view the “experts” are unable to agree on the solution, or even on the problem. As recently as a year ago the late Per Jacobsson, Managing Director of the International Monetary Fund, speaking in Washington, said there wasn't anything to worry about. The Daily Telegraph on September 18, 1962, reported him as saying that “there were indications the world was approaching a state of economic equilibrium solid enough to withstand monetary tension." In particular he believed that it would be possible "to assure a stable exchange rate structure without altering the price of gold," and that "the ample monetary reserves of individual countries, together with central bank credits, and the increased facilities of the Fund, provided formidable lines of defence against any pressures that might arise.”

But the Economist article, referred to above, denies everything that Dr. Jacobsson said and demands early action to do the things he said were not necessary. It also threw in the interesting titbit that the banking experts do not know their job at all—"The difficulty lies with bankers all over the world who still do not really understand modern monetary economics.” (It will be interesting to look later at some of the odd economies of the Economist),

The Financial Times on September 9th added the further observation that the central bankers (who according to the Economist don't understand what they are doing) cannot ever agree among themselves. It pointed out that while the bankers of the Bank for International Settlements "dismissed the problem of international liquidity as artificial,” the other lot in the International Monetary Fund "takes a very different line," and the paper calls on governments to take action to stimulate demand. The Financial Times actually quotes the late Dr. Jacobsson as having urged courses the reverse of those he was advocating in September, 1962. So much for the experts.

What then is the problem? It is a truism to say that the exports of goods and services of all the countries in the world balance the imports of all the countries in the world: two ways of looking at the same thing. But in practice any one country may at a given time be exporting insufficient to pay for its imports, or may be exporting more than enough to pay for its imports: again, the total “surpluses ” of exports over imports balance in amount the total "deficits."

What then happens to a country which is importing more than it can pay for by its exports? If it had large gold reserves or reserves of dollars or other currencies it might use them to pay for the excess of imports. Or it might pay for them out of loans or gifts or capital investments from one of the countries running an excess of exports over imports: the United States is such a country, in spite of which it is in difficulties. American exports do exceed its imports, but the amount of American money spent abroad in aid, loans, investments, tourist spending and the maintenance of armed forces has been so great that the huge American gold reserve has been running down at the rate of $3,000 million to $3,500 million a year, and the American Government proposes to cut its foreign spending deficit by that amount. The Economist admits that in theory this should not matter because other countries running a surplus of exports could themselves step up their own foreign loans, investments and did to the countries running a deficit. "But everybody knows that the pattern of deterioration will not work itself out with this marvellous neatness, and that all the finance ministries of the world are not sufficiently enlightened to react to it with absolute logic."

Instead, thinks the Economist, the developed countries which could step in to fill the gap will not do so but will start cutting their imports and production to protect their own reserves of gold, etc.; and the underdeveloped countries will have to cut their own development programmes because the capital they need from outside will not be forthcoming. Then there could be a general world lessening of trade, with an increase of unemployment as has happened so often in the past century and a half.

To Socialists this is just another demonstration of what an anarchic, unstable and wasteful system capitalism is, and of the need to end it and get the world operating on sane lines. Not so to the Economist and the rest of the experts. For the writer in the Economist, “the best and most idealistic method” is not the commonsense one of ending a system which does on repeating crises of this kind but the idea of establishing "some new international central bank that would create some $3,000 or $3,500 millions a year of new deposits with itself which it could put to the credit of underdeveloped countries."

This makes sense to the Economist because they believe that it is all due to there not being enough money, but while the Economist waits to form still another bank to offer to lend still more money, the Guardian city editor on September 30 was reporting that one of the existing two international bodies, the World Bank, is facing the dilemma of having money to lend but not being able to find borrowers to whom it is safe to lend it:


The problem is not a lack of money but rather a lack of borrowers—at least of borrowers who can meet the stiff terms on which the bank has so far always insisted when making loans.

Despite this the Economist believes that there is not enough money about and that this is due to scarcity of gold:
There is at least some element of truth in the ridiculous thought that if some aged prospector in Australia in the last century had made a luckier strike in the outback, or if the ancient Egyptians had given the first mystical monetary significance to some commodity which had subsequently proved to be more easy to produce than gold, we would not now face quite the same danger of unnecessary restriction of world production and trade as we face today.

What the Economist does not recognise is that the exchange rate between commodities, including gold and silver, depends basically on their values. The total world output of silver, measured by the tonnage produced, is six or seven times the output of gold, but the value of gold (on the current price relationship) is about 28 times the value of silver, ounce for ounce. So if the world used silver for its reserves instead of gold, or if gold were so plentiful than an ounce of gold could be mined as cheaply as an ounce of silver, the gold or silver reserves of the world would need to be something like 28 times as large by tonnage as they are now, the price of each ounce being one twenty-eighth of the present price of gold. The Economist would consequently still be saying, during recurrent balance of payment difficulties, that it was all due to the insufficiency of the then not-so-precious metal.

In the meantime, the Russian Government is helping to lessen the immediate problem by using the hundreds of millions of dollars of its gold reserve to buy wheat in Canada, U.S.A. and elsewhere because of the failure of the Russian harvest. This throws light on the real nature of the problem. Vast quantities of wheat and other foodstuffs have been produced in those countries and held in store because it was surplus to market demand and could not be sold profitably.

Russian gold has been there all through the years that the American Government has been holding the unsaleable stocks, and the Russians could have bought if they had wanted to. They didn't want to because they, too, had surplus foods in years of good harvest. And all the lime, side by side with private hoarders who hold enormous quantities of gold, there have been hundreds of millions of people (including some in America and Russia) who would have been glad to have more food but lacked the money, and they lacked the money not because of a mistake by the ancient Egyptians but because capitalism divided the population into owners and non-owners, into rich and poor.

The ideal and only practical solution to a problem that capitalism cannot solve (except in the temporary fashion of each expansion of production and trade being followed by a contraction) is to get rid of production for profit and for the market.