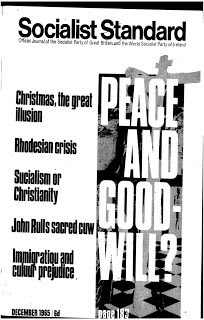 Editorial from the December 1965 issue of the Socialist Standard

Peace on Earth and Goodwill to all Men.

This Christian slogan, which we hear so often at this time of year, may give some comfort to those who are susceptible to it.

But what is it worth ?

Peace On Earth. This year has had no Cuba, no Berlin crisis, nor any other comparable event to make us fear that we were coming to the brink of the third World War. By the standards of modern capitalism, 1965 may seem to have been a peaceful year.

Peaceful, that is, if we ignore the minor outbreaks like the fighting in Dominica, the Congo, Aden and a host of similar places. Peaceful if we forget the flare-ups in the Rann of Kutch and Kashmir. Peaceful if we take no account of the bloody struggle in Vietnam.

What is the cause of these wars? A lack of goodwill? We live in a social system in which competition—-between companies, between countries, between groups of countries—goes on all the time. It cannot be avoided—and neither can its consequences. Periodically international competition has to be transferred from the conference halls to the battlefields, adding another war to capitalism's history of bloodshed.

People may protest against this, as many of them have protested against the war in Vietnam. But the protests are futile. Modern war is caused by the nature of capitalist society and the only effective protest we can make against it is to change society into one where the conflicting interests which give rise to war are absent.

Goodwill To All Men. This year we have had the riots in Los Angeles, with their background of simmering revolt against racial oppression. We have had the conflict over Rhodesia, underlaid with clashing economic interests and racial intolerance. We have seen the ever-tightening screw of immigration control in this country, as the Government tried to appease an awakening racism among the British working class. We have had the usual bouts of strikes and other symptoms of social disharmony.

There have, of course, been people to regret this situation.

But again, their protests are futile. Racial theories among the working class can in large part be attributed to their insecurity and to their poverty—to their housing difficulties, their fears for the future of their jobs. It can also be partly explained as a reaction when workers see an easily identifiable minority using already inadequate hospitals, schools and other so-called social services, and to an ever-present desire to find a scapegoat for the problems of life in capitalism.

The competition between one worker and another over a job, or a house, and the strikes and other disputes which go on year after year, are nothing more than a symptom of a basic feature of capitalism—the fact that the vast majority of people have to sell their working abilities in order to live.

In these conditions, the slogan Goodwill To All Men is meaningless.

It is useless to wish that human beings would not behave in anti-social, non-co-operative ways as long as the working class support a social system which encourages, sometimes even forces, them to act in those ways. After all, many of capitalism’s most respected leaders have got where they are by displaying anything but goodwill.

The world is in an agony .of dispute. Only by a basic change in society—by a social revolution by the world working class to end capitalism and replace it with Socialism—can this agony be ended.

When that revolution comes we shall have lasting peace and goodwill will no longer be a pious slogan, but an established and accepted part of human existence.
Posted by Imposs1904 at 9:58 AM