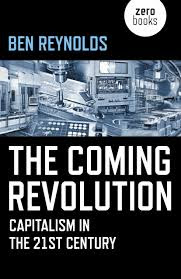 Book Review from the April 2019 issue of the Socialist Standard

The Coming Revolution. Capitalism in the 21st Century by Ben Reynolds (Zero Books)

‘Capitalism is not destined to go on endlessly accumulating until the sun burns out. Capitalism will collapse of its own internal contradictions within the 21st century, within the lifetime of children born today,’ so claims Ben Reynolds, author of The Coming Revolution. Capitalism in the 21st Century published by Zero Books last year. The first sentence is true, but what about the second which Reynolds bases on something Marx wrote? Is there anything in it?

Falling prices
Under capitalism wealth takes the form of ‘value’, the economic value of a commodity (as an item of wealth produced to be sold) being determined by the time it takes to produce it from start to finish (i.e., including to extract and transport the materials, the wear and tear of the machines used to produce it, etc.). Spurred on by competition between capitalist firms in pursuit of more profits, the tendency under capitalism is for productivity in the sense of the amount of wealth produced per worker to increase, or, from another angle, for the amount of time it takes to produce items of wealth to decrease. If it wasn’t for currency inflation this would manifest itself as a fall in the prices of commodities; when inflation is discounted the real price of most items of wealth has in fact been falling.

In the Grundrisse, some notes Marx made for himself in 1857-8, there is a passage that has come to be called the ‘Fragment on Machines’ (LINK), where Marx speculated on what would happen if this process of increasing productivity and falling prices continued to its limit. His conclusion was that it would lead to prices becoming zero or as close to zero as to make no difference. It also implied an enormous development of technology and its application to production. But if prices fell to zero, this would undermine the whole basis of capitalism as a system of producing wealth as value measured by labour time. Capitalist development, Marx wrote, was contradictory in that ‘it presses to reduce labour time to a minimum, while it posits labour time, on the other side, as the sole measure and source of wealth.’ The enormous development of the forces of production to the point where little direct human input was required would bring this contradiction to a head:

In other words, commodities would be so cheap that they would have to be given away free, which would remove the incentive of capitalist firms to produce them as there would be no profit to be made by doing this. Production for sale with a view to profit would come to a stop.

This, in fact, is the only place in the whole of Marx’s published and unpublished writings where he used the words ‘break down’ (zusammenbrechen) in connection with capitalism as an economic system. Not that this is how he expected capitalism to come to an end. This passage was a thought experiment about what would happen if capitalism were to continue indefinitely and which showed that in fact it couldn’t. Marx’s view about how he expected capitalism to end is set out at the end of the last-but-one chapter of Capital on the ‘Historical Tendency of Capitalist Accumulation’ where he wrote that the working class would end capitalism by ‘expropriating the expropriators’, i.e. by human action not mechanical breakdown.

On the basis of this fragment, a whole school of critics of capitalism has grown up. Reynolds is one of them and argues that capitalism has nearly reached the end point in Marx’s thought experiment. Hence his prediction that it will collapse before the end of the century, paving the way for

What we call ‘socialism’ but which he calls ‘communism’, not that we have any objection to that as for us the two terms mean the same and are interchangeable; though not for him as we shall see.

Technological developments
Reynolds bases this prognosis on two ongoing technological developments: 3D printing via the internet, and robotics and artificial intelligence. He points out that already the written and spoken word, moving images and music are, in principle, free for anyone with a computer linked to the internet (‘in principle’ because in practice states try to prevent this through artificial ‘intellectual property rights’). What permits access to these is access to a computer code which, once drawn up, costs nothing to reproduce. The same applies, he emphasises, to 3D printing, to produce physical things; this too depends on a computer code that costs nothing to reproduce. Still in its infancy, this will allow anyone with a computer linked to the internet, and plastic material to work on, to make things of everyday use. He expects this to catch on and then, when it does as he expects it will in the course of this century, a whole range of products will be taken out of commodity production as people will be able to produce them directly and more cheaply for themselves.

The other technological development he sees as undermining capitalist production is robotics and artificial intelligence. He mentions a factory in Japan which operates 24/7 without human presence, known as a ‘lights out’ factory since, because no humans are there, the lights don’t have to be switched on. These, too, he says are going to spread and affect not just the physical production of goods but office work, teaching and health care as well. Mechanisation has gone on since the beginning of capitalism but, because capitalism continued to expand, the displaced workers were able to find jobs in other or new sectors of the economy. Reynolds says that this won’t happen this time due to this ‘radical automation’ which he defines as ‘a long-term decline in the demand for inputs of labor caused by automation’, a decline in total hours of labour across the whole economy, that is, not just to produce particular commodities. In other words, the demand for labour-time won’t increase through the continued expansion of capitalist production as before; capitalism has reached an impasse, which is manifesting itself in rising unemployment, even if partly hidden by David Graeber’s ‘bull-shit jobs,’ and in a lack of profitable outlets which means that capitalism is in a state of permanent ‘overaccumulation’ (‘when so much capital accumulates in a capitalist economy that there are few possible outlets for profitable investment’).

Are we really there?
Is this correct? Is capitalism approaching the end-point in Marx’s thought experiment? No, as productivity is nowhere near as high as Marx posited. An appreciable amount of labour-time still has to be spent to produce most goods. Reynolds does not seem to believe it either as he doesn’t see capitalism being immediately replaced by communism but by something he calls ‘socialism’ (defined as ‘a socioeconomic system where the means of production are owned by, controlled by and operated for the benefit of the working class’). Under this, commodity production (production for sale) and value measured by labour-time will continue, but organised by workers’ cooperatives. As he admits:

The form of socialism outlined previously is still built on labor, with the workers instead of capitalists reaping its fruits. It still requires forms of money, coercive taxation and meaningful scarcity to function (pp. 248-9).

The transition to Marx’s theoretical end-point of capitalism is to take place under this ‘socialism’:

Ultimately, labor-time will be reduced to zero. The means of production will be commonly held, work will be purely voluntary, and goods and services will be provided free for all who need them (pp.251-2, emphasis added).

The trouble is he doesn’t say how long this is to take. It could in fact take longer than by the end of this century for productivity to rise so high that the labour-time cost of goods falls to zero, even sometime in the 22nd century. So, all he is saying will happen this century is that capitalism (as we know it) will collapse and be replaced by his ‘socialism’ which is in reality the sort of ‘market anarchism’ advocated by Marx’s contemporary and rival Proudhon, an unnecessary and ultimately futile attempt to create a commodity-producing economy without profits or capital accumulation.

Already developed enough
In any event, it is not necessary for production to be ‘fully automated’ for a communist (or socialist, in its proper sense) society to be feasible. For this, what is required is that the means of wealth production should be owned in common and production geared to meeting people’s needs directly instead of as now for sale on a market. True, it does require the forces of production to be able to turn out plenty to adequately feed, clothe and shelter every man, woman and child on Earth, a point reached years ago.

Despite not being ‘fully automated’, such a society would not produce wealth as value. As Marx put it:

Within the co-operative society based on common ownership of the means of production, the producers do not exchange their products; just as little does the labour employed on the products appear here as the value of these products, as a material quality possessed by them… (Critique of the Gotha Programme, 1875, his emphasis).

Marx wrote this with reference to an early stage of communist society when the productive forces were not yet sufficient, as they wouldn’t have been in his day, to go over to full free access based on the principle of ‘from each according to their ability, to each according to their need’. In other words, he for one did not think that a communist society would not be possible until the end-point in his thought experiment had been reached. What disappears in a communist society is not work, but value-producing work, or ‘labour’ (Reynolds in fact brings out well this distinction between ‘work’ and ‘labour’). People will still need to work in a communist society, only this won’t produce ‘value’ as the products would not be being produced for sale and so would not have an exchange-value. Such work will simply be producing use values as useful things and services.

What is encouraging about books such as Reynolds’ is that they represent a return to discussing a society without production for sale, measurement by labour time, and value, as a practical possibility opened up by the continuing development and application of science and technology to production.
Adam Buick
Posted by Imposs1904 at 9:25 AM