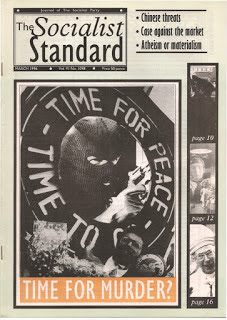 The review of Bill Mcllroy's pamphlet, Foundations of Modern Humanism (January) is a history of the movement to break free from the shackles of superstition. It is, therefore, of necessity a history of assorted radicals. Liberals and Tories who, often at great personal cost, opposed religion and the barbaric blasphemy laws of their day.

The history of eighteenth and nineteenth century humanism, like the history of the Tolpuddle martyrs, does not deal with socialism because it took place before there was an organised socialist movement.

Unless people can cast off the superstitious beliefs inculcated by priests, shamans and witch doctors then it is impossible to build a more rational society. The Freethinker and Bill Mcllroy's pamphlet, like the Socialist Standard, are first class at depicting the tyranny of religion. And whilst it is true to say that the Socialist Standard provides a socialist analysis of the case against religion which is missing from Foundations of Modern Humanism, surely that is beyond the scope of the period with which the pamphlet deals.

Reply:
Actually, you are wrong. The early rationalist and socialist movements did exist at the same time and the key figure in 19th century rationalism, Charles Bradlaugh, was a notorious opponent of Socialism. For him, there was nothing wrong with capitalism as an economic system. All he wanted was capitalism without religion. So our reviewer was right to point out that Socialists are opposed to such "bourgeois free thinkers" who attack religion and nothing else.

Then of course there is Karl Marx. He had become an atheist in the 1840s (having been brought up as a Protestant Christian) before he became a Socialist. His criticism of religion, however, was different from that of the bourgeois free thinkers of his day since he made the point that the criticism of religion led to a criticism of the social conditions that gave rise to religion. Or rather should lead to such a criticism, and it was precisely because pure-and-simple atheists did not make this step that he criticised them too.

The social conditions which gave rise to religion were not, in Marx's view, feudalism (that only gave rise to a particular type of religious belief) but any society in which the great bulk of the population were denied control of the products of their labour and in which these products therefore confronted them as an outside, alien force controlling their lives. Religion—and its core belief that only some outside super-being, not humans themselves, by their own collective efforts, can bring about a better world—reflects this lack of power and lack of control over their own lives which most people experience. But most people experience this under capitalism too, which is based, precisely, on their exclusion from the ownership and control of society's productive resources and on the subordination of production to blind and uncontrollable market forces.

So, a consistent criticism of religion leads to a criticism of capitalism. In fact Marx’s analysis leads to the conclusion that religion won’t die out on a mass scale till capitalism is replaced by Socialism as a society where people do control the products of their labour and so their destinies generally.

As long as capitalism continues—or at least until there is a mass, conscious and self-confident movement for Socialism— religion, as the anti-human doctrine that we humans can’t control our lives but need the help of some outside super-being, will continue to survive in one form or another. The form changes—traditional religious beliefs are being replaced by New Age mumbo-jumbo—but as long as humans don’t in fact control their lives then religious beliefs will survive.

In not working for Socialism. but just attacking religion, bourgeois free-thinkers and pure-and-simple atheists are in fact hindering the achievement of their own proclaimed goal of a world without religion.


Based on common sense

I am very interested in your statement, in reply to a letter in the January Standard, that “such people [those who believe in an after-life] are ineligible to join the Socialist Party (but they can be sympathisers)”.

Neither the Party’s adverts in the Guardian nor its published aims state that atheism is a condition of membership—in fact, they don't mention religion at all. At the end of the Declaration of Principles it says: "Anyone agreeing with the above principles and wishing to join should apply to nearest branch or Head Office.” If anyone who is a theist, or is at least open to the possibility of the existence of God and an after-life, agrees with the principles, why should he or she not be allowed to become a member of the Party?

I have recently read your excellent pamphlet From Capitalism To Socialism. Apart from the statement on page 12: "Wars are not fought over pious ideals like justice, nationhood, democracy or religion”, there is no mention of religion. Neither is there any mention of Karl Marx. It is based on common sense and nothing that a religious believer or someone who had never even heard of Marx could not agree with.

Have you thought through the implications of your permission for people with religious beliefs to be “sympathisers"? You are, in effect, saying to such people "although we think you are mis-guided fools and although we sneer at you every month, we will gladly take your money, whether it be in payment for our journal or in donations for the support of candidates in the General Election".


Reply:
The reason why the Socialist Party doesn't admit religious people to membership is that we regard their views, on what is after all a key issue (the nature of human existence), as wrong. In the same way, people who want to support the Labour Party or who think that Russia was socialist are not admitted to membership.

Actually, although this is, probably inevitably, how others would classify us, we do not call ourselves “atheists”. The word “Atheism” suggests a concern with opposing religious ideas in particular whereas we are concerned with promoting socialists ideas. (In fact pointing out the mistaken ideas of religious people only forms a small part of our activity, as you have noticed.) We prefer to describe ourselves as “materialists”, i.e. as people who hold that all we humans know, and can know, is derived from the experiences of our senses of the material world that surrounds us and of which we are a part.


The existence of a super-being called god or of an afterlife for humans is theoretically possible, as part of this material world. These can’t be ruled our a priori. However, neither of these hypotheses has been confirmed in accordance with methods and tests of science—the phenomena brought forward to confirm them can be much more plausibly explained in other ways. A rational, logical person ought therefore to dismiss them as disproved hypotheses.

Religious people do not do this. They are therefore thinking illogically. This wouldn’t be so bad (Socialist Party members don’t think logically all the time) if it didn’t concern a key aspect of the Socialist case: human nature.

The materialist approach, which Socialists take, sees humans as the product of biological and social evolution (not the creation of some super-being), that individual humans have brains and minds which cease to exist when they die (and not souls or a spirit that pre-dates birth and survives death), and that the only way humans can improve their lives is by their own collective efforts (not by relying on some outside intervention from some super-being or beings). This life is the only one we arc going to get and we should therefore try to make it the best possible both for individual humans and for the whole human species. Given the present stage of human social evolution, this can only be done within the framework of a society based on the common ownership and democratic control of the Earth’s resources.

This is the, if you like, "philosophical’’ basis of the case for socialism. It follows from a scientific approach to human existence and problems. Religious people don't, and can’t share, this view. They can only see this life as some sort of preparation for a better life after death. Since not all of them are committed to the pessimistic and anti-human doctrine of the depraved nature of humans (though they have to be if they arc orthodox followers of the world’s two main religions, Christianity and Mohammedanism), some unorthodox religious people can find a religious justification for wanting Socialism. We know from experience that such people exist (perhaps you are one). What they then do is up to them. Some subscribe to the Socialist Standard or support our work in other ways. They don’t need our permission to do this. It’s their choice made, presumably, in the knowledge of our views on religion.
Editors


Could Jesus be a member?

I read with interest the letter from Max Hess of Folkestone, and your reply, both in the January issue. I am not religious, indeed I am anti-religion when I consider the many problems and bloodshed that religion has caused throughout the ages, but when it comes to being a believer in an afterlife and also a believer in Socialism, I find I have some sympathy for what Max Hess has to say.

I was pleased to read in your reply that you accept that there can be believers in an afterlife who also want socialism. This is the first time I have known you to make this assertion. But I find it difficult to understand how anyone sincerely believing in the necessity to abolish capitalism, and at the same time having an afterlife conviction, can automatically be ineligible for membership of the Party, even though I appreciate your concern about anyone holding membership who could undermine the Party’s claim to rational, logical argument.

Whether God is, or is not, a socialist is not worthy of argument, but it is interesting to note that much of what Jesus taught and did could qualify him for membership.
George Pearson,
London SW20


Reply:
You say that it is not worth arguing whether or not so-called "God” is a socialist (we agree, but only get into such futile arguments because some people claim that he, she or it is), but you then go on to suggest that another mythological figure could qualify as one!

But there is no historical evidence that there was such a person as Jesus. The New Testament was written years after the time he was supposed to have lived, while references to him in ancient non-Christian writings have long been exposed as forgeries by mediaeval monks.

What undoubtedly did exist was a break-away Jewish sect known as "Christians" because they believe in the imminent second coming of a mythical demi-god they called "Christ” who would save them. They were millenarians who believed, rather like today’s Jehovah's Witnesses, that the end of the world was nigh and so attached no importance to human efforts to try to establish a better world down here. In other words, the exact opposite of the socialist approach.

To tell the truth, we can't think of a single thing their mythological founder is supposed to have taught and done that would qualify him as a socialist.
Editors
Posted by Imposs1904 at 1:44 AM