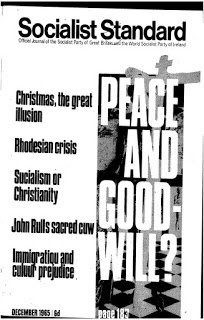 You and Your Job
Have you what is commonly known as a “good job”—one that has “gd. sal. to right person and excel. conds.” as the small ads put it? Even if you can answer yes to this, even if you are one of the more highly paid workers today, it's still a pretty certain bet that you have a struggle to get by at whatever standard of living you are accustomed to and are expected to maintain. And because you are a worker, you will always have to count the pennies at some stage or other before you can have things which you may particularly need. “Consumers choice” is a pretty empty term under these circumstances—the restriction of choice begins in your pocket, not in the shop window.

But accepting that we all live a pretty narrow sort of life with drabness and insecurity in varying degrees according to size of pay packet, what do you really think of your job? By that I mean just what do you think of the work that you have to do, the duties and responsibilities that it entails? If we are again to judge by the small ads columns, there is no such thing as a dull, monotonous, boring job; “interesting work” is always their claim, but they are usually careful to add “gd. hours”, which is a hint of what they really think of the mental attraction of the job. They know that no one will want to stick at it a second longer than necessary and that come knocking-off time, the factory or office will be deserted within minutes. And although many workers do work overtime, it’s not generally out of love for their work, but because of the extra cash.

Before the war, when jobs were scarce, you just had to put up with the monotony and make the best of it, but in a time of labour shortage like the present, this is one (but only one) of the factors which make for frequent job changes, particularly among younger workers. One young man still in his twenties was recently reported as having had some hundreds of jobs since leaving school. Despite the reformer’s prattle about “opportunities for youth”, the essential conditions of capitalism—the division of labour and the worker’s divorce from ownership of the means of production—will throw up this problem more and more as time goes by.

These thoughts are prompted by a small cutting from The Guardian of October 14th. Mr. J. E. Newton, general secretary of the National Union of Tailors and Garment Workers, has drawn attention to this very problem. He thinks that workers are getting less and less satisfaction from their jobs and wants Mr. Brown to set up a ministry of industrial psychology “to find out what workers think of their jobs” and “try to redirect personal interest to the workplace or provide the means for obtaining other satisfactions outside work.” Without wishing to be rude to Mr. Newton, I think we could well be spared yet another government ministry, especially of psychology (what a horrible thought). And why does he want an investigation to find out what he seems pretty certain of already, anyway?

But his other proposal is interesting. I think it suggests that he does not have much hope of workers ever being able to get fulfilment from their jobs. Indeed, he admits by implication that the search for it outside of working hours is here to stay, and of course he’s quite correct. I should say that it will last as long as capitalism; in fact, catering for pastimes and sports has become an industry in itself. Many of us have hobbies of one sort or another and we often work harder at them than we do at our jobs. Others vent their frustrations on old ladies, telephone kiosks and railway carriage upholstery—a particularly ugly trend which is really just the other side of the same coin.


In a Socialist World . . . ?
Yes, you have a right to ask that question. In a Socialist world we would work, but work would take on a new meaning. It would not be synonymous with employment, which is merely the means of getting a living wage, but since it would aim at the full satisfaction of people’s needs, it would be also a way of expressing and developing ourselves to the fullest extent. True we would work to live because that is essential in any society, but we would also live to work. I should think that monotony and frustration would be well-nigh impossible under such conditions, not least of all because the heavy specialisation demanded by capitalism would disappear. And we won’t need any psychologists to try and teach us how to kid ourselves we’re happy when we’re anything but.


An Old Story
My father is an old age pensioner and belongs to the local old age pensioners association. The other day he handed me a copy of Pensioner’s Voice, the official publication of the National Federation of O.A.P. Associations. “We speak for the older generation,” says the caption at top right on the front page, and it’s a good job that somebody speaks for them, but let’s see how effectively Pensioner's Voice manages to do this..

Right off, it denies any political affiliations and claims it has always advised its members to “support any candidate who will support us.” Now that should pose quite a question. After all, you have only the election address and speeches of your candidates to go by and the one who does not promise support for the pensioners must be a rarity indeed. You could of course try eliminating from your support list those who had a poor record on the pensions question, but then that would mean eliminating the lot if you were really honest with yourself.

Actually, I was struck by the naivité of this journal. The National Federation was formed twenty-five years ago and represents millions who have a lifetime’s experience of working class existence behind them. Yet it still puts the view that Parliament is an impartial body—taken as a whole—and that “all the political parties should be willing and anxious to see that justice is done.” Now let us assume you are a pensioner and acted on the Federation’s advice during the last election. Perhaps you voted Labour, in which case on Page 3, you will find the Rev. T. E. Nuttall complaining vide the government’s national plan, that:—


. . . We cannot find anything in the white paper about the electoral promise on an entirely new policy to provide an adequate income for each pensioner . . .

Pensioner’s Voice has an interesting editorial comment comparing the lot of a £4 a week pensioner with that of a shareholder in I.C.I. It mentions that their £50 millions capital issue in early September was heavily over-subscribed. Not only was this a well written commentary on the glaring inequality that is capitalism, but by this very comparison the writer spotlighted the indignity which is built into working class existence. Yet is there any real questioning of such a world, or even the faintest spark of anger? Not at all. Just a pathetic appeal to put “all hands to the pumps to make his (the pensioner’s) life a bit easier.”

In looking at the pensioner’s movement in Britain over the last few years I have noted this attitude, which runs like a thread through its literature. Always it is an appeal, rather than a demand, for better income and social services. Granted that old workers do not have the same vigour to push their interests as youngsters have, but the really big factor behind their failure is their lack of bargaining power because they are now out of the production line. This is the biggest slap in the face that capitalism gives them.


So to them, the need for Socialism should be of particular interest, and it is especially sad that many of them will die without ever having considered it.


Gaspers
“. . . We are under the constant survey of foreign friends . . . Any back sliding on our part, which lays us open to accusations that we are . . . putting social needs before financial responsibility, would very quickly cause the leaves on the plant of confidence to shrivel.” (Lord Cromer, 21/10/65)

“It is a remarkable thing how in the last quarter of a century the doctrine of Socialism as a way of life . . .  is everywhere, even in Russia, thoroughly discredited.” (Lord Shawcross, ex-Minister in the 1945 Labour Government. 4/11/65)

“One MP suggested the skinning alive of hanged men and the use of their skulls as beer pots.” (The Guardian, 11/11/65, reporting the debate in the Malawi Parliament on the Penal Code Amendment Bill)