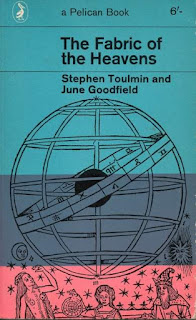 Book Review from the December 1965 issue of the Socialist Standard

The Fabric of the Heavens by Toulmin and Goodchild, Pelican Books 6s.

This is the first of four books in a connected series entitled The Ancestry' of Science. It is a book of interest to socialists for the authors view of history is akin to the Materialist Conception of History, and they have applied it to the development of astronomy and dynamics, ".  .  . a man can do in his own time only a job which is there to be done; but there may be many different ways in which he can do it.” Although they raise this point with reference to Isaac Newton, their whole work is evidence of this development within history from the Babylonians through to modern times.

They contrast this view of history with the deterministic "the acts of historical drama will follow one another of the same general sequence regardless of what actor takes any particular part” and the concept of the great men who “leap far ahead of their times, forcing thought along genuinely new and creative paths.”

The Babylonians commenced the study of astronomy not merely for religious forecasting—the celestial bodies were regarded as gods, but because within their empire there were many different calendar systems based upon the sun or the moon and “commercial and official business alike called for a more predictable and uniform calendar.” They collected observations over many centuries in order to improve their celestial forecasting, which they did with great accuracy, but apparently without any attempt to explain the sequence of the events they observed.

The Greeks were later to speculate on the causes of what the Babylonians had observed. Greece before 300 B.C. was unlike Babylonia in that it was not an area of order and stability, and it was “a meeting point for different cultures.” This situation led to a minority, often unpopular, making critical speculation concerning nature, politics, religion, etc., a speculation which was to lead to theories, many of which contained ideas to be developed later in Western Europe.

The unification of Greece commenced the decline in the spread of science. The paths of mathematics and astronomy began to diverge, the study of physics declined—“By A.D. 200, astrology had recovered all the ground that it had ever lost, and had effectively displaced rational astrophysics.” The reasons were political, social, economic and religious. This decline had such an effect that the last questions of Ptolemy were the first to be asked by Copernicus some thirteen centuries later, that is after fifteen centuries of Christendom. The authors show that members of the church often critically analysed concepts of the heavens, despite the fact that dogma had to be accepted.

The authors give considerable evidence that the ideas of Copernicus, Galileo, Newton and many others were milestones in the developing understanding of the universe, but assert that their ideas were expected developments from previous knowledge, and arose out of the problems confronting students of astronomy and physics in their times.

Inability to find an adequate explanation of the universe long led men to think “that divine revelation alone could give certainty.” But in the eighteenth century men thought that Newton had revealed “true laws for good. His theories seemed certain, correct, final. Later logical doubts and perplexities began to arise.”

When men solve problems it will often appear that their solutions are final. A problem has been removed, but neither nature nor society remain constant; new problems arise, the study of which extends man's knowledge.

According to the authors “the progress of science always involves a delicate balance between critical observation and speculative theorising — between careful piecemeal investigation of particular problems and imaginative general interpretation of the results obtained."

In capitalist society, in the fields of the natural sciences, it is possible to observe critically, to make speculative imaginative interpretations, but in the social sciences capitalist society, assuming itself to be correct and final, restricts scientific enquiry. Progress in social enquiry is prevented because the class nature of society and its consequences are ignored.

Freedom of enquiry in the natural sciences will continue under capitalist society, and astrophysics will not be an exception, for developments can usually be put to commercial advantage. Enquiry into the social and economic field will be encouraged only if it accepts capitalist society and aids commercial development, for example, market analysis or industrial psychology. Only Socialists can study problems of capitalist society uninhibited with ideas of its permanence. We alone are able to rebut the theories of capitalist social sciences—often from their own evidence. They stand condemned when comparison is made with the advances in the natural sciences in the past two hundred years, from canal to space travel, and yet in the social field the problems of poverty, insecurity, housing, etc., remain.

These problems arise out of the nature of capitalism and cannot be removed until society is changed. When that is done, and Socialism is established, the social sciences will be as free and unrestricted as are the natural sciences in their respective fields of study.