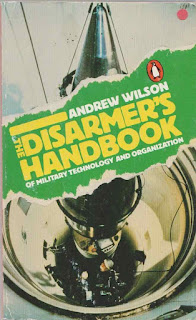 The NATO “dual track" decision of December 1979 to deploy ground launched cruise and Pershing II missiles in Europe as a political response to continued Russian deployment of SS-20s was soon followed by the British government's decision to replace Polaris with the Trident C-4 missile. This theatre nuclear force modernisation programme, coupled with strategic systems modernisation programmes in the United States, marked a disturbing escalation of the arms race. In addition, the Russian invasion of Afghanistan and the election of Ronald Reagan seemed to confirm the emergence of a new Cold War. These events forced many people to question their acceptance of the concept of nuclear "‘deterrence" — one being Andrew Wilson. Defence Correspondent of the Observer for sixteen years. The Disarmer’s Handbook of Military Technology and Organisation is the product of his change of heart.

The book may be divided into three sections; the first deals with theories of war; the second with military technology itself, including nuclear, conventional, chemical and biological warfare; and the latter part with efforts aimed at halting and reversing the arms race.

In the chapter on the theory and history of war there is an outline of the thinking of modern theoreticians such as Clausewitz, A.T. Mahan and Herman Kahn. It was Kahn in his book On Thermonuclear War, mentioned by Wilson, who outlined ways in which nuclear weapons could be used in crises or wars to effect tolerable outcomes. Kahn's book appeared in I960, but it was by no means the first articulation of a theory or doctrine for the use of nuclear weapons in war. US targeting plans of the 1940s. such as “Dropshot" formulated in 1949, called for the delivery of atomic weapons against Russian industrial and military centres. In referring to “counterforce", Wilson notes that it began in 1980, but qualifies this statement by referring to McNamara's “no cities" doctrine of the early 1960s in which it might be possible to limit damage to the US by concentrating nuclear strikes on military targets. But ''counterforce" targeting had always been a part of United States strategic doctrine.

Wilson devotes some space to Marx and Engels, especially the latter’s writings on military science. It was not for nothing that Engels was known to his contemporaries as "The General". It is, however, not true to say that Marx and Engels “turned to military science as a means of establishing the ‘revolutionary state’ after the failure of the barricades" (p. 23). Although in the 1840s Marx thought that a revolution could only result from violent insurrection, he and Engels had completely changed their view by the end of the century. For example, writing in the 1895 Introduction to Marx’s Class Struggles in France, Engels noted, "Let us have no illusions about it: a real victory of an insurrection over the military in street fighting, a victory as between two armies, is one of the rarest exceptions . . . even where the military are in the minority, the superiority of better equipment and training, of single leadership, of the planned employment of the military forces and of discipline makes itself felt"

The nuclear arms race has continued unabated since 1945, as has the conventional arms race the world over. In 1947 the US had only thirteen atomic bombs; the most recent estimate of world nuclear weapon stockpiles is 50,000 but since the nuclear arms race is more than just a numbers game, or what the Americans would call a "bean count", Wilson attempts to outline the qualitative differences between the American and Russian forces. For instance, the Russians lag behind he Americans in warhead miniaturisation and microelectronics. Intangible factors such as warhead accuracy and overall system reliability and performance are more important than mere quantity. The key to the whole system is the durability of command, control, communication and intelligence systems, which is a factor that Wilson does not really deal with at all.

It is not unusual to come across widely diverging estimates of weapons characteristics, or widely exaggerated estimates of weapon systems performance. For instance, data about Russian nuclear forces comes primarily from US intelligence estimates, hardly an impartial source. In Britain there has been no official announcement about the number of warheads on the new Chevaline warhead for the Polaris missiles. Andrew Wilson estimates that the number could be as high eight (p. 66). Other estimates have come up with numbers as low as two and as high as six.

The chapter on “Sick War — Chemical and Biological" makes clear that nuclear warfare is not the only form of potential mass murder. In describing chemical agents and their effects, such as the nerve gas Sarin and 2,4-D a defoliant, Wilson highlights the possibility of destroying not only people but whole ecological systems without any assistance from nuclear weapons — a factor which tends to be forgotten by the peace movement.

The Disarmer’s Handbook is aimed primarily at the resurgent peace movement. Although it provides a useful collection of technical details as well as notes on further reading, its conclusion is not one with which socialists agree. For example, in the Postscript Wilson writes:


Spontaneous demonstrations of popular feeling — in Central Park or Bonn or at Greenham Common — are one element, and an indispensable one, of the process needed to bring governments to action.

How this is supposed to square with the evidence in the preceding chapters, such as the failures of disarmament, the technological momentum which propels the arms race and the causes of war, is not made clear. The military hardware described in the book bears adequate testimony to the horrific society in which we all live, and that is the book's main achievement.