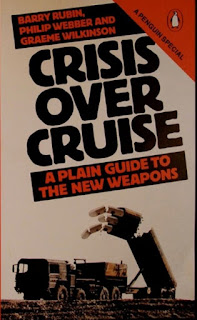 This study opens by pointing out that during the last 38 years there has been a steady increase in the size, diversity and sophistication of nuclear weapons and that no treaty has been able to arrest that growth. The world now has "the equivalent of over three tons of high explosive for every man. woman and child on the earth" (p. 10). The authors argue that the superpowers attempt to use propaganda in order to secure the tacit approval for nuclear weapons. The issue of cruise missiles has brought about a new fear of the implications of possessing such weapons and therefore thrust the whole question of nuclear arms into the arena of public debate.

The book argues that the development of cruise missiles marks the biggest escalation of the arms race since the development of multiple warheads on ballistic missiles. The major significance of the new missiles is their extreme accuracy and their positioning within Europe. The use of European sites for cruise missiles is also accompanied by the European siting of the new Pershing II ballistic missile. The accuracy of these weapons, according to the authors, is greater than that needed for a specifically deterrent role. At the same time the Russians have developed their most sophisticated missile yet, the SS 20, and have deployed it west of the Urals. These missiles could strike at any part of Western Europe.

The fact that cruise missiles will be under American control is, the authors say. "tantamount to relinquishing national sovereignty" (p.44) and they are keen that such sovereignty be maintained. They also argue that the new missiles are not required because Britain has its own force in Polaris. Polaris, they say, is deterrent enough and any new weapon will pose unacceptable risks of a limited nuclear war and its inevitable conclusion, full-scale nuclear war. The authors argue the case for unilateral disarmament because:


unilateral reductions in nuclear weapons would be a trust-building exercise which could only lead to greater mutual security, (p.54)

The current stance of the British government on nuclear weapons negotiations has two facets. On the one hand it claims to maintain an independent armoury in Polaris (to be replaced by Trident) while adopting Cruise as part of a NATO strategy. It is this, and the nature of the propaganda exercise undertaken by all governments, that hide the facts of the nuclear arms race. While accepting that nuclear arms represent an awesome threat to the future of humanity, it is difficult to draw much comfort from this book which never fully analyses the causes of war. Too much attention is paid to the notion that wars occur as a result of having weapons and manipulating propaganda rather than to economic considerations. The authors do recognise that each superpower is "engaged in a power struggle to maintain its spheres of influence and extend its own interests" (p.64) but do not grasp the implications of this fact. In arguing the case against nuclear weapons the authors even give some credence to the currently popular but facile belief that the retention of weapons and the use of them is primarily a masculine characteristic.

For the future the authors argue that countries should begin to reduce their nuclear arsenals. Given the tremendous overkill of weapons in existence this would not undermine the "deterrent” value of the weapons retained. They would like to sec an "immediate bilateral nuclear weapons freeze" (p.82) and the setting up of a UN agency to control and ensure treaty verification. They argue for a nuclear test ban and the establishment of “a battlefield-nuclear-weapon-free zone in Europe” (p.83). Should we understand the implication of this to be that non-nuclear battlefields are acceptable? They also argue for bans on the development of space weapons, the production of high grade fissionable nuclear material for weapons and a world wide ban on nuclear weapons research and development. It would be interesting to see how this treaty would solve the problems that have beaten previous treaties. In that sense the authors are only offering more radical treaties to the minor ones which have already failed to halt the arms race.


It is only towards the end of the book that the authors go beyond attempting to reform the problems that have occurred as a result of conflicting capitalist interests when they say that:

ultimate and lasting change can only come through radical changes in perspectives, perceptions and interactions of people on a very individual level which will occur hand in hand with the reorganisation of society and nations on a local and global scale (p.87)

How this is achieved is not discussed in any depth except in terms of changing consciousness. The authors also talk of the need for “revolutionary change" (p.88) but do not explain how such a revolutionary change is to be brought about. They also avoid suggesting on what basis that change will be made. It is not sufficient to talk about revolutionising society unless there is some perception as to how that revolution can be achieved and how the future society will be organised. It is for this reason that, while accepting that the book provides a useful factual description of the new weapons and a concise history of the development of the nuclear arsenal, it provides little in the way of practical advice on how to combat the threat of nuclear annihilation. Taking the issue of Cruise missiles as a reform programme leading to a revolutionary transformation of society is to limit the terms of reference in which a revolutionary programme can be considered. The arms race has occurred as a result of the conflicting interests of rival economic units. To focus attention solely on the nuclear issue is to detract attention from the real problem.
Philip Bentley