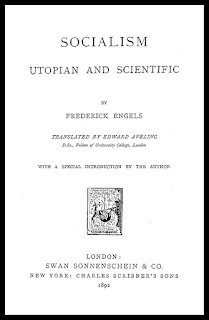 From the December 1983 issue of the Socialist Standard

With the seizing of the means of production by society, production of commodities is done away with, and, simultaneously, the mastery of the product over the producer. Anarchy in social production is replaced by systematic, definite organisation. The struggle for individual existence disappears. Then for the first time man, in a certain sense, is finally marked off from the rest of the animal kingdom, and emerges from mere animal conditions into really human ones. The whole sphere of the conditions of life which environ man and which have hitherto ruled man, now comes under the dominion and control of man. who for the first time becomes the real, conscious lord of Nature, because he has now become master of his own social organisation. The laws of his own social action, hitherto standing face to face with man as laws of Nature foreign to, and dominating him, will then be used with full understanding, and so mastered by him. Man’s own social organisation, hitherto confronting him as a necessity imposed by Nature and history, now becomes the result of his own free action. The extraneous objective forces that have hitherto governed history pass under the control of man himself. Only from that time will man himself, more and more consciously, make his own history — only from that time will the social causes set in movement by him have, in the main and in a constantly growing measure, the results intended by him. It is the ascent of man from the kingdom of necessity to the realm of freedom.

The above passage is taken from Socialism: Utopian and Scientific by Frederick Engels. It has a number of important points to make about socialism which this article will examine further.

1. Abolition of Commodity Production
Capitalist production is geared to creating wealth in the form of items for sale on the market with a view to profit. Wealth produced primarily for sale rather than use takes the form of commodities. A socialist society will do away with commodity production and will produce solely for use. This means that buying and selling will no longer take place and money will be obsolete. In a system based on free access to goods and services members of the community will not need to purchase from themselves the wealth which they already possess. Along with all other commodities, human labour power will be abolished as an item of sale: the abolition of the wages system will give way to a society of cooperative labour where each will give according to ability and take according to need.

2. Organisation, Not Anarchy
The capitalist system cannot be planned. The market gives rise to anarchy because its economic laws are based on speculation rather than the efficient measurement of social needs. Periodic crises are endemic to the profit system. In a socialist society, where the means of wealth production and distribution are owned and controlled by society as a whole, it will be possible to use the technology of mass communication to allow decisions to be made by the community about the best ways of satisfying human requirements. Of course, democracy will not always lead to the right answers and socialist society might occasionally suffer as a result of wrong decisions but, unlike capitalism, at least production and distribution will be regulated.

3. No More Individual Struggle for Existence
In the capitalist jungle people are forced to compete in order to survive. Worker is set against worker in the struggle for jobs and promotion and decent housing. Socialism is based on the recognition that the individual is not able to survive without society, and therefore the individual aims which capitalism conditions into us must be replaced by the understanding that only by co-operation with our fellow human beings can we exist in comfort. Unity is strength; in socialist society individuality will not be replaced by Maoist grey uniforms, but it will be understood that humans can only express themselves fully as social beings.

4. From Animal to Human Conditions
Unlike our older animal relations, human beings have the capacity to control the environment. Animals are, to a great extent, the inevitable victims of nature. Human beings have the unique ability to understand and change our conditions — to become "the conscious lord of Nature". Hundreds of years ago. when our forebears had yet to dominate their surroundings, they invented the myth of god which was supposed to be the prime mover of all things, natural, and social. These days there is the myth of "human nature", often used by anti-socialists to argue that social behaviour is fixed within the mould of capitalist social relations. Consciousness is the tool which makes it possible for humanity to master its social environment.

5. Making Our Own History
In the past most people have been pawns in the game of ruling class history. Socialism presents the possibility of making our own history in line with conscious plans. Planning does not mean that socialist society will determine its affairs in accordance with some master plan or blueprint. To plan on the basis of conscious thought is quite different from the undemocratic, centralised planning of capitalism. Of course, there is one other crucial difference between capitalist and socialist planning (or history-making): the capitalist planners are nearly always incapable of predicting what is going to happen to their system in the near or distant future; only in a society of conscious human control can it be meaningful to make decisions about the future.

6. From Necessity to Freedom
Capitalism sets up its own needs: it cannot avoid wars, unemployment, and mass starvation. Well-intentioned reformers want to see these symptoms of the capitalist disease — or, needs resulting from the power of capital — eliminated without ending capitalism. As the history of reformism has shown, this simply cannot be done. Only when we have removed the cause of these problems will they no longer be necessary. In "the realm of freedom” needs will be determined by the men and women (Engels refers to "man" but means both) who inhabit society.

If you read the Object of the Socialist Party, which is printed in every issue of the Socialist Standard so that nobody need be in any doubt about what we stand for, you will see that it is consistent with Engels’ vision. Clearly, socialism does not exist in countries like Russia. China, Cuba and Albania, where commodity production still exists, and where the features of socialism outlined by Engels are far from present. Socialism has never been tried, just as capitalism at one time was a system in the historical future. When a majority of workers want and understand socialism it will be established.