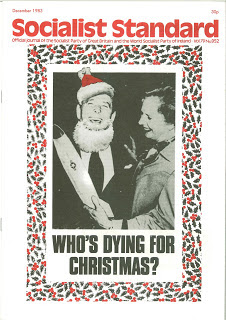 The Socialist Party is a revolutionary party, that is to say. it eschews any association with reformist elements or single issue policies; instead, placing first and foremost the revolutionary call for the abolition of capitalist society.

It is also committed to attain this objective through the democratic channels of Parliament and local government. But it hasn't, as far as I know, published any material discussing the working and implications of this strategy. Yet serious questions are at issue here; because. prima facie, the two stands are incompatible.

Capitalist institutions of government exist for the sole purpose of administering capitalist reality: that is their raison d'etre. They are also, by nature, policy-making chambers, i.e. forums where specific policies compete.

But the Socialist Party (rightly) has no policies. There is apparently no function that a revolutionary could perform in these bodies. What can s/he do? If s/he is to remain true to anti-reformist principles, s/he would be reduced to an anomaly — a mere cipher.

Or, taking a more adventurous hypothesis: say, where the Socialist Party gains control of a local council; how on earth is it to function if not by administering to the needs of capitalist society? The day-to-day business of local authority departments, dictated by capitalist Law and Bye-law must go on.

It would seem that a consistently held anti-reformist position is impractical and virtually impossible within the governmental institutions of capitalism.

I should be interested to know how the SPGB candidate at the last election envisaged his future role in concrete terms.
R Alderson
Manchester

Reply:
The question raised by R. Alderson is of great importance and has been dealt with in Socialist Party publications such as the pamphlet Questions of the Day. It is certainly true that the revolutionary transformation of society could not be achieved by a few isolated socialists stepping into capitalist institutions of government. They would, as R. Alderson rightly points out, be reduced to administering the very system of class division which they had set out to oppose. But the missing factor, which he has so far left out of account, is that of consciousness.

Once a majority of workers have come to reject capitalism in all its forms, the path will be clear for the establishment of the socialist alternative. Before the formation of the Socialist Party of Great Britain in 1904, there had been a division in the European labour movement between the “revolutionary" policy of minority insurrection (undemocratic coups) and reformism, using working-class representation to try to humanise the administration of capitalism. Neither of these options offered the possibility of genuine self-emancipation by the working-class majority.

The Socialist Party proposed that the profit system could only effectively be replaced by democratic production for use when a socialist consciousness allowed the working-class majority to democratically take control of and dismantle the capitalist machinery of government, without becoming at all involved in the running of capitalism.

Had the SPGB candidate this June been elected, he would have been able to use his seat as a platform for the wider propagation of socialist ideas. It seems highly unlikely, however, that one isolated seat, local council or indeed national, will be won over to socialism without similar success elsewhere. The developments in working-class consciousness across the world are remarkably uniform in pace, particularly as the progress of industrialisation continues to unite the world as (potentially) one productive area.

When there is a politically organised, conscious movement for socialism in a majority, it will be able to complete its democratic taking over of the state (the capitalist machinery of government). Where previously socialist delegates would have sat in the council chambers and parliaments as a vocal minority, they will then be able to form controlling majorities in such centres of social power. But socialist delegates are elected only under a strict mandate to abolish, rather than to administer, the capitalist system of society. Their presence as a majority in the parliaments and so on will be a reflection of a majority of the population having come to see socialism as a practical alternative, which they are ready to implement and to be responsible for running democratically. It only remains, then, for those delegates to fulfil their mandate of formally annulling all property titles, state and private, and ensuring the removal of the immediately redundant machinery of government. New, and far more democratic, channels of communication and control can then be introduced.

This use of electoral channels to complete the socialist revolution will have achieved two purposes. First, the demonstration beyond all doubt that there is a majority who reject capitalism and are prepared to organise socialism as a workable alternative. Second, the disarming of the capitalist class, who otherwise may attempt to prevent a majority from dispossessing them of the means of wealth production, by retaining control of the machinery of government. But first we face the urgent task of encouraging and accelerating the spread of a revolutionary socialist consciousness among wage and salary-earners, on which this whole process depends. We would urge R. Alderson and all other workers to join us in this great challenge of bringing society under conscious and democratic human control.
Editors

We refer to your article in the September Socialist Standard “Vote For Yourself For A Change". We feel that the comments regarding religious practices: ". . .  they would be able freely to indulge in their primitive superstitions" were unnecessarily condescending, and could be seen as offensive to some readers, and we feel will do nothing to further the socialist cause.

Reply:
We described religious practices as “primitive superstitions" because that is what they are — attempts to explain away gaps in human knowledge through putting forward unsupported beliefs, which are rarely better than superstitions, in supernatural life. There is nothing of condescension in our attitude to this: we take religious ideas, as an enemy of working class interests, too seriously for that. We are sorry but we cannot apologise, if some readers are offended for, at a time when the theories which maintain capitalism are so firmly entrenched, the case for socialism often has that effect. That is no reason to compromise, which would in fact be certain to harm the cause of socialism. That can best be protected and advanced by stating our principles clearly and cogently.
Editors

I am not a member of any political party but I have recently been reading your monthly magazine and have found that I am drawn to what you have to say about society.

However in the declaration of principles I find no mention of the animal kingdom although it is also enslaved and by its labour produces wealth. There is also an antagonism of interests between the animal world and the capitalist system. I would like to think that when socialism comes about then it will mean the emancipation of all living species and that cruelty will give place to compassion and slavery to freedom.

I would be obliged if you would tell me what the view of the SPGB is on the exploitation of animals for food, clothing, cosmetics services and in experiments.
Yours sincerely.
John Mitchell
Glasgow

Reply:
Under capitalism wealth is produced for sale and profit, which is the cause of. among many other undesirable things, the ruthless treatment of animals in the production of food, in the cosmetics industry and in experiments with the object of testing drugs. The change which socialism will bring, to production for use will end that: the motive for production will be the welfare of human beings. However, people cannot be separated from their environment and in socialism a regard for human interests will obviously entail a cherishing of animals and what is called wildlife. That is not to say that socialism will be a world of sentimentals; as human interests require it animals will be used for food and, if such were necessary, in experiments with the object of saving human lives.
Editors

Not sure the letter under the title of 'Animal Liberation' would be answered in the same way today. I might be wrong.