From the Socialist blog, Mailstrom:

"April the 17th 1888 Joseph Dietzgen died . In memory , I post this article written by Adam Buick for the journal Radical Philosophy 10. Spring 1975." 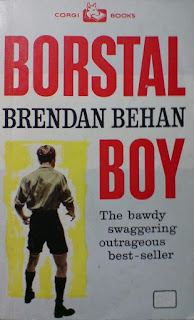 Book Review from the December 1958 issue of the Socialist Standard

Brendan Behan at the age of sixteen came from Dublin to Liverpool with an I.R.A. "do it yourself Kit." for the purpose of blowing up Cammell Lairds. He was arrested, and after a stay in Walton Detention Prison, Liverpool, was sent for three years to a Borstal Institution in East Anglia. The book (published by Hutchinson) tells of his experiences in these places.

He speaks of the filth and brutality which existed at Walton Prison, and there is no reason to disbelieve it. Life in Borstal, however, was much different. In fact, it smacks of Tom Brown's Schooldays and the Gem and Magnet. Chaps played the game - the Borstal game - apart from the occasional cad, house masters and house captains were sports. There were escapades, larkies and some horseplay. In fact, Behan and Co. at Borstal looks rather like Harry Wharton and Co., at Greyfriars. The youthful I.R.A. terrorist even assumed a Borstal school tie attitude, and he said his chinas came to regard the college boys they met via the Rugby field as being something of bounders. Behan also considered that he had a more cultivated and educated mind than the college products.

One of the defects of the book is that the conversation is so loaded or over-loaded with barrack room lingo that it fails to trigger off effectively. In fact, the constant repetition of stereotyped swear words takes on the chant of a litany. If one wants to substitute the soporific effect of counting imaginary sheep-jumping over a stile, then counting the swear-words which appear at such regular and monotonous intervals in the book will prove just effective. One feels that the author exploits the swearing gimick in an attempt to impart a vitality and excitement to the conversation which it often lacks. In any case, bad language is not necessarily a criterion of bad boys, even "good boys" often indulge in it.

Behan himself outswears the wide boys, the screws, toughies and ponces. But surely if one is describing a drug addict one does not have to take dope for the purpose of so doing. He seems naive enough to believe that "wicked words" are the hall mark of masculinity, especially his masculinity, when more often than not they are a bawdy blanket to cover a paucity of effective expression.

In spite of all the tumult and violence of the book, it has a monastic quality in that nothing of any significance from the outside world ever seeps in. Not even the war which was going on at the time is mentioned, in fact, the author never seems to have really noticed it. There is no serious discussion, not even about Ireland. Behan indulges in rodomantade about Irish politics, religion and history, but never indicates that he has any grasp of the underlying economic and political factors of Irish history.

Behan might say that he takes the world as he finds it. But what he finds in it is precious little, although he is often a little precious about it. His characters might be incorrigible and by certain standards a little impossible, but it seems vide the author that they live in the best of all possible worlds. He sees nothing wrong with the world and his only "revolutionary" aim, it seems, to use his own words, is to become a rich red.

Behan at least went to Borstal wearing a slightly glamourised would-be Martyr's crown. He came out none the worse, perhaps even a little better for it. But what of the mal-adjusted, the misfits and the unfortunates; what happened to them? That, perhaps, is the most disquieting thing of all, but Behan never mentions it.

He has nothing to say against patriotism or nationalism either of the English, Irish or any other variety. He seems to regard many Englishmen as stiff-necked and arrogant, but sees no reason why they should not be either in their native country or to people who come from other countries. But in a world of conflicting national interests, being pro Irish, English or American, means even at the best of times being negatively anti-something else. In the worse times such feelings take on an active and hostile form.

Behan's book is of a piece with Behan himself, bumptious, bouncing and bawdy, with a hint of hindsight and flashes of poetry. It is genuinely funny in places, but suffers from repetition. Behan at least has a sense of bubbling humour which pops and fizzes in all sorts of unexpected places and is a refreshing contrast to the "look back in anger," chip on the shoulder, the world owes me a living, writers who have set a literary fashion.

He has himself become rather fashionable, but literary fashions, like women's fashions, change quickly, and unless his future output is more significant than his past and present ones, Behan might easily become an has Behan.

Next Sunday in France

Next Sunday people in France will be voting in the first round of the French presidential elections. They will have a choice of 12 candidates, including one from the so-called Socialist Party, another from the so-called Communist Party, three Trotskyists and an "anti-capitalist".

We are often asked why all those calling themselves socialist don't just get together. The programme of the Trotskyist candidates in these elections provides one answer. When we contest elections, we campaign only for socialism as a worldwide system of society, without frontiers, based on the common ownership and democratic control of productive resources, with produced solely for use not for profit. When the Trotskyists contest elections, they hardly ever mention even their (mistaken) conception of socialism (which in reality is state capitalism). They assume that capitalism will continue and offer only reforms to it, thus contributing to the illusion that capitalism could be made to work in the interest of the majority class of wage and salary workers.

A case in point is Lutte Ouvriere, the premier Trotskyist organisation in France. Here's how they describe their candidate's programme in the latest issue of their French-language theoretical journal Lutte de classe:

"The three major problems for the popular classes are the persistence of unemployment at an unacceptable level, the continual decline of the purchasing power of the toiling classes and the catastrophic state of housing for the people. These necessitate an urgent solution. This urgent solution requires a different use of the high profits realised by enterprises over many years. It is from these profits as well as from the hand-outs given to enterprises by the State at a loss that must be taken the funds needed to finance the maintaining of employment in the private sector and to create new ones, useful to the population, in the public sector".

In other words, capitalism, including a private sector, is to continue and there is a "solution", even an "urgent" one, within it: to use the profits of capitalist enterprises to create new jobs and build new and better houses. This is just demagogy as there is no solution to unemployment and bad housing under capitalism, as the experience of capitalism shows let alone a knowledge of Marx's analysis of how capitalism works.

But it gets worse. The naughty capitalists have, apparently, not been using their profits properly:

"The unprecedented profits accumulated by enterprises are not used for real investments, i.e. for the building of new factories, the manufacture of new machines, the enlargement of productive capacities with jobs as a consequence. That's the essential reason for the present economic crisis. Instead of enlarging the basis of production, the accumulated money is more and more financialised and only used for those false investments that are the take-over of enterprises by each other. Unable to enlarge the market with a sufficient rate of profit, the main aim of enterprises is to dispute with others their share of the market. The competition between them to outbid each other sustains a speculative spiral which, in addition, threatens the economy with a new stock exchange or monetary crisis".

There's a solution to this too:

"The only way to stop this rush towards the abyss is for the popular classes, the population, to impose their control over enterprises, over the choices made by their managements. The population must be able to exercise control over the enterprises day by day, over their finances, their strategies, their choices, their short and long term projects, so as to be able to oppose projects which manifestly go against the interests of society".

We don't know if they really believe that all that is needed to get enterprises to produce in "the interests of society" rather than for profit is popular control over their investment decisions, but that's what they say, so giving the impression that this would be possible under capitalism. That capitalism could be reformed in this way is of course just another reformist illusion.

We suspect we know what they are going to reply in response to this criticism: that these promises are only a "transitional programme" designed to lead workers, who can't understand the "abstract" idea of socialism, to realise through the experience of the failure of these reformist measures the need to get rid of capitalism (actually, to establish state capitalism as in Russia under Lenin and Trotsky).

In other words, there's a subtle theory for the "vanguard" and demagogic reformist promises for the thicko "masses".

We say that workers in France who want socialism can show this by dropping a paper marked "SOCIALISME MONDIAL" into the ballot box.