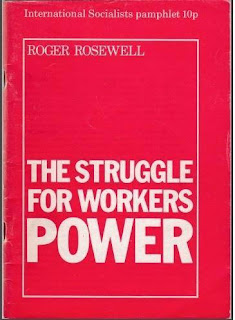 Pamphlet Review from the March 1974 issue of the Socialist Standard

The policies of the “International Socialists” have been set forth in a pamphlet, The Struggle for Workers' Power by Roger Rosewell. The pamphlet appears to be intended for the information of members of I.S., as well as for the general public.

The Labour Party, I.S. recognize Labour to be a non-Socialist party, and indeed provide ample evidence to show it. But they nevertheless support the election of a Labour government — in order to point to the anti-working-class nature of its policies. Those dim workers, you see, have to be led through this experience. This is itself a non-Socialist standpoint: since all previous Labour governments have shown that their function is to administer capitalism in the interests of the capitalist class, it is a waste of time encouraging workers to vote Labour only to shout “betrayal” when the results of doing so become apparent.

Now, at present the majority of workers support capitalism in one form or another, and presumably after the I.S. “revolution” many will continue to do so. What will the “Workers’ State” do with them? Perhaps, following their masters Lenin and Trotsky, such workers as oppose the new régime will be thrown into forced-labour camps.

A “Workers’ Militia” is to be formed for the protection of the new State and all workers are to be given part-time military training (in other words, conscription). Will workers carry rifles on their backs as they travel to and from work? The Workers’ Militia will defend the “right” to work (why not the right to leisure?) and the “right” to strike. Rosewell has already told us that under the new régime the means of production will be owned by the working class, so against whom would strikes be directed? We can only wonder, as no answer is forthcoming in the pamphlet.

All remaining British Colonies are to be declared free. “Free” is used without any explanation as to what is meant by it. Free from British imperialism, but in the clutches of, e.g., Russian or Chinese imperialism? Most likely, because Rosewell naively states that British capitalism’s overseas property will be handed over to the native workers.

The Communist Party. We are told that the CP was at one time a revolutionary organization, but sadly this is no longer the case. What is meant by this is that the CP advocated the violent overthrow of the Establishment (to be replaced by State capitalism on the Russian model, though Rosewell does not say this). Nowadays the CP advocates a peaceful road to "Socialism” (again State capitalism): I.S. claims that this is a departure from Marxism, and that Socialism can be established only after a violent revolution. For I.S. to claim that Marx never thought Socialism could be established by peaceful means is either very ignorant or very dishonest. Speaking to the Congress of the First International at The Hague in 1872, Marx expressed the view that in countries such as Britain and the USA where democracy had been established, the Socialist revolution could do without violence.

Reformism. This statement of policy boldly claims that I.S. is for “Revolution, Not Reformism” — then proceeds to advocate reforms: the repeal of the Industrial Relations Act, the repeal of the Housing Finance Act, reform of the education system with more money to be spent on education and the abolition of private schools, exams and corporal punishment. It even demands an end to-the teaching of ruling-class ideas. How naive can you get? Do I.S. seriously expect the ruling class to subsidize subversion of themselves?

I.S. participates in “the Fight against the Fascist Menace”. Readers of the-pamphlet should have been in Edinburgh on 15th October last, when I.S. (with others) broke up a debate at the University Union because they objected to the presence of the National Front. They are opposed to free speech for their opponents; apparently it is permissible for the Left to use “fascist” methods (breaking-up meetings) against fascism.

Socialism. The pamphlet’s summing-up says: “Mankind is faced with the alternatives of Socialism or barbarism. Only the Socialist revolution can change this.” We would certainly agree with that, but The Struggle for Workers’ Power does not point the way towards the new society. Claiming to be a Socialist pamphlet, it does not even hint at the nature of Socialism — a world-wide classless society, with an end to all markets and with production to satisfy human needs.
R. Battersby
Posted by Imposs1904 at 11:59 PM 1 comment: