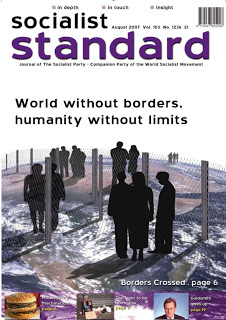 Does immigration cause working-class problems, or is rather that capitalism needs immigration?

It is all too easy to blame immigrants for causing or at least aggravating problems such as unemployment, bad housing or crime. Whether it is a matter of people from Eastern Europe or South Asia in Britain, or Hispanics in the United States, or Germans in Switzerland, a finger can always be pointed at 'them' for making things worse for 'us'. Socialists, however, prefer to take a wider view, to see processes like immigration as part of world capitalism and its historical development.

In the first place, there are many arguments in favour of immigration made by supporters of capitalism. Workers are more productive in developed than in so-called developing countries, so migrants can produce more in the UK or US than in (say) Mexico or Indonesia, causing the global economy to expand. It tends to be the younger, brighter, more adventurous who migrate, and they are prepared to do the 3D jobs (dirty, difficult, dangerous) that other workers are reluctant to take on — in transport or the hotel industry, for instance. Migrants send remittances to their families back home, thus boosting the local standard of living, and (unlike much official aid) such remittances genuinely go to workers and peasants rather than to bureaucrats or corrupt dictators. Population in the country that migrants go to is kept up by younger migrants, so avoiding the supposed problem of disproportionately many elderly. Allegedly, then, everybody benefits from migration, and free movement is moreover a basic 'human right'. Some writers would compare restrictions on migration to apartheid in South Africa, one of the cornerstones of which was strict laws about where black people could live and work.

Arguments along these lines are found in books such as Philippe Legrain's Immigrants: Your Country Needs Them — which should really be called Immigrants: Capitalism Needs Them. For that is what is really being claimed. Migrants provide capitalists with a supply of cheap, flexible labour, which they have not had to pay to educate, into the bargain. Even before capitalism, there were labour shortages, solved by immigration — the period after the Black Death in the fourteenth century is an example. But capitalism, with its insatiable appetite for labour power, is the true era of increased demand. Acute shortage of workers after the Second World War led to the importation of workers from the West Indies. During the oil boom in the Gulf, large numbers of cheap labourers migrated, including nearly five million to Saudi Arabia. Lebanon, too, has many immigrant workers from Syria, who perform much of the unskilled labour. In Scotland many employers are concerned that the country's population has fallen below five million, and look to immigrants to make up the shortfall. This year, British farms have lost large parts of their strawberry crop, because there are not enough immigrant workers prepared to come and pick the fruit, which highlights the fact that capitalism sometimes needs immigrant workers to keep profits up.

Rival capitalists, however, take different views on the usefulness or otherwise of immigrant labour. In the US, Bush recently attempted to set up a formal guest worker system. 'Illegal' immigrants currently there would have been allowed to apply for citizenship, at a price of course. But the Senate defeated the bill, preferring to maintain border security. One employer who supported the reform commented that its opponents were 'destroying the economy to save the US border' (BBC News Online, 29 June).

Over the centuries many different peoples have migrated to the British Isles, from Vikings to Italians, Jews to Africans. In both World Wars the British Army contained many troops from overseas (almost a third in the Great War). Many cherished British institutions were developed by migrants — not just Marks and Spencer but Moss Bros, Burton's, ICI and meals on wheels. Even the figureheads at the top of the tree are migrants: the royal family was French after the Norman Conquest, and later German. Queen Victoria, often seen as one of the greatest British monarchs, had almost all German ancestors, and she and Prince Albert spoke German to each other.

As such examples might suggest, movement across national frontiers was once less encumbered than it is now. The Aliens Act of 1905 and the imposition of passports during the First World War led to all the paraphernalia of visas, border controls, illegal immigration and so on. Immigrant ships could now be turned back, and customs officers could refuse entry to those deemed unable to support themselves. But the whole border and migration system is very expensive to maintain, another reason why many capitalists dislike it. In 1999, for instance, the Immigration and Naturalization Sevice in the US had a budget of over $4 billion, mostly spent on the border with Mexico.

It is often objected that migrants move from one country to another in order to claim benefits and live off the backs of 'indigenous' people. But there is no reason to think this is true in the vast majority of cases. Benefits are low, and most migrants are not entitled to them anyway. The migration journey can be expensive and hard, often indeed fatal, with many dying at sea on leaky boats or while trying to cross a frontier. Migrants are rarely well off in the country they move to, forming an underclass with little if any security of employment or housing. A committee of the British parliament described official attitudes to migrants and paying benefits to them as 'a deliberate policy of destitution', a rare example of straight talking from such a body.

Margaret Thatcher famously talked of people afraid of being 'swamped' by immigrants, a refrain taken up by the British National Party and MigrationWatch. The latter want strict limits on numbers of migrants, while the BNP want to stop immigration to the UK completely and start a programme of 'voluntary' resettlement. Even workers who do not support such ideas may still blame migrants as convenient scapegoats. This is often based on totally wrong ideas, such as that the proportion of immigrants in the British population is far higher than its true figure of four percent, or that asylum-seekers receive much more in benefits than the measly sum they actually get.

The Socialist response to all this is simply to point out that poverty and social disruption are caused by capitalism, a social system which requires the vast majority of the population to rely on selling their labour power to survive. With or without immigration there will be unemployment, homelessness, crime. Migration is the other side of globalisation, the massive increase in the interdependence of various parts of the planet. Investment is directed overseas, as capitalists look for the biggest profit they can extract and build factories or sweatshops in China, Thailand, and so on. But at the same time some jobs have to be done in the developed world — foodstuffs can be grown half way around the world, but the cooks, waiters and dishwashers have to work in restaurants in London or Manchester.

Equally, talk about migration undermining indigenous culture is so much hogwash. A nation is not something natural but an artificial idea that has been constructed over the centuries, based on accidents of geography and history. From fish and chips to curry and pizza, food in Britain is a mixture just as much as the inhabitants of these islands are. Globalisation may be leading to a unitary world culture, but Starbucks and American television are more responsible for this than migration.

"Open borders" is a capitalist slogan, not one that Socialists endorse. Socialism will be a world without borders and with no concept of migration, where we will all be at home anywhere.