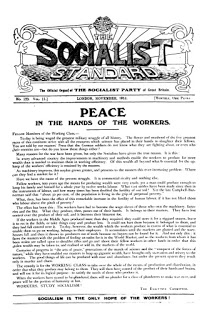 From the November 1914 issue of the Socialist Standard


Fellow Workers — During the last three months there has been staring at you from every hoarding, from trams, 'buses, and stations, from vans, warehouse walls, and notice boards on churches, from the pages of the newspapers and every other available space, the statement that: "YOUR KING AND COUNTRY NEED YOU."


This statement, showing, if you will but think, how important and vitally necessary you are to the ruling class, has been re-iterated again and again, with innumerable variations, from countless pulpits and platforms up and down the country. Urgent appeals by the hundred thousand have been made to all " fit" men to enlist; every device and every weapon that the "liberty-loving" masters could invent, from the call of a sham patriotism to the wholesale backing of employers; from lying to bribery; from silent coercion to the insults of the white feather brigade, and from this to the deliberate suppression of hostile opinion, have been used either to entice or drive you into the ranks. For you, fellow workers, are today, as you always are, indispensable to the bosses, both for the production of profits in the "piping times of peace" (!) and for cannon fodder and the slaughter of the "enemy" in times of war.


Without you the masters are helpless; without you the State collapses and the rulers of the one country cannot hope to win in their struggle against the rulers of another country; and knowing this, and recognising YOUR supreme importance, the bosses have been moving heaven and earth, spending money like water, lying like Christians, combining cajolery with economic pressure, and ringing the changes on every form of cant, from "stirring" appeals to your manhood to virulent denunciation of your indifference or backwardness, in order to make YOU go and fight battles from which you will receive the usual rewards of empty honour, broken health, wounded bodies, or the eternal silence of the grave.


The reasons advanced why you and the working men of Europe should fight each other have been many, and we could fill a column with the contradictions of the politicians, the black coats, and the "intellectuals" on this matter. Any excuse has been good enough as long as it has had the effect of making you and the German working men defend your respective masters. From the violation of treaties by Germany to deliberate provocation on the part of England; from Russian court intrigue to the capture of international trade; from the rottenness of secret diplomacy to the enthronement of Atheism; from the policy of "blood and iron" to the jealousy and hatred of the Allies: each and every excuse in its turn, according to whether the apologist was pro-British or pro-German, has been offered as justification for the infamy now going on, and as a reason why you should take part in it.


In England it is declared to be a war for "liberty, righteousness, democracy," and other bunkumalthough the bosses occasionally give the game away by stating, as the "Sunday Chronicle" of August 30th, that "the men in the trenches are fighting on behalf of the manufacturer, the millowner, and the shopkeeper." In Germany it is declared to be a conflict in which the ruling class of England, Russia, and Japan have combined to reduce her to the level of a fifth-rate power, and to render her politically, militarily, and above all economically, impotent for ever. And each aide, using every possible device, has dragged you and your fellow-workers abroad into the arena.


You had neither lot, voice, nor counsel in the events leading to the conflict; YOUR place while it lasts is that of automata, conscious only to obey blindly and, if need be, to suffer; and your lot after it is over will be the usual lot of your class, the lot of the poor, the down-trodden and the oppressed everywhere.


Of the forces now engaged not more than five per cent come from the ranks of the well-to do; YOU furnish the remaining ninety-five per cent. YOU have to bear the infinitely greater proportion of the deaths, the disease, the permanent injury and the awful strain, while those who goad you on with sweet words or threats, rest securely and comfortably in their easy chairs in club or office, killing the enemy every day with their mouths, but taking particular care, in the vast majority of instances, never to risk their precious carcases within a hundred miles of the actual conflict.


We Socialists would therefore ask you to put on your considering caps and think for yourselves, instead of allowing the capitalist Press, Tory, Liberal, and sham Labour, to think for you.


When the war is over, and you are tramping the country, as you will be in many cases; when you and those near and dear to you hunger and thirst; when you feel the whip of semi-starvation and the gaunt spectre of want is your daily companion, will your "King and Country" need you then? Does not your daily experience teach you that you have no country, that you are landless and propertyless? Does it not show you that here, as in Germany, the land and its fatness belong to the masters, your portion being a mean tenement in a mean street, with the bare means of existence, and then only if you are lucky enough to get work?


When the bosses ask you to fightto offer your lives for "democracy and liberty against militarism"; when they pose as the defenders of oppressed people, and express themselves deeply concerned to uphold justice, humanity, and right, ask them why it is that they have so long practised in Englandpractise to this day the tyranny and oppression they now denounce abroad.


The present British Government, the "champions of liberty," through their then Home Secretary, Churchill, prepared, previous to the railway workers going on strike, and turned out at the request of the railway magnates, no less than 58,000 troops, crushing by militarism the attempt of those workers to slightly improve their admittedly rotten conditions of existence.


This Government, "the apostle of humanity," during the last London Dock strikewhen the men merely asked that agreements previously entered into by the Government itself should be honouredplaced at the disposal of the capitalist Devonport and the gang around him, an unlimited supply of police and military, and deliberately starved the women and children, in some cases to death, in order to break the resistance of the men.


This Government, the "defender of freedom, the upholder of justice, and right," endorsed martial law, the denial of all liberty and the firing on defenceless crowds in S. Africa; it batoned 700 men in Dublin, turned out the military against YOU at Belfast, Llanelly, Leith, the Rhondda valley and elsewhere; it has callously refused to give underfed children sufficient food; it mocks with pretty words, but cynical, brutal inaction, the condition of the ever-growing army of unemployed; it has sanctioned wholesale imprisonment, exile and butchery, in India, Persia, Egypt, and the New Hebrides, and allied itself with the infamies perpetrated in Russia and Japan: in a word, it reeks with lying pretence and self-satisfied Pharisaism, for in very truth, it is the ever-willing tool of autocracy. Capitalism, and class rule and the deadly enemy of the working class everywhere.


Ask this or any capitalistic Government for their credentials, examine their records, and you will learn that, beyond all dispute, whether it be England or Russia, France or Belgium, Germany or Japan, there is, so far
as YOU are concerned, no difference between them whatever. They are all made in the same mould, filled with the same lust the lust of exploiting YOU. When it suits them they flatter you; but when you ask them for a little of the justice they now prate about, then they insult, imprison and often murder you. To-day they want you badly, for they are at war with each other and want YOU to do THEIR dirty work; but remember that whoever wins or loses, your lot will be the same; the politician will still soft-soap you ; the industrial machine will still grind you, and poverty and all that it means will still enchain you.


If, therefore, you are wise, if you are men, if you are really anxious for freedom from slavery, then look around you here, and you will soon learn the truth, that it is your class which is denied this freedom, and denied it by the very class who now call upon you to act. One law for the rich and one for the poor. Adulation, servility and the world's wealth for the rich; grinding toil, insecurity and eternal hardship for the poorthese are the commonplace of every day life. Is it not so?


Your duty, then, is to fight against this, and the only way you can fight successfully is by understanding your position in society, realising that wars and hate, malice and theft, oppression and greed, class rule and the travail of the workers the world over, are to-day born of capitalism. This it the root evil; it is this you have to war against if you would be free, for all else is futile; and when you do this, BUT NOT BEFORE, then liberty will be with you as your possession; there will be no oppressed peoples, for the might of the working class, organised consciously for the overthrow of the modern octopus, will have conquered, and the international commonwealth will be here.