"Go Red for China!" was the slogan unveiled on the Chinese mainland by Pepsi-Cola, whose ubiquitous blue can will, "for a limited time," be red. Pepsi is just one of many companies advertising at the Olympics, at a cost of up to $6 billion, in an attempt to tap a largely untouched market of more than 1 billion. "You've never seen the Olympics in a market that has such domestic commercial scale," Michael Wood, chief executive for greater China at advertising firm Leo Burnett, told the New York Times. "When the Olympics were in Los Angeles and Atlanta, the U.S. market was already fully developed."

This is the Olympics the West wanted: games where the grandest prize is not a gold medal but a glittering entree to China's seemingly endless army of potential consumers. This is the reason that George W. Bush will attend the opening ceremonies, the first U.S. President to do so on foreign soil, and that in March, mere days before the crackdown in Tibet, Condoleezza Rice, laughably, took China off the State Department's list of nations that abuse human rights.

But if the stakes are high for Western capitalism, for China they may well be higher. Beijing has spent as much as $40 billion to build train stations and Olympic facilities, uprooting more than 1.5 million residents, all in the hope that the games would mark, as the official Xinhua news agency put it, a "historical event in the great renaissance of the Chinese nation." 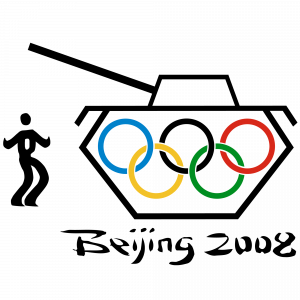 National renaissance, however, may be giving way to revolt, both internally and from the athletes themselves. The buzz in the lead-up to 8/8/08 is not merely in Beijing. It's in Hunan, Shanghai, Guizhou and earthquake-devastated Sichuan, which have all recently seen mass demonstrations against Communist Party rulers. Provincial authorities are now under extraordinary pressure to crack down on protests. Instructions from Beijing are to "go on a war footing" to head off further upheaval before the games.

The steady percolation of the conflict at home has been matched -- or even exceeded -- by international anger. Athletes, activists and globe-trotting protesters are poised to raise a panoply of issues, including China's crackdown on Tibet, its support for the Sudanese regime and environmental concerns. The Communist Party has been forced to respond to this pressure cooker by opening a steam valve, announcing on July 24 that public protests will be permitted during the games inside three designated city parks. But as the (New York) Times reported, "Demonstrators must first obtain permits from local police and also abide by Chinese laws that usually make it nearly impossible to legally picket over politically charged issues."

If Chinese leaders believe that will release enough steam for a smooth games, they could be in for a surprise. Olympic protest may extend beyond the parks. More than 200 athletes from "Team Darfur" may be wearing bracelets and speaking out against human rights abuses. As Jessica Mendoza of the U.S. softball team told the St. Louis Post-Dispatch, "I don't think it's my place to tell China what to do. But I do think it's my place to tell people what is happening. I want people to know that nearly 400,000 people have been killed in Darfur since 2004." Athletes are also angry that the air quality in what Beijing is calling the "green Olympics" could be hazardous to their health.

A public relations catastrophe could be in the making if dissenters manage to break through the media blockade that runs from Beijing's troubling record on press freedom to NBC's soft news coverage. It should not be China's to bear alone; it should be shared by the Western nations and corporations that got the games they wanted.

Also be sure to check out the Socialist Standard's review of Dave Zirin's What’s My Name, Fool? Sports and Resistance in the United States

One victim of the credit crunch is the theory that banks can create new purchasing power which didn’t exist before, i.e., can “create” credit. While the writers of economics textbooks show mathematically how in theory the banking system as a whole could on certain unrealistic assumptions turn an initial deposit of £1 into £9 or even £99 (and while currency cranks get hold of the wrong end of the stick and that an individual bank can do this), practioners and journalists who observe them know this not to be the case. They know that banks can only lend out money that has been deposited with them or which they themselves have borrowed or their own capital.

First, a practioner, Bill Browder, chief executive of Hermitage Capital Management, a hedge fund (and, incidentally, grandson of Earl Browder, one-time General Secretary of the American Communist Party who lost his job in 1946 when Moscow zagged and he went on zigging):

“The banking system is the financial circulating circulation system. If the circulating system doesn’t work, the patient dies” (interview with the (London) Times 4 August).

Precisely. Banks and other financial institutions involved in lending are in the business of circulating, not creating, money and capital. Ideally from a capitalist point of view, they circulate money from where it is not being used to where it can be applied the most profitably. As Browder points out, the credit crunch represents a clogging up of this circulation of money and capital which, if it continues, could have widespread repercussions on the real world of production.

Now, the financial journalist, Anatole Kaletsky of the (London) Times:

“. . . the whole point of a bank is to exchange short-term, liquid, fixed-value liabilities for long-term, illiquid assets whose value is hard to guage - this liquidity and maturity transformation is, in fact, the main social function that a banking system provides” (14 July).

In other words, banks borrow short to lend long. Borrow ready cash (either from depositors or, these days, from short-term money markets) at one rate of interest to lend to capitalist firms in the hope of earning a higher rate of interest (it has to be added that, these days, banks also engage in speculation on currency and other markets in the hope of making a capital gain bigger than what they have to pay to their depositors and creditors).

What has happened is that their speculation with a view to a capital gain has gone horribly wrong as they put money into bonds which they themselves describe as “toxic” because not all that credit-worthy. Which now nobody wants to hold, so their price has fallen. This means that, instead of making a capital gain they have suffered capital losses, but they still have obligations to their depositors and still have to pay interest on their short-term borrowings on the money market. But because inter-banking trading has slowed down – nobody wants to be left holding a parcel of toxic bonds – the interest rate on these borrowings have gone up.

The banks are reluctant to borrow as much as before from this source. Which means they have less to lend out. Hence the credit crunch. Of course if they really could conjure up money out of nothing then could never be a credit crunch.