Housing action groups have criticised the new law against squatting this week, saying that it would lead to more homeless people living on the street. But Justice Minister Crispin Blunt defended the law, pointing out that homelessness was at the lowest level for 28 years: ‘Two harsh winters have seen to that. Another big freeze this winter and there won’t be any park bench wino dossers left alive at all.’ He added that the government was spending £164m to bring 10,000 empty homes back into use: ‘Put bars on the windows and one-way locks on the doors and bingo, prison overcrowding also solved. Ker-ching.’

South African prosecutors have provisionally dropped murder charges against 270 miners whose colleagues were shot dead by police. The State Prosecutor admitted in a statement that it was patently absurd to shoot people and then charge their friends with causing their murder: ‘We’ll prosecute the dead miners for committing suicide instead. They don’t have a leg to stand on as they’re dead.’

Gottfrid Warg, one of the founders of the file-sharing website Pirate Bay, has been arrested in Phnom Penh after an international warrant was issued against him. The website immediately issued a press statement saying that this would not affect operations as there were already proxy copies of Warg on 78 mirror sites in six continents.

Hollywood actors, directors and scriptwriters went on the rampage last week, burning down a number of cinemas, phone booths and magazine stands in protest at the anti-Islamic film ‘Innocence of Muslims’. Speaking on behalf of the film industry, Steven Spielberg said: ‘Hollywood is united in deep disgust at this film, with its shoddy production values, acting, dubbing, backgrounds, plot and script. This is not the American way. If we decide to piss Muslims off we’ll do it with a hundred million budget and Mel Gibson.’

British newspapers rushed to condemn the publication by a French magazine of topless images of Kate Middleton as being a ‘grotesque and outrageous invasion of privacy’. The Daily Mail fulminated in a front page editorial: ‘We were offered those pictures too, but honesty, integrity and a profound respect for our wonderful Royals made us turn them down.’ A spokesman for the French magazine Closer retorted: ‘Bolleaux to the Anglais Press. They do not care about privacy and decency, they are merely shitting les briques a cause du Leveson Enquiry and are furieux that nous avons le scoop instead.’
Posted by Imposs1904 at 10:54 PM No comments:

Exhibition Review from the October 2012 issue of the Socialist Standard

The 180 photographs in the Another London exhibition are selected from the collection of 1,400 photographs of the Eric and Louise Franck London Collection. The 41 photographers in the exhibition were all from abroad, visiting London as tourists, or as part of their employment, or were refugees from Nazism and eventually settled permanently in Britain. The photographs are evidence of a rich tapestry of life in ‘The Smoke’ during the twentieth century.

‘Class’ is a significant factor portrayed in these photographs from Brandt’s Housewife – Bethnal Green 1937 and Suschitzky’s East End Street 1934 to the series of photographs of the working class in Brick Lane, Spitalfields 1976-78 by Luskacova.  People in the Knave of Clubs Pub, Club Row 1976 is revealing in its depiction of East Enders sense of camaraderie although at first glance the photograph could be from the 1930s. The various changes in capitalism in Britain in the intervening 40 years had done little to change the economic status of working class in the East End.

Photographers also captured the ruling class at work and play in Hoppe’s 1937 London Stock Exchange – Typical Young Businessman to the military in The Queen’s Guards 1960 by Erwitt. The photograph of the 1959 Queen Charlotte’s Ball by Cartier-Bresson is of the Débutante’s Ball where daughters of the Aristocracy ‘came out’ at the end of the ‘Season’. ‘Debs’ were presented to the Queen at Buckingham Palace right up to 1958 when it was deemed an archaic social practice. The ‘Debs Ball’ ended in 1997 but since 2009 has been re-established for the daughters of wealthy capitalists as well as the Aristocracy.

Erwitt’s photographs of British Railways Logo on Train and Male Passengers in 1st Class Compartment (1950’s) highlight the fact that although the railway was nationalised in 1948 BR still operated a ‘class system’ of compartments for first, second and third class passengers. Third Class was abolished in 1956, and second class was only re-designated as Standard Class in 1985.

There is an evocative photograph by Willy Ronis of Gaston Berlemont’s Pub, The French House, Soho 1955 which reeks of tobacco smoke, booze and bohemianism (well-known poets/artists and drinkers Dylan Thomas, Brendan Behan, Francis Bacon, and Malcolm Lowry frequented the hostelry). The iconic photograph of the Beat Girl with Kitten 1960 by Bruce Davidson conjures up the mysteries and delights of youth on the cusp of adventure at the beginning of the ‘swinging sixties’.

Neil Kenlock’s photographs of the Afro-Caribbean community illuminate a radical political side to the black British experience: Demo Brixton Library 1972 shows placards stating ‘All Police are Pigs’ and ‘Off the Pigs’ while the 1970 Black Panther School Bags portrays just that.

Davidson’s Conductress 1960 epitomises the period covered in the exhibition. This world of the sounds of ‘slam door’ trains, Solari departure boards at rail stations, Routemaster buses, and Gibson ticket machines is gone forever.
Steve Clayton
Posted by Imposs1904 at 10:36 PM No comments: 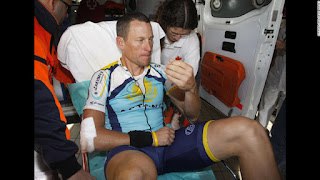 Lance Armstrong was never actually caught taking performance-enhancing drugs. Rather, the cyclist simply gave up fighting the allegations that he had done so. Regardless of the truth of the situation, this latest development is a reminder of the role of drug-taking in many sports.

There were plenty of earlier examples, but large-scale taking of drugs to improve performance probably goes back at least to WWII, when many soldiers took amphetamines and anabolic steroids to boost their alertness and aggression. It did not really become an issue in sport until 1967, when the International Olympic Committee began to ban drugs, though full-scale testing only started in 1972. In the former state capitalist countries of Eastern Europe, doping had become a kind of standard procedure.

Of course, you might well ask the question, what is wrong with doping? And how does it differ from following an appropriate diet, consuming energy drinks, using the very latest kit and clothing that are intended to make you run faster, and so on? The official answer is that, quite apart from wanting sport to look ‘clean’ for spectators, many drugs are dangerous. Cycling, which as an extreme endurance sport is particularly open to doping, has seen a number of deaths from taking erythropoietin, which increases the red blood cell count. Anabolic steroids can have side effects such as acne and impotence in men, and hair loss in women. Some Paralympic athletes actually give themselves electric shocks to boost their blood pressure. However, even legal gym supplements that boost your protein may lead to kidney damage.

As for why athletes risk their health and even their lives by taking drugs, the answer lies in the money and the fame, not to mention the pressure from coaches and national associations. There is an ongoing race between those who organise doping and those who devise new testing procedures, with neither side able or willing to stand still. The priorities of a system based on competition speak for themselves. And, as so often, human intelligence and ingenuity are put to ultimately pointless uses.
Paul Bennett
Posted by Imposs1904 at 10:11 PM No comments:

From the October 2012 issue of the Socialist Standard

The market system works. But not for us. It works for the handful of people who own industry or land. Most of them are doing well and getting richer. For them, the present system works, through our hard work.

For us, the workers, it doesn’t. The real value of wages has shrunk. Housing is becoming more unaffordable for many, rents are rising and benefits are being cut. Unemployment is at staggering proportions, especially among young people.

The truth is being revealed across the world: that the system is run in the interests of those who own it. For governments, repaying debts to those who got wealthy from our work is more important than us receiving education or health care.

For us, the future won’t work so long as we depend on an economy based on the market with the private or state ownership of the means of living.

In our workplaces we co-operate. We don’t charge our colleagues for our time: we work together. It’s just that we work together for our employers. If we owned the land and all the places of work ourselves, we could work together to make all the things we need, without buying and selling and without an employing class.

The alternative is voting for parties that support the market system: parties that inevitably have to accept the existence of poverty and unemployment.

While we build a movement to bring about a better future, it’s important that we use trade unions to defend ourselves and get the best deal we possibly can under the present system. We must ensure democratic control of trade unions, and not follow charlatans and adventurers to glorious defeat. We should rely on ourselves, not leaders.

If we want to transcend the defensive position forced upon us by the pressures of the profit system then a vision beyond capitalism has to be on the agenda.

That future we call Socialism, a future where we would have common and democratic ownership of the resources of the world. A future that will work if the majority of us want it and are prepared to work for it using democratic struggle to create a world of common wealth.

– leaflet for TUC demonstration in London on 20 October. For copies to distribute, write to the Socialist Party, 52 Clapham High Street, London SW4 7UN
Posted by Imposs1904 at 10:02 PM No comments:

Obituary from the October 2012 issue of the Socialist Standard

Manchester Branch are sorry to report the death in August of Comrade Cyril Brown, at the age of 79. Cyril was a latecomer to Socialism, having joined the Party in 2008. He was a regular attendee at Branch meetings, and we will miss his quiet, wise and always sensible counsel.