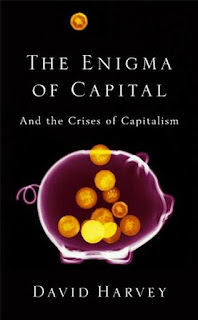 From the June 2010 issue of the Socialist Standard


We look at David’s Harvey’s latest book The Enigma of Capital.

We are living through the biggest capitalist crisis since the 1930s – a crisis with economic and ecological, not to mention social and political, dimensions. No one knows for sure what’s going to happen or what to do next. In this context, what we need as a matter of urgency is understanding. We need to know what the crisis is, why it has arisen, and what, if anything, can be done about it. David Harvey, an acclaimed geographer and professor of anthropology, points to some of the answers to these urgent questions.

The Enigma of Capital (Profile Books, 2010) opens with an account of the recent history of the economic crisis, from the first signs of trouble in the US ‘subprime’ mortgage market in 2006, right up to very nearly the present day. This account is in the style of and largely taken from the liberal and financial mainstream press. Harvey then moves on to analyse what is really going on behind this standard account. This is helpful because no economist or financial journalist has been of any use in predicting the crisis or explaining why it has happened. Harvey rejects the search for a scapegoat – Alan Greenspan, Gordon Brown, irresponsible borrowers, greedy bankers, and so on – and instead argues that crises are an inevitable and necessary feature of the normal working of capitalism.

His basic argument is a Marxian one. Modern societies are driven by the capitalists’ search for ever-more profit. Competition forces capitalists to reinvest at least a portion of that profit, again in the expectation of yet more profit. This leads to ‘capital accumulation’ on an ever-expanding scale, and this circulation process, much like the blood in the body, must keep flowing if profitable investment – and therefore the socially necessary production of goods and services – isn’t to have a scary heart attack. But as the years pass, certain scares are inevitable – and the problems get worse as the amount of capital searching for profitable reinvestment gets larger and larger.

Harvey’s analysis
Harvey identifies seven main risk factors: money capital scarcities (where’s all the money going to come from?), labour problems (e.g., insufficient supplies of cheap, ‘flexible’ labour), disproportionalities between sectors (one sector over-expands in its search for profits), natural limits (e.g., scarcities of natural resources), unbalanced technological and organisational changes (including competition and monopoly and so on), indiscipline in the labour process (workers slacking off or organising unions for example) and lack of effective demand (consumers’ ability to pay for goods and services). He argues that any one of these can be a clot in the free flow of capital. But capitalism cannot tolerate such clots for long without dying.

Like the human body, capitalism is a dynamic system that is very good at sorting out its own problems. It patches itself up, and gets going again – but always at the price of storing up future problems for itself. So, to take recent examples, a crisis of profitability in the 1970s led such figures as Thatcher and Reagan to dampen down wages by crushing unions, creating unemployment and importing cheaper immigrant labour from abroad. This was successful for a while, but created a new problem: a population of unemployed or badly paid workers does not make for the vibrant and ever-expanding consumer markets capital needs to prosper (there can be no growth without sales). This problem was solved by recklessly extending credit to ever more people, regardless of their ability to repay. This in turn led to a crisis of overindebtedness in the working class, which led to a crisis of confidence in debt instruments, starting with subprime mortgages in the US, which led us to where we are now – the supply of credit drying up, leading to blockages in the flow of capital, in turn leading to rising unemployment, the loss and devaluation of capital, and so on. The economic ‘stimulus’ measures (the defibrillator) haven’t worked, so now we are being promised Thatcher-style austerity (a fat-free diet) for the working class.

A crisis can be understood as those times when socially produced wealth returns to its ‘rightful owners’, the capitalist class, and as an opportunity for that class to consolidate its power over both the working class and the political machinery of the state (it was a commonplace in some sections of the financial press that, whoever won the general election, the government would be forced to do the bidding of ‘international investors’, i.e., the capitalist class). The capitalist class then uses that power to claw back as many as possible of the gains and reforms won by previous rounds of class struggle and political action. ‘Balance’ and health is restored to the operation of profitability, and the flow of capital can continue. Hence the necessity as well as inevitability of crisis under capitalism.

Leninist fly in the soup
So, what is to be done about all this? Harvey is right to insist that nothing less than what are usually dismissed as ‘utopian’ answers will do. The crisis is rooted in the system. Capitalist attempts to solve the crisis will mean more austerity and misery for everyone apart from the smallest minority. A systemic problem cries out for systemic solutions. In this, we agree with Harvey. True, the influence of Leninism in the book, especially in the final chapter, is something of a fly in the soup. Eating around the fly becomes increasingly distasteful as we get near the end of the meal – Harvey’s criticism of what he calls ‘actually existing communism’, i.e., the state-capitalist dictatorships in the former Soviet Union and so on, is mild to say the least, though at least he is good enough to confirm that what most people call ‘socialism’ is actually just “democratically managed or regulated capitalism”.

Genuine socialists with weak stomachs may baulk at this. But if so, they will miss out on some good, solid, political nutrition. Particularly interesting are three points of strong agreement between Harvey and us.

The first is the importance of what he calls ‘mental conceptions’ in revolutionary change, i.e., the importance of ideas and what is usually dismissed as ‘utopian’ politics. Without a change in what people think about the prospects for change and for socialism, as Harvey rightly points out, there can be no alternative other than a return to some form of capitalism.

The second is his insistence, somewhat against the fashion among other anti-capitalist theorists, on the importance of capturing and transforming the state. There is, he says, “no way that an anti-capitalist social order can be constructed without seizing state power, radically transforming it and reworking the constitutional and institutional framework that currently supports private property, the market system and endless capital accumulation. To ignore the state and the dynamics of the inter-state system is therefore a ridiculous idea for any anti-capitalist movement to accept”. We wholeheartedly agree.

The third is his insistence that the crisis does not mean that capitalism is ending. Capitalism is a dynamic system that has always solved its own problems in the past, and will do so again, whatever the cost to the rest of us – and the cost this time could well be environmental disaster, perhaps even catastrophic war. Capitalism will never fall on its own, says Harvey. It will have to be stopped and the power of the capitalist class ended by concerted political action. And although the prospects for such change do not seem that good at the moment, a crisis will at least tend to make the question of alternative social systems seem more relevant and urgent. In other words, good capitalists always view crises as opportunities. It would be wise if the people they rule over did the same.

There is plenty of room, then, for both agreement and disagreement in Harvey’s book. As a book, it is a bit of a loose, baggy monster – it is overlong and repetitive, loosely and sometimes vaguely written (things happen “big time”, without quantification or referencing), and seemingly hurriedly and lazily assembled from the professor’s lecture notes. His writing mostly seems aimed at a general audience, and yet technical terms and Marxian jargon go unexplained, and ideologically loaded and potentially confusing words and phrases are used without apology or caution. But most of these faults can and should be overlooked because the substance of his argument is sound and deserves as wide an audience as possible. In addition, his analysis of the importance of urbanisation and the ownership and control of land and resources in modern capitalism is an important modern updating of Marxian theory, expanding on some insightful and prescient comments by Marx in Capital.

Harvey also has an extremely useful model for thinking about how capitalism moves and changes, through the interconnected development of seven ‘spheres’ of activity, again derived from Marx, but avoiding the determinism and one-sidedness of many of Marx’s later followers. Harvey helps us understand, in relatively straight-forward English, what’s really going on behind the stories we read in the mainstream press, and therefore helps us think clearly about what it might be possible to do in the future. As Harvey says, “Questioning the future of capitalism itself as an adequate social system ought, therefore, to be in the forefront of current debate.”
Stuart Watkins
Posted by Imposs1904 at 11:25 AM 1 comment: