Capitalism will not be controlled (2011) 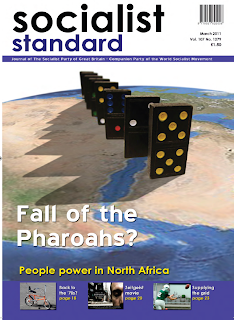 Gordon Brown will go down in history as a failure. Politically, as a prime minister who never won an election. Economically, as the man who arrogantly and pompously announced that his policies had led to the end of the boom/bust cycle, only to find himself a year or so later presiding over capitalism’s biggest slump since the 1930s.

Philip Collins commented on this claim in his column in the (London) Times on 7 January:


“Weirdly, the Labour Party appeared to have concluded that capitalism had become stable, ordered and pliant. They need to read their Marx again, They’ll find a picture of capitalism as creative, destructive, radical, disruptive and prone to cycles of boom and bust, even when commanded to behave by Labour chancellors.”

But had they ever read Marx in the first place? Not that the Labour Party has ever accepted Marx’s analysis of capitalism. They haven’t even used the word “capitalism” for years. A previous Labour Prime Minister, Harold Wilson, once famously declared that he had never got beyond a long footnote on page 2 of Capital.

Brown, on the other hand, as a leftwing student leader in his youth and as author of a book on the ILP leader Jimmy Maxton, would probably have read some Marx. As would his successor as chancellor, Alistair Darling, if he really was once a member of the International Marxist Group (though he might have therefore been more familiar with Lenin than Marx). The Miliband brothers would have heard of Marx and his ideas from their father and perhaps even read some.

Collins used to be a speechwriter for Blair but he doesn’t seem to have made Blair make this criticism of Brown. They, apparently, had other things to argue about. But his description of Marx’s view of capitalism is substantially correct.

If Harold Wilson had persisted he would have found (some 500 pages later) Marx’s description of the course of capital accumulation:


“The life of industry becomes a series of periods of moderate activity, prosperity, over-production, crisis and stagnation” (chapter 15, section 7).

In a boom the competitive struggle for profits leads to overproduction (in relation to its market) of one sector of the economy that then spreads to other sectors. Capital accumulation stalls. During the resulting slump the conditions are created (through lower wages, interest rates, and asset values and the elimination of unprofitable businesses) for a slow recovery and eventually another boom which, like the previous one, will eventually bust. And the cycle continues.

Brown’s Tory opponents forget that he wasn’t the first chancellor to have claimed to have ended the boom/bust cycle. Nigel Lawson, Thatcher’s chancellor from 1983 to 1989, also believed he had done so. David Smith, the economics editor of the Sunday Times, recounted in his 1991 book From Boom to Bust:


“Even before an economic miracle was being proclaimed in the late 1980s, the Conservative Party’s boosters had declared that Nigel Lawson had achieved something, without explicitly trying for it, that had eluded all previous post-war Chancellors. He had, it was said, abolished the business cycle, a boast that Lawson was happy to live with…” (p. 196). “…until,” Smith added, “it proved to be woefully misplaced,” when the recession of 1990-91 broke out.