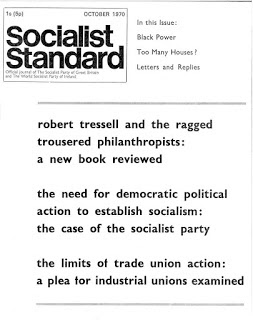 From the October 1970 issue of the Socialist Standard

During the general election Mr. Wilson said he was the lesser of the two evils (or the least of the three evils, as he later told Mr. Thorpe). Although this is no valid argument for voting Labour, Mr. Wilson was right on one point: neither Labour, nor the Tories, nor the Liberals are any good.

First let us recall just what were (to use Mr. Wilson's choice of terms) the “evils” of the present Labour government:


In view of this black record it is not at all surprising that Labour chose to fight the election on the negative plea that at least they were not as bad as the Tories. After all they could no longer claim to stand for the brotherhood of man. They could no longer pose as the party trade unionists should support. They could not even claim to be the party of mere anti-capitalist reform (they have long ceased even pretending to be a socialist party — which of course they never were). In words as well as deeds Labour was, and still is, clearly an ordinary capitalist party. It is Tweedledum to the Tories’ Tweedledee.

There is a good reason for this. The “lesser evil” argument is invalid because it assumes that what a government does depends on the good or bad intentions act, and their priorities, is the workings of the capitalist system. Capitalism is based on the concentration of wealth in the hands of a privileged few. Under it production is carried on for profit. The world is divided into a number of capitalist states (including Russia and China) all of which are competing against each other to sell their goods on the world market at a profit. How successful a state is in this is what of the leaders of the party in power. In fact what determines how governments limits its government’s actions. This is why it does not matter which party forms the government; in the end all governments are forced by economic circumstances to pursue basically similar policies. It is because the Labour Party accepts capitalism that it has become so unlike the Conservative Party.

Labour was forced to do the things we have listed, not because they are incompetent or insincere or weak-willed, but because they undertook to govern capitalism and capitalism is a class system that can only work for those who live off profits, and never for those who work for wages. Any party, as the present Labour government’s record confirms, which takes on the government of capitalism is bound to act against wage and salary earners.

From the October 1970 issue of the Socialist Standard

There has always been some confusion about what Malthus thought about the possibility of over-population, even in his lifetime. It arose partly because he used ambiguous phrases and partly because after the first edition of his book on population, he shifted his ground. By the time he reached the third edition his considered view was that overpopulation could never happen because it is always prevented. He wrote:

For undoubtedly, as long as this continues to be the law of his (man’s) nature, what arc here called the natural checks cannot possibly fail of being effectual. (Appendix to Third Edition and page 488 in Eighth Edition).

In his view there was in an average year never any appreciable surplus of food and as population, if unchecked, always increases faster than food supply the checks on population operate immediately. So there never could be “too many people on the earth” as we misleadingly suggested he held in the August Socialist Standard.

When he wrote his first Essay on the Principle of Population his aim was to show that the ideas of Condorcet, Godwin and others about the perfectibility of society were unsound because population is and must always be held in check by means which produce vice and misery (war, poverty, pestilence, etc.) Faced with the argument that population could also be held in check by abstention from marriage or postponement of marriage he had to contend that this too leads to vice and constitutes misery.

In his second edition he abandoned the latter argument and admitted that “moral restraint” does not lead to vice and misery. Having to find another case against Condorcet and Godwin he now maintained that such “moral restraint" is possible only in a society based on private property and the incentive of “individual interest”. Therefore it could not operate in an anarchist or communist society.

By this time he had largely lost his interest in Godwin and was more interested in population laws themselves. He was forced to admit that food supply could never increase as fast as unchecked population but in face of all the evidence he continued to maintain his general proposition that population is held in check.

Editorial Committee.
Posted by Imposs1904 at 2:17 PM No comments:

The case for industrial unions (1970) 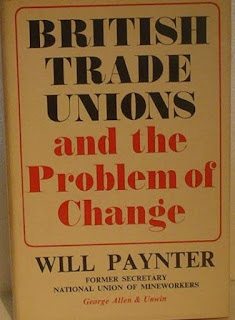 British Trade Unions and the Problem of Change, by Will Paynter. (George Allen & Unwin. 16s.)

Alongside these practical adaptations to the needs of the workers and to changes in the organisation of industry there has been a continuous flow of ideas propagated by groups of enthusiasts designed to harness the unions to wider aims going far beyond wages and working conditions; from the short-lived Grand National Consolidated Trades Union of the eighteen thirties, to the IWW the One Big Union Movement and Syndicalism.

When they wrote their History of Trade Unionism over fifty years ago, the Webbs hoped and believed that the Unions were moving towards the idea of one union for each industry, both on grounds of greater effectiveness and in pursuit of the Webb’s doctrine of workers’ control. Will Paynter, former member of the Communist Party and General Secretary of the National Union of Mineworkers and now a member of the Commission on Industrial Relations, set up by the Wilson Government, carries on from the Webbs. He presents an argued case for the Unions to remodel themselves on industrial lines in order to meet the growing concentration of capitalist industry and what he believes to be the permanent tendency of governments to intervene in wage fixing in the form of income policies and possible changes in Trade Union law. He supports his ease with much evidence of the harm resulting from the fragmentation of British trade unions, and from inter-union rivalries.

The Webbs hoped that one Union for each industry would emerge from amalgamations but in fact very little progress has been made since they wrote. The amalgamation have indeed taken place; in 1900 there were 1244 separate trade unions, now reduced to about 500, while T.U.C. affiliations have dropped from 184 with a membership of a million and a quarter to 155 unions with a membership of 9 millions. But the biggest growth has been in the conglomerate unions such as Transport & General Workers, the General and Municipal Workers and others with membership spread over numerous industries, with the result that from the standpoint of industrial unionism the position is as far as ever from what the Webbs expected. The TUC has on many occasions studied the problem but has always shied away from the task of trying to compel its affiliates to remodel themselves, knowing well that it cannot hope to compel the biggest unions to give up members. The TUC has also stressed the practical difficulty of defining what is an industry.

There are of course examples from other countries of what can be done. The Swedish Trade Union Confederation manages with only 37 affiliated National Unions and in Germany, where the trade union movement was rebuilt from scratch after the second world war, the Trade Union Federation has only 16 unions to cover the whole of industry.

Paynter accepts that what he advocates would be possible only if the TUC General Council acquired controlling authority over the Unions, something on the lines of the Swedish model which makes the central body the effective one for negotiating with the employers’ central organisation; at present the British TUC has no such powers.

What Paynter advocates comes up against two major problems. The first is that if trade unions are to be democratically controlled by their members, it is the members who have to be convinced that it is in their interest to adopt a new industry- based structure with effective authority handed over to the TUC, i.e. to a body ever more remote than their own union executives and officials.

The second is that any idea of trade unions pursuing wider social aims is limited by the fact that the great majority of members have, as yet, no revolutionary outlook embracing a complete change in the structure of society.

Paynter warns against what he thinks is another possibility, that the Unions, through close involvement with the employers and the government, may find themselves more or less government controlled, with, as its ultimate end, the corporate state of Mussolini’s Italy, Hitler’s Germany, and Franco’s Spain. (For some reason he does not mention Russia, where the “unions” are also in effect government agencies.)

Which brings us to the interesting question of Paynter’s own outlook. He makes many references to the class-struggle basis of trade unions, and the “socialist” aims of himself and some unions, and he chides "left” trade union leaders who are die-hards in their resistance to change. Yet he confines his proposals to “unionism under capitalist conditions in Britain”, though in the same context he writes of the purpose of trade unions applying “equally in a capitalist or a socialist society”. What he really means when he uses the term “socialism” is nationalisation, or state capitalism as in the nationalised industries. He supports the Labour Party.

He admits that coal nationalisation has made little difference to the miners:

“The relations between management and worker remained the same, the union still had to fight hard to get improvements in wages and conditions and little in the daily lives of the men reflected the change that had taken place.”

He admits too that nationalised industries are “expected to operate as commercial undertakings, generally on strictly business principles characteristic of capitalism”.

He is however candid enough to confess that he was one of the people who understood so little about what was going on as to display “a naive and immature judgement” at the time the mines were nationalised. He writes:

I remember the morning of January 1st 1947. the first day of operations with nationalised mines — standing on the top of a train of coal at one of the collieries. I served as a union agent, making an enthusiastic speech about ‘the dawn of a new era’, of the significance of the day being one where the ‘workers were moving forward to the control of their own destinies’, and that we were at the beginning of the process where capitalism would be replaced by Socialism.

The Communist Party now has no time for Paynter but it is interesting to see that at a time when he was one of their trusted leaders he had no more comprehension of what capitalism and Socialism are all about than he has now.
Edgar Hardcastle
Posted by Imposs1904 at 2:03 PM No comments: