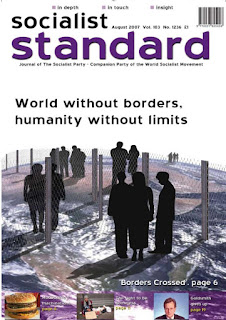 Might I make one or two observations on Stefan's excellent thought-provoking article (Free Access to What? Some Problems of Consumption in Socialism ) in the July 2007 issue. While free access to goods and services is a distinctive - indeed, defining - feature of genuine socialism, there is a danger of reading too much into this. We sometimes talk about this institution of free access being underpinned by material abundance - or the technological capacity to produce such abundance - but this can create a somewhat misleading and unfortunate impression of socialism being some kind of cornucopian consumer paradise in which our every whim will be accommodated. This is not so and I would hate to imagine that the case for socialism might be perversely interpreted as lending unintentional ideological support to the consumerist values that animate capitalism.

We need to distance ourselves from these kinds of unfortunate connotations that the term "free access" might conjure up. By "free access" is simply meant the absence of any kind of quid pro quo exchange relationship that underlies access to goods and services in capitalism. While one's access to goods and services in socialism will not be linked to one's productive input this does not mean a severing of consumption and production. Even today, in a capitalist society, producers are not really a separate set of individuals from consumers. Yes, I know there is the complicating factor of the non-productive capitalist class of conspicuous consumers, but by large most people are both consumers and producers. However, the atomistic tendencies within capitalism foster a kind of schizoid attitude towards production and consumption in as much as we see these as quite separate spheres with wage labour in the productive sphere being merely a means to an end - to gain an income with which we can purchase commodities in the consumption sphere.

In socialism, this conceptual split between consumption and production will tend to disappear along with an atomistic or egocentric view of the world inculcated by market competition itself. In socialism, of necessity, we will recognise far more clearly and starkly than is the case today that we mutually depend upon each other and that we all benefit by ensuring the needs of our fellows are met. Such empathetic understanding will promote a kind of virtuous circle of sustainable development and is precisely why I would characterise socialism as a moral economy.

In practical terms that might well mean ceasing or curtailing the production of certain kinds of goods - as Stefan suggests - in order to ensure the increased output of higher priority goods. Indeed, a socially agreed hierarchy of production goals will be a very important influence on the allocation of relatively scarce resources. A self regulating system of stock control will reveal the availability of different factor inputs and enable decision makers to identify those inputs which most constrain or limit the output of any given good. If the supply of a particular input is scarce in relation to the different demands placed upon it, it makes sense to be able to sort these different demands into some sort of order in which they ought to be met. This is precisely where a socially agreed hierarchy of production goals will come into play with priority in resource allocation being given to important goals such as meeting basic human needs (like providing adequate nutrition and housing) possibly at the expense of other less important goals such as the production of certain luxury goods. The less important such goals are the more likely are they to be starved of the necessary resources for their manufacture.

Which leads me to my final point. Stefan refers to the possibility of "restricted access" to certain goods possibly involving a coupon system. It occurs to me that an important criteria for such restricted access may derive from what I call a "compensation model". Basically it boils down to this - that in socialism we will inherit many of the spatial inequalities of capitalism and indeed may have to cope with this for some time. An obvious example of this is in the form of housing stock. Houses today are highly variable in quality. For a while at least, some people will still have to live in relatively poor quality housing.

The compensation model suggests that, in return for having to put up with living under these relatively disadvantageous circumstances, such individuals should be compensated in terms of having priority access to those goods at the luxury or frivolous end of the socially agreed hierarchy of production of goals. This is not only a question of natural justice; it will help to ease some of latent tensions that might arise in the development towards a fully rounded and mature socialist society.