Post-Capitalism: Parecon or a World without Money? Which way to a classless society? 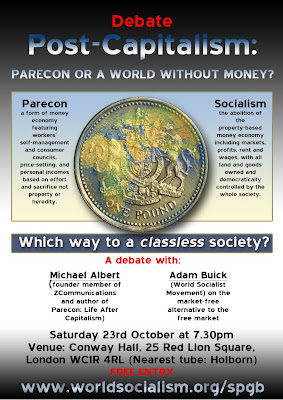 POST-CAPITALISM: PARECON OR A WORLD WITHOUT MONEY?
Which way to a classless society?
Debate with Michael Albert (founder member of ZCommunications and author of "Parecon: Life After Capitalism") and Adam Buick (World Socialist Movement) about the alternative to capitalism.
PARECON
- form of money economy featuring workers' self-management and consumer councils, price-setting, and personal incomes based on effort and sacrifice not property or heredity.
"In the world you desire to attain there is, I presume, production. Likewise, I assume you agree that people will consume. More, beyond production and consumption, is there some regulation of what is produced and in what quantity? The alternative would be that anyone can produce anything, with no concern other than that they wish to. This is nonsense, but if there is regulation of how resources, energies, and labor are allocated to generate outputs, does that regulation reflect the preferences that both producers and consumers have and especially a full valuation of the relative contribution to well being and development of different choices? If it does, then to that extent it includes "money." The valuations are prices, albeit not necessarily as we have known them in market and centrally planned systems".

Michael Albert (ZCom)
SOCIALISM
- the abolition of the property-based money economy including markets, profits, rent and wages, with all land and goods owned and democratically controlled by the whole society.
"In implementing the long-standing socialist principle of “from each according to their ability, to each according to their needs”, socialist society breaks the link between work done and consumption. Rather than being “allotted” what to consume as under “Parecon”, people would be able to take from the common store of wealth set aside for individual consumption what they judged they needed to live and enjoy life, irrespective of what they had contributed to production. Every able-bodied person would be expected to contribute something, but we don’t share your bleak view that, in this event, not enough would be produced to satisfy people’s needs (that “demand would exceed supply”, as you put it) - and that therefore, not just profits, but the wages system too would have to be retained as a means of both obliging people to work and of limiting their consumption. Just like under capitalism.
Our description of “Parecon” is “post-capitalist capitalism”, i.e. not post-capitalism at all".