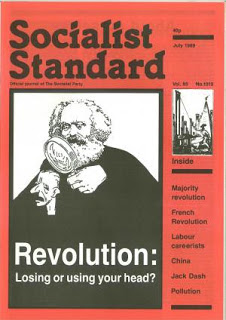 In the early hours of 4 June, soldiers of the Chinese army moved against the demonstrators who had been encamped since the end of April in Tiananmen Square in the centre of Peking. It had been widely expected that there would be a final confrontation between government forces and the students and others who had repulsed previous army attempts to uproot them. But few had anticipated that the army's action would be so brutal, with tanks and flamethrowers being used on unarmed civilians. Onlookers were cut down indiscriminately with those who attempted to resist. Thousands perished; nobody will ever know how many, as charred and disfigured corpses were hurriedly disposed of and hospitals were overwhelmed by the injured and dying. In the annals of capitalist bloodletting, this day in Peking will hold a place of its own.

The events had begun peaceably enough with marches in commemoration of the former Party Secretary Hu Yaobang. a supposed "liberal". They gradually grew, with more and more students boycotting classes, till there were demonstrations in many cities on 4 May, 'the anniversary of the day in 1919 when students demonstrated against the dispositions of the Versailles Peace Conference, a date usually seen as the beginning of Chinese nationalism. Hu's successor Zhao Ziyang expressed sympathy with the student's demands for an end to corruption and for greater democracy (an aim never given much clearer formulation). "Hard-liners" in the government, such as Prime Minister Li Peng, insisted that just a handful of disruptive elements were stirring things up. This was exposed as nonsense when on 17 May over a million people marched through Peking. Li's faction declared martial law (which had never been done in Peking before), but the first army units sent on to the streets of the capital were unwilling or unable to enforce it fully, as workers set up roadblocks and dissuaded soldiers from attacking them. Public transport virtually ceased, and many shops were closed. The power struggle within the ruling echelons of party and state seemed at first to favour Zhao, but he was apparently placed under house arrest as the hard-liners, led by Li and the power behind the throne Deng Xiaoping, seized the upper hand. Troops from outside Peking were drafted in, as the preparations for the final putsch were made. And the fateful day of 4 June arrived.

Government leaders kept studiously quiet just before and after the massacre; there were rumours that Deng was seriously ill. It looked as if a group of geriatric rulers had determined to preserve their own power at all costs, with little thought to the slaughter that would ensue, the prospect of a country in chaos, the watching TV cameras and the effect of China's "open door" policy towards overseas investment. This was somehow different even from Hungary in 1956 and Czechoslovakia in 1968, for it involved Chinese troops killing Chinese workers. Even when Peking was captured by "Communist" armies in 1949, there was no shooting on the streets of the capital. Now the "People's Liberation Army" was slaughtering those it was ostensibly supposed to protect.

State Capitalist Ruling Class
Not that such armed repression is anything new even in the recent history of China. The savage military attacks in Tibet are only the most blatant example of the government's willingness to use violence to maintain its position. Many participants in earlier movements for "greater democracy" from the late seventies and early eighties are in prison or labour camp. The death penalty exists for a wide range of acts and is frequently applied. Nevertheless, the scale of the Tiananmen carnage has ensured that it will have an unprecedented impact on Chinese workers.

These workers have seen so many of the rulers getting rich quick as market oriented reforms open the way to corruption and black-market dealing. Only the bureaucrats have the opportunity to buy large quantities of goods at subsidised prices and sell them at massive profits on the open market. At the same time, the new economic arrangements have increased the sense of insecurity felt by so many. Yet, apart from the pervasive opposition to official corruption, there is no sign that the protestors were making economic demands. The call for a free press and other "rights" provided for in the constitution were the central issues for which workers fought with such dignity and heroism.

What crimes are committed in the name of liberty, exclaimed Madame Roland when on the way to be guillotined in the French Revolution. Even more horrendous are the crimes committed in the name of Socialism. The butchery in Peking is only the latest in a long series of acts of violence and brute force by state capitalist ruling classes against workers who dare to take the first tentative steps of resistance. Capitalism usually does not need to use such naked brutality to keep workers in their place, though is of course prepared to do so when necessary. But it is the courageous victims who will be remembered, not their vicious and barbaric murderers.
Paul Bennett
Posted by Imposs1904 at 5:10 AM No comments: